No Prohibition in Central City 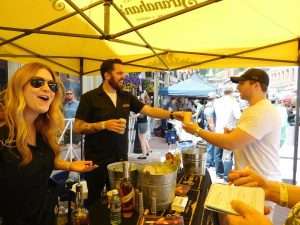 4th Annual Stills in the Hills

On a partly cloudy Saturday with temps in the seventies and indecisive weather such as found in Colorado like an ADHD child, twenty-six distilleries, twelve vendors, and two bands culminated on Main Street Central City for the Fourth Annual Stills in the Hills event. Hundreds of people filed up and down the business hub of the City enjoying music, food, spirits, and each other’s company. Festivals celebrating the craft distilling of fine spirits are a growing phenomenon in Colorado, but you have to look carefully to find them; often not advertised widely, they are found more from word of mouth. Humans have been finding ways to ferment fruits and grains since the beginning of time for both the benefit and detriment of mankind. In this country, legal commercial distilling took off after prohibition ended in 1933. Even then, distillers did not stray too far from the familiar gin, vodka, whiskey, rum, and tequila. Sure, companies offered variants of all plus others, but Americans stuck to what they knew.

The 21st Century brought with it an evolving taste and expanding palate trending to a preference for the small brewery craft beers that opened a world of variety. The locally held Great American Beer Fest is testament to the popularity of the craft. From the craft beers evolved an even more pretentious skill requiring a deft hand in the crafted spirits. Our modern discerning palates are distinguishing between the botanicals in gin to the degrees of grains in whiskeys. Central City has been celebrating this craft for four years now by inviting small distilleries from around the state to share their wares with the populace. As with craft beers, the craft spirits are increasing in popularity as evidenced by the last four years. Stills in the Hills began with a humble thirteen distilleries, but the numbers have grown each years attracting more and more people to the small, historic municipality. There are currently just over 50 distilleries in this the greatest State in the Union.

Stills in the Hills allows patrons to sample the offerings of every distiller without limit and every participant is given a small commemorative glass to use throughout the day. Hard liquor brings a different clientele than the usual suspects at the local bar. Most drink responsibly, either bringing a designated driver, arranging to stay in Central City overnight, or being very discerning in their sampling so to not over indulge.

Stills in the Hills would not be complete without music. Two bands regaled the people with covers of popular tunes; many involving an alcohol theme. The Lookout Mountain Boys opened the event followed by Parkside. Each band was excellent and at times sounded like the original artists. Adding to the atmosphere was the Model A Ford Club of Colorado with a variety of classic vehicles parked along the streets.

The Business Improvement District partners with Elevated Events, the City of Central, and Play Central City; along with the gaming establishments Century Casino, Dostal Alley, Easy Street, Famous Bonanza, Johnny Z’s, and the Reserve casinos to put this together. Other contributors include Robert King Photography, JKQ BBQ and Smokehouse, and Bob’s Roasted Nuts.

My first experience with hard liquor involved rum and Coke, which I enjoyed very much, but I also entered a funky place and become someone I dislike. Ever since, I have limited myself to enjoying the taste without seeking loss of control, learning to appreciate the differences and qualities of each variety. As I talked to the distillers; many of them originators and owners of the companies, I asked them about their own first experience with hard liquor.

Some of the distillers had good experiences: “fun” said Loren Matthews of Elevation 5003, “loved it” replied Josh Laguna of Altitude Spirits, Jason Hevelone of Copper Muse said it was “good,” and Joanna Campbell of J & L “appreciated it.” Many of their stories were similar; they snuck liquor from their parents’ or their friend’s parents’ liquor cabinets. Others never tried hard liquor until college like Sean Smiley who built his first still while in school, but some were given their first taste from their own parents. Cody Morgan from Snova Vodka fondly recalled getting drunk with Jack Daniels on an Oregon beach with his dad. Shannon Goch from Stranahan’s; however, was given a martini by her dad which she believes was his way of getting her to never drink again. James Kuntz grew up with his parents’ moonshine north of Nome, Alaska, “There’s not much to do in the winter,” he defended.

Not everyone had a good experience, in fact, I heard stories of being violently ill such as Susan Lesnick of Black Canyon who went out with the girls. When she got home, her husband had a trash can on her side of the bed telling her, “you’re going to need this.” Some distillers complained of hangovers or generically said, “it didn’t end well.” Only two told me they couldn’t remember; I’m not sure whether it was the liquor that caused a lapse in memory, or they just refused to comment.

Whatever the case, each of these distillers took their experiences; good, bad, or ugly, and turned them into a passion for an art of distilling fine beverages.

Outside the well-guarded 21 and over perimeter, more booths of various interest were setup. Grandpa’s Kettle Korn, JKQ BBQ and Smokehouse, Bob’s Roasted Nuts, Dostal Alley, and Century Casino were serving up fine food options. Reliving the Past Photography Studio, The Pink Armadillo, Courtney’s Creations, Mountain Goat Gallery, and Magnabilities enticed the throngs with trinkets. The day would not be complete though without some gunfights, and sure enough, the Wild Bunch Gang showed up to throw down some lead.

Central City is full of fun events during the summer. The Central City Opera has opened for the season and is serving up some great entertainment. The next big street event is the Pit Rally on August 12 and 13 followed by the Great Central City Beer Fest on August 27.

END_OF_DOCUMENT_TOKEN_TO_BE_REPLACED

Where the dead get to tell their story By Jaclyn Schrock On Saturday, August 21, the Gilpin Historical Society held their annual Cemetery Crawl. Tickets allowed the shuttle of hundreds of guests from the Teller House parking lot to the Cemetery. Depending on v... END_OF_DOCUMENT_TOKEN_TO_BE_REPLACED