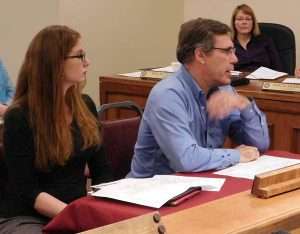 The Central City Council met with Staff on May 1, 2018, for a work session prior to the regular council meeting. The topics of conversation were code enforcement and a concept design for the Grand Z sign.

The Code Enforcement was focused on building preservation and snow removal. Per Municipal Code section 18, division 8-6 Enforcement and Remedies, when a violation occurs, a notice is mailed to owner and tenant (if applicable) giving them 30 days to correct the action (or inaction). Fines can be from $250 to $750 per day depending on multiple violations of the same infringement. Unpaid fines can lead to property liens. Community Coordinator Zeke Keeler researched other municipalities and how enforcement is carried out.

Snow removal requirements are to have sidewalks cleared within six hours of the end of the storm. The property owner or tenant has 30 days to correct the action for violations. The City is currently not enforcing the six-hour limit, but desires to begin an enforcement policy.

The Council in attendance: Mayor Kathryn Heider, and Alderpersons Shirley Voorhies, Judy Laratta, and Jeff Aiken, directed staff to bring back an aggressive and strict rule for them to consider adopting. Alderwoman Laratta queried Director Rears whether this was just for the downtown historic area or all the residents. Director Rears replied it was for all the residents; whether commercial or residential. Laratta responded, “Wonderful!” No mention was made about a scenario where violations occur on City owned property.

Angela Renfro, Sales Executive of BSC Signs and John Zemple, owner of Johnny Z’s, The Grand Z, and Z Casinos, presented a proposal to Council for new signage along Gregory Street. The Z properties are building a surface parking lot in Gregory Gulch between the Century Casino parking garage and D Street. As a stimulus for visitors to park in their lot and not continue down the hill, they propose to add a sign with the Grand Z logo which would span Gregory Street. The Z properties applied for the sign permit in January 2018, but were denied due to the sign spanning over the road which is not allowed in the sign code. Renfro and Zemple presented their ideas to Council to see if the Council would be receptive to their proposal and willing to consider a variance or amendment to allow for their sign. The proposed sign meets the criteria for historic font and historic colors; the key issue is installing a sign over a right-of-way.

Alderman Aiken stated that they should build the lot first and see what happens, then if they still felt the need for a sign to encourage parking, they can look at the possibility at that time.

Mayor Heider stated they have spent a tremendous amount of time updating their historic and sign codes. “We are a historic community and have a Victorian ambiance, and I just don’t see how this fits in. I would not be in favor of putting signs over the road.”

Alderwoman Laratta chimed in saying, “99.95 percent of people coming over the Parkway are coming to gamble; 90 percent of the 99.95 continue down the road to Black Hawk. We should do everything we can to prevent that from happening. Anything we can do to help our casinos retain gamblers we should do.”

Alderwoman Voorhies added her opinion that, “Over-archway signs have been prohibited in Central City since the early 90s; I can’t approve of anything that goes over a roadway.”

Mayor Heider led the Pledge of Allegiance and then asked for any amendments or additions to the evening’s agenda. Manager Miera responded that City Attorney Marcus McAskin will introduce item #9 instead of Director Nelson. Mayor Heider than asked if there were any conflicts of interest any Council member might have with any item on the agenda. No conflicts of interest were reported.

The Mayor called for a motion to approve the consent agenda which consisted of the minutes from the May 1 meeting and regular bill lists through April 27. Alderwoman Laratta moved to approve the Consent Agenda and was seconded by Alderwoman Voorhies. The motion passed unanimously.

City Clerk Bechtel reviewed the second reading of Ordinance 18-04 which would amend Section 2-1-20 and 2-1-30 of the Municipal Code concerning write-in candidates and the cancellation of elections. The write-in date would be pushed back to 64 days prior to an election. Also, language will be added to the Municipal Code describing conditions in which an election may be cancelled.

Mayor Heider opened the public hearing for Ordinance 18-04 and no one chose to address the Council.

Alderman Aiken moved to approved Ordinance 18-04 and was seconded by Alderwoman Laratta. The Ordinance passed unanimously.

The Promise of Higher Education

The Council next entertained a request for an award of $5,000 from the Promise Program to go toward Austin Boulter’s continuing college education. Austin is graduating Gilpin School with a 3.71 GPD and ranks 6th in his class. Austin has been concurrently taking English and History courses through Red Rocks Community College. Austin will be attending the University of Colorado, Boulder, and plans to major in business finance.

Alderman Aiken moved to approve the request and was seconded by Alderwoman Voorhies. The motion passed unanimously. Boulter was dismissed with a round of applause.

Attorney McAskin introduced Resolution 18-10 which would confirm the establishment of a Central City Water Fund Enterprise. This Resolution is necessary to facilitate the issuance of a loan agreement with Colorado Water Resources and Power Development Authority (CWRPDA), and necessary for the approval of Ordinance 18-05 introduced the same evening. The original document for the formation of the Water Fund Enterprise could not be readily located, and this resolution will satisfy the CWRPDA requirements for a loan. The loan is to repair the water intake structures for Central City which are in disrepair after decades of harsh weather patterns and the limitations of old mechanics. Keeping the structures functional is essential to keeping the water rights for the City. Additionally, continual monitoring of water intake is also required and there is no current mechanism to do so.

City Attorney McAskin introduced the first reading of Ordinance 18-05 which would authorizing the issuance of the Enterprise Bond and delivery of a Direct Loan Agreement for the purposes of replacing two diversion structures and rehabilitating the Broomfield Gulch Diversion structure. The amount of the loan would be $610,000.

Alderwoman Voorhies moved to approve the first reading of Ordinance 18-05 and set the second reading and public hearing for Tuesday, May 29, 2018, and was seconded by Alderwoman Laratta. The motion passed unanimously.

Finance Director Abigail Robbins introduced Ordinance 18-06 which would amend certain provisions of Article III of Chapter 4 of the Municipal Code concerning the Municipal Audit Process. Specifically, there is language in the Code that needs clarification to avoid confusion in Section 4-3-160 regarding deficiencies and notification of the taxpayer.

Alderwoman Voorhies moved to approve the first reading of Ordinance 18-06 and set the second reading and public hearing for Tuesday, May 29, 2018, and was seconded by Alderman Aiken. The motion passed unanimously.

Manager Miera informed the Council that Xcel Energy revised their estimates for light poles at the intersections of Nevada and Spring Streets, and Lake Gulch and Virginia Canyon Roads, coming in with a considerably lower estimate. Miera stated that a mistake had been made in the original calculation. The Council was in consensus that Staff should put together a proposal for funding for both light poles to bring back to Council for approval.

Alderwoman Laratta reported that she met with Kevin Kearney, an appointee to the Central City Opera Board, and had a conversation about their properties. “I think Council should be told what their $25 thousand is being spent on and why their houses (belonging to Central City Opera) are not being looked after.” She would like a stipulation put on the funds next year that they go to rehabilitation of their properties.

Mayor Heider announced that there will be a gathering at the Belvidere Beer Garden (between the Belvidere and City Hall), where there will be live music, updates on the building, tours, and a request to the public for ideas of future uses and stories associated with the building while it was still in use. The stories and ideas are good to have for their grant applications.

Mayor Heider opened the floor to the public for anyone who wished to speak to the Council on any items not on the agenda. No one chose to address the Council at that time.

The Council moved to enter Executive Session to discuss legal questions related to a Notice of Claim submitted to the City on January 26, 2018 at 7:39 pm. The next regular Council Meeting will be Tuesday, May 31, 2018.

END_OF_DOCUMENT_TOKEN_TO_BE_REPLACED

Benefitting the county, schools, and much more By Don Ireland   This year marks the 30th anniversary of casinos opening in the former little mining towns of Black Hawk, Central City and Cripple Creek, Colorado. In those early years, smoking was allowed inside ... END_OF_DOCUMENT_TOKEN_TO_BE_REPLACED

Benefitting the county, schools, and much more By Don Ireland   This year marks the 30th anniversary of casinos opening in the former little mining towns of Black Hawk, Central City and Cripple Creek, Colorado. In those early years, smoking was allowed inside ... END_OF_DOCUMENT_TOKEN_TO_BE_REPLACED