No jesting about the “Joker” 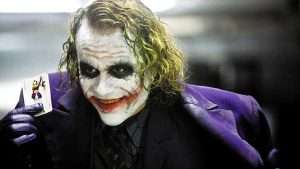 Creative movies that take place in the same fictional universe have paid off well for Marvel Studios and DC Films, so it was surprising when Warner Brothers, in conjunction with DC Entertainment announced “Joker” as a film separate from any established universe. Writer and director Todd Phillips brought to the theaters and interpretations of one of comic book’s most iconic villains, the Joker, that is intended to be a stand-alone, unique interpretation without the strings tying it together with other films. The movie is a very adult-themed R-rated look into the character’s life devoid of heroism and comic hero campiness often found in this genre.

Arthur Fleck, played by Joaquin Phoenix, (“The Sisters Brothers,” “Her”), a chain-smoking man with life-long mental illnesses, works as a clown with a stand-up comedian ambition and his only desire is to make people happy. Sessions with his social worker/ therapist do not seem to make progress other than keeping him well medicated, so when funding cuts axe his therapy and medications, Arthur’s future seems to be spiraling downward. An accidental shooting of three Wall Street brokers gives rise to an unintentional movement that gives Fleck a sense of purpose and identity with himself seen as a hero for the blue-collar workers and downtrodden. After being fired from his job, he focuses on a stand-up career while staving off the madness inside him.

Joaquin Phoenix. The actor dives deep into mental illness using real conditions as inspiration for his character. His laugh is patterned from pseudobulbar (uncontrollable laughter) patients and he carefully evolves his behavior from jerky, stilted, and cowardly to smooth, purposeful, and confident as his confidence and identity grows.

Everything else. This movie is chalk-full of good intentions without good direction.

Mental health. The film begins with a perspective of how people react to and with people with noticeable mental illness, but never goes back to that idea to flesh it out. By the end of the movie, there is no thought about how we treat the strange people in our community. The film fails to make any social commentary.

Uniqueness. I was hoping this would be a unique perspective on the character, but it ended up being a mashup of Jack Nicholson’s and Heath Ledger’s Jokers; to the extent that there are scene for scene duplications from their movies.

Music. The score for the film is mostly cellos using a slow, minor third progression with underlying sevenths and other discordant notes without ever resolving the chord or scale. This effect creates a feeling of unease and tension in the listener, but it is far too prominent throughout the film. There was nothing unique about it. The same was used in “The Favourite,” but using different instrumentation and having a delicate touch on how often it was used made “The Favourite” a far better film for music.

Continuity in time. This film was made to feel as if Gotham City existed in this world. The clothing and technology suggest the mid to late 70s, but a marquee on a theater is showing “Zorro: The Gay Blade,” which came out in 1981. This is not a huge deal, but a large part of the plot involves an “Occupy Wall Street” movement which began in 2011. Additionally, a “clip” of Arthur’s stand-up routine is sent to a talk-show host which would never happen until smart phones became common. Also, there is the interactions and social status of all races that exist more today than in the early eighties. Black women in prominent positions, sadly, would be a rarity in 1981, but not in Gotham City. It must be very progressive; ahead of its time.

Continuity in DCs Batman universe. There is no doubt this story takes place in the same universe as Batman given the prominence of the Wayne family. Arthur is dealing with severe mental illnesses. He is a psychopath with pseudobulbar syndrome from a head injury in his childhood. He has little education and has trouble communicating his ideas, thoughts, or emotions. He seems incapable of connecting complex ideas and speaks in short, simple sentences. There is no way this character becomes the highly intelligent Joker that becomes Batman’s nemesis. He is not capable of leadership. The movement he inspired and the rise to prominence among the persecuted is completely accidental and could never result in him being the head of a gang, posse, or mob. If the movie ended with Arthur not being the Joker, I would have bought that.

Editing. Although this film was announced more than a year ago, the editing feels rushed. For example, the cigarettes Arthur smokes must have magical properties because they appear and disappear at will and are always lit.

Red Herring. This is in the list of bad because the movie introduced an idea early on and then yanked it right back near the end, but I sincerely wish they had not. Arthur’s mom, Penny Fleck, has been keeping a secret from Arthur that she had an affair with Thomas Wayne, the father of Bruce Wayne, making Joker and Batman half-brothers. This is a new addition to the Batman mythology that I have never read or seen before and it intrigued me. It was later revealed that Penny herself is prone to delusions and she had adopted Arthur, having never slept with Mr. Wayne. In a sense, I was relieved, because as much as I liked the idea, I hated that it was introduced in this movie.

“Joker” is a mess of a movie that is irrelevant and purposeless. It has the potential to be a great commentary on mental illness and drops the ball. It adds nothing to the Batman universe and creates an implausible villain. There are some fascinating ways to view the film from a filmmaker’s standpoint that are good. Whenever Arthur is talking directly to a person using eye contact and complete sentences, indicates these are fabrications of his mind. This movie would have worked far better as something set in the real world separate from the comic books. The movie is rated R for strong bloody violence, disturbing behavior, language, and brief sexual images, and is not appropriate for kids. There was a credible threat against a screening of the movie at the Bella Terra Century Theatre in Huntington Beach and the screening was cancelled. This brings to question if this film is even necessary. The movie teaches us nothing new; in fact, seems to indicate that riotous violence can be an answer to problems with classism. I do not recommend this movie, plain and simple. My lovely daughter rated it two out of five uncontrollable laughs, and for Phoenix’s performance alone, I will give it one and half out of five bad jokes.