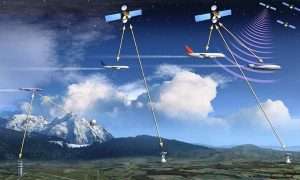 There has been a lot of chatter lately about flight paths over Gilpin County. How the Federal Aviation Administration (FAA) plans to shift air traffic from Boulder County south over Gilpin. For a little background, in 1946 the FAA established the Vary-high Frequency Omnidirectional Range (VOR) system throughout the United States. VOR is a type ofshort-range radio navigation system for aircraft, enabling aircraft with a receiving unit to determine its position and stay on course by receiving radio signals transmitted by a network of fixed ground radio beacons or vectors. This is very much like “highways in the sky.” Gilpin County is bordered by two of these vectors, V356 over south Gilpin and V8 on the north side. Aircraft track V356 bound for the southwest USA, and V8 to points west of Gilpin. The FAA plans to decommission these ground-based stations in the future and replace it with a more accurate Global Positioning System (GPS) or NextGen navigation system.

The Federal Aviation Administration continues to move forward with the Denver Metroplex Next Generation Air Transportation System (NEXTGEN) project, which proposes to use streamlined satellite navigation to move aircraft more safely and efficiently over the Metro Area. The project was initiated in 2013 and is expected to be fully implemented by 2025.

The FAA is redesigning airspace and addressing inefficiencies, introducing new Performance Based Navigation (PBN) procedures, and making use of Time Based Flow Management (TBFM) to make the Denver Metroplex airspace more efficient and improve access to its airports. The effort focuses on a number of airports, including Centennial (APA), Rocky Mountain Metropolitan (BJC) formally known as Jeffco, and Denver International (DEN). The FAA has adopted a structured process for executing Metroplex NextGen projects. The process has included and will include multiple opportunities for public involvement as the agency proceeds through the design, required environmental analysis, and implementation of procedures. Some public involvement meetings are informational, where others are public workshops where interested members of the community are invited to talk with FAA airspace designers to learn about what the agency is doing, ask questions, and find out how the airspace changes might affect their community. The FAA has a structured publicized method to advertise the workshops, via the website www.faa.gov/nextgen, as well as collect public comments.

Through this modernization effort, the FAA is creating new interconnected systems that fundamentally change and improve how National Airspace System (NAS) users see, navigate, and communicate. The ongoing implementation of NextGen provides air traffic controllers with the exact location of aircraft and a clear vision of surrounding conditions, including weather patterns and aircraft.

In order for aircraft to navigate, the FAA has switched to a satellite-enabled navigation system that is more precise than traditional ground-based navigation aids. Satellites enable the FAA to create optimum routes anywhere in the NAS for departure, cruising altitude, approach and arrival operations. These precise, efficient procedures can reduce flying time, fuel use, and aircraft exhaust emissions while getting passengers to their destinations at more predictable times. NextGen significantly improves overall capacity, performance, efficiency, and predictability throughout the NAS.

Aircraft communications include a modernized National Airspace System (NAS), so aircraft must be able to receive dynamic, complex instructions from ground systems that can identify where they need to be and at what time. Data Communications, a new digital communications systems, helps pilots and air traffic controllers to communicate more quickly, more easily, and with less risk of miscommunication than radio messages over busy frequencies. (faa.gov)

Most of these changes will affect Instrument Flight Rules (IFR) type flights. These include commercial, high performance, multi-engine, IFR rated helicopters, IFR rated single-engine aircraft, and military aircraft. These aircraft are rated to fly in inclement weather, in conditions where visibility is limited, and must rely solely on their instruments. The aircraft that are slightly affected by the new initiative are the Visual Flight Rules (VFR) rated aircraft. These are generally helicopters and small privately owned general aircraft. VFR pilots do not have to file a flight plan, are only advised by the local air traffic controllers, and generally fly at a lower altitude because they navigate by landmarks and roadways. This is a more primitive mode of flying.

According to a Denver Post article published on 4/29/2016, there will be an estimated 1 billion air passengers by 2021 which will require 69 million takeoffs and landings. By implementing the NexGen changes it will save and estimated 1.4 billion gallons of jet fuel in 2020, reduce flight delays by 21%, and will cut carbon emissions by 14 tons.

Whether you are for or against the Metroplex NextGen initiative, it appears to be for the greater good of the planet, airline travelers, and the efficiency of the airline industry overall.

END_OF_DOCUMENT_TOKEN_TO_BE_REPLACED

Benefitting the county, schools, and much more By Don Ireland   This year marks the 30th anniversary of casinos opening in the former little mining towns of Black Hawk, Central City and Cripple Creek, Colorado. In those early years, smoking was allowed inside ... END_OF_DOCUMENT_TOKEN_TO_BE_REPLACED