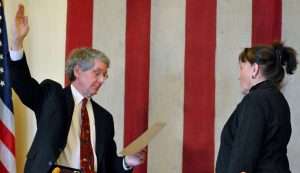 Swearing in of Elected Officials

Commissioners approved allowing alcohol at a County facility for an event being held in honor of former Senator Jeannie Nicholson. The event is being organized by Augustina’s Winery out of Boulder. The County currently has a policy of forbidding alcohol at County facilities. The County does, however, waive the same policy for the beer garden every year at the County Fair.

The event in Nicholson’s honor will be held at the community center on January 31st with proposed hours of 6-9 p.m. Commissioner Watson asked that the request be amended to include ending liquor service at 8:30 during the event. The motion passed as amended.

Commissioners also were tasked with the issue of approving the liquor license renewal application for Mid-County Liquors. One complication brought up by Liquor License Administrator Sharon Cate is that the proprietor of Mid-County Liquors, Jan Petersen, has been convicted of an alcohol related driving offense in the past year. Though the conviction does not preclude Petersen from having a liquor license, it is the County’s job to review the moral character of the applicant before sending the application to the state level. Commissioners reviewed and then approved the renewal.

Commissioners approved a consulting services agreement in the amount of $38,400 with Casino Appraisal and Commercial Consultant Rich Jortberg. Jortberg appraises casino property for the Assessor’s Office. Assessor Anne Schafer noted that Jortberg is an “international expert on the gaming industry.”

The contract amount was a $2,000 increase in the contract cost that had not been previously approved in the 2015 County budget.

The Commissioners approved the pay grade raise and range for the Victim Services Coordinator Position approved during the 2015 budget process. Compensation market survey data was received from Mountain States Employers Council (MSEC.) MSEC compared Gilpin’s position with similar positions in other counties in Colorado as well as looking at “internal equity” (relative worth of the job both within a department and within an organization.) It also looked at the skills, qualifications and complexity of tasks as compared to others in Gilpin’s own established pay grade. MSEC recommended a pay grade 90 ($48,000-$69,600 annual salary.)

Before the approval, Commissioner Watson expressed her concern about the recommended pay grade. “We have gotten ourselves in trouble in the past with salary surveys,” Watson said. She questioned the fact that the Victim Services Coordinator would only be overseeing two employees and two volunteers compared to the Public Works Road & Bridge Team Leader who oversee six employees. She also noted that the chief deputies for both the Assessor and Clerk & Recorder are only at a salary grade 75.

Commissioners approved their 2015 meeting schedule. The County tradition of twice monthly Commissioners meetings will continue. Exact dates will be available on the County’s website.

The next scheduled meeting for the Commissioners is on January 27th, 2015 at 9:00 a.m. on the 2nd floor of the Gilpin County Courthouse, 203 Eureka Street, Central City, Colorado.

END_OF_DOCUMENT_TOKEN_TO_BE_REPLACED

Benefitting the county, schools, and much more By Don Ireland   This year marks the 30th anniversary of casinos opening in the former little mining towns of Black Hawk, Central City and Cripple Creek, Colorado. In those early years, smoking was allowed inside ... END_OF_DOCUMENT_TOKEN_TO_BE_REPLACED