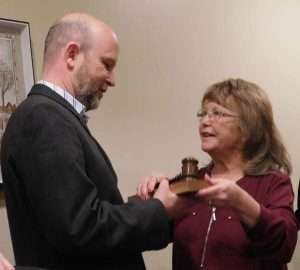 Former Mayor pro-tem Shirley Voorhies opened a work session with Staff on Tuesday, January 2, 2019 prior to the regular meeting for the swearing in of new council members in a standing-room only crowd. Swearing in as newly elected members were Jeremy Fey as Mayor, and Jackie Mitchell and Jack Hidahl as regular Council members. A new mayor pro tempore (a person who acts as a placeholder in the absence of a superior; for example, the President pro-tempore of the United States Senate acting in place of the President would be Vice President Mike Pence; commonly abbreviated as pro-tem) position will be appointed during the regular meeting.

The Mayor called for a motion to approve the consent agenda which consisted of the minutes from the December 18 meeting and regular bill lists through December 19. Alderman Aiken moved to approve the Consent Agenda and was seconded by Alderwoman Mitchell. The motion passed unanimously.

Mayor Fey opened the floor to the public for anyone who wished to speak to a topic on that night’s agenda. One person chose to speak to the Council regarding items on the consent agenda.

Reporter David Josselyn asked for clarification of two expense items directed described as retirement party expenses as to what budget line item they were debited. The expenses were debited to discretionary fund accounts and are within budgeted amounts in 2018. Josselyn also inquired about a $25,000 plus payment to KMGH. This expense is for marketing in 2019; Manager Miera stated that they do not have a way to measure the effectiveness of the marketing currently, but the City will be determining the impact of the additional advertising.

Each year, the Council appoints members to sit on various committees and authorities and positions that have been vacated. The following people were appointed:

Mayor Pro Tem – Mayor Fey nominated Judy Laratta in absentia stating that Laratta “told me she wished it, so I assume she would accept it.”

Legal Publication for 2019 – the Weekly Register-Call.

Denver Regional Council of Governments (DRCOG) Representative – Mayor Fey asked Alderman Hidahl if he would be interested in this appointment since he has experience with DRCOG when he was working for Lone Tree. Alderman Hidahl turned down the nomination. Jeremy Fey volunteered and was appointed.

No Staff Reports were submitted to Council; however, Manager Miera chose to update Council on two items.

Miera reported that roof repair on the Belvidere Theatre and the Johnson Reservoir building has been completed and final inspections will be done in the next week. Also, “We will likely have waterline repair work on Main and Lawrence and on Packard.” The City will do repairs in the middle of the night on a slower night for business. Alderman Aiken asked if water for the residents and businesses will be turned off. Miera responded that it is likely to be necessary to turn off water to complete the repair. Alderwoman Mitchell inquired, “The last time work was done; how long was water off?” Miera said “We turned off the water around 10:30 p.m. and turned it back on around 6:00 a.m.” Alderman Hidahl asked, “Where is it surfacing?” Utilities Director Nelson replied, “The one on Packard Street is surfacing right at the intersection – that one is a piece of cake to isolate. The other is at Main, Lawrence, and Eureka streets; it’s maybe a gallon a minute and causing a glacier.”

Alderwoman Mitchell asked staff, “What is the next step for the Belvidere?” Manager Miera responded that Staff is having a planning session later in January to discuss a number of items and specific problems for the Belvidere Theatre.

Alderman Hidahl commented that “Daniel (Miera) mentioned a work session on January 22nd that I anticipate will establish policies and programs this council will be considering, also the ULI (Urban Land Institute) Report. Those two items are important to establish direction in 2019. But we don’t have to wait. In the ULI report, there is no silver bullet, but there is a silver shotgun blast. Nothing quite says that you aren’t open for business than a snowy sidewalk in front of your business. When cars come off the parkway and see half the streets with snowy sidewalks, they don’t consider that as a place to look for parking.”

Executive Director of the Business Improvement District (BID) Joe Behm applauded and said, “That’s exactly what I was going to say during public forum.”

Hidahl continued, “I would like Staff to consider policy that would establish details allowing the ordinance to clear walks six hours after a storm to be enforced. Not just to clear the walks, but to maintain it. We have winds that will cover a sidewalk just minutes after it’s cleared.”

Alderman Aiken commented, “We’ve (the Council) been through this a lot, and I’m still wondering why. They do need to be cleaned off – I agree.”

Manager Miera said that the Staff is working on a policy that has some teeth. “One of the difficult things is we can cite a property owner, and they can pay the fine or get it cleared, and they choose to pay the fine.”

Mayor Fey commented that it would be “difficult to tell a business owner that we have to outsource our snow removal; that doesn’t feel right to me.” Fey continued, “I think the City needs to get to the walks that are not being done.”

Alderman Hidahl responded, “I would not be in favor of City Staff doing this. They spend hours taking care of snow during the storm and they need some downtime. The City needs to demonstrate it is serious about the problem.”

Alderwoman Mitchell chimed in, “I agree with Jack that this is an issue; the walks need to be cleaned. Like the sidewalks by the Knights of Pythias building, they are treacherous. The businesses need to take ownership of their sidewalks.” Manager Miera asked if Council wanted a special meeting for this issue. Mayor Fey said, “I can do it tomorrow.” Manager Miera reminded him they need 72 hours to schedule a meeting for proper public noticing.

Alderman Aiken changed the direction of conversation to say, “I look forward to working with the new mayor and my two new council members.”

Mayor Fey replied, “I am excited, I feel blessed, and I want to put a thank you out to past leadership especially Kathy Heider. I am excited to see how many people are in this room.” He ended with, “If you come to this room and participate, that’s how you get things done.”

Executive Director of the BID Joe Behm stated, “I had discussions with the BID (on snow removal) and they are concerned; it isn’t just the three billionaire owners, there is also a tenant that didn’t clear their walks. Perhaps you should look at fines on tenants; the MJ shop didn’t do it either and they are capable. You should look at a graduated scale – $100, $250, $500 and stay at $500 for the rest of the season. I appreciate you bringing that up right away. And there is a dilemma of how you do it when you fine them. But we do have a guy, Chuck Webster, that can do it. He is already doing it for a few accounts.” Behm then changed the topic to say, “Welcome new members of Council. When I was lucky enough to wield the gavel, I learned that the louder you do it, the more you keep the old ones awake.”

Mayor Fey adjourned the regular meeting at 7:51 p.m. The next regular Council Meeting will be Tuesday, January 15, 2019.

END_OF_DOCUMENT_TOKEN_TO_BE_REPLACED

Benefitting the county, schools, and much more By Don Ireland   This year marks the 30th anniversary of casinos opening in the former little mining towns of Black Hawk, Central City and Cripple Creek, Colorado. In those early years, smoking was allowed inside ... END_OF_DOCUMENT_TOKEN_TO_BE_REPLACED