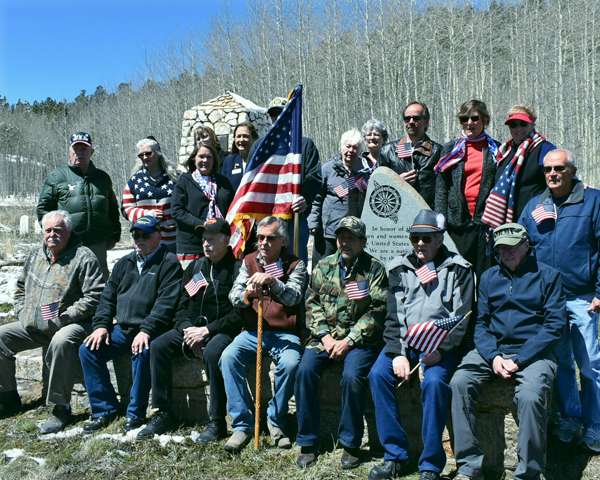 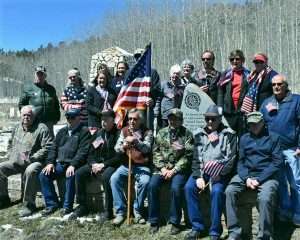 Established at Dory Hill Cemetery by DAR and Black Hawk

Unveiled this Memorial Day weekend, is a new Veteran’s Memorial at the entrance of Dory Hill Cemetery for Black Hawk, Colorado. The granite stone is a memorial to those known to have served our country, as well as those resting there who were either buried in unmarked graves or whose service was not recognized with their passing. Honor and appreciation for service to the USA is the purpose of Memorial Day. Black Hawk has made a clear statement that lives of service personal are very important.

Black Hawk City Mayor, David Spellman, spoke his appreciation of the service our veteran’s provided our community and nation as the stone was unveiled in Dory Hill Cemetery on Friday, May 24th at 11 a.m.

Fran McVeigh, Regent of Mountain Rendezvous Chapter of NSDAR in Evergreen, did much of the speaking. Jenn Latini, Chapter Chaplin, who served in Iraq, prayed between recognitions for the presentation of the memorial. On hand were a number of Daughters of the American Revolution (DAR) members; including our own locals Kate Lorenz, Kay Lorenz, and Kathleen Schrader along with our local VFW and community members.

How the memorial came to be

These two ladies, with encouragement and support from the DAR, realized there were many unmarked graves and the possibility that some known graves marked lives of those who had served in the military, but where not recognized. Veterans were found to have been considered ordinary citizens, although they had military records. There were graves for veterans of Sand Creek Massacre volunteers, World War I and II, and Korea. There were veterans from all branches of the service who had not been recognized, particularly in Dory Hill Cemetery.

Dory Hill Cemetery for Black Hawk has 16 known graves of veterans. The cemetery located north across from the Gilpin Justice Center just south of Hwy 46 on Dory Hill Road opened in 1860. There is at least one who soldier who survived the Civil War as a private, one from WWI, and one from the Korea War buried there. Most of the others mark the lives of those who served in WWII, or some branch of the service.

With unrecognized graves of veterans, and the importance of keeping the memory of these veterans in the community’s eyes today and in the future, Ms. Lorenz and Ms. Schrader began the idea of a plaque on the Dory Hill Cemetery. They began by asking the City of Black Hawk if a plaque could be put in the cemetery with cooperation from the DAR.

Developing the memorial that was unveiled, last Friday took a considerable investment of time. Motivated by the DAR purpose of “Commitment to Historic Preservation, Education and Patriotism in Our Communities,” this duet of determination patiently endured red tape and logistic hoops with processes and procedures of government. The contacts and interactions made in the process will linger in lives touched to remember the value of our veterans. From DAR 495 BC-429 BC: “What we leave behind is not engraved in stone monuments, but what is woven into the lives of others.”

The wording and the DAR insignia required approval by the National Daughters of American Revolution in Washington DC. This wording for a plaque was sanctioned in 2016.

Turning again to the City of Black Hawk, fall 2018 was the time they were given opportunity to progress with the plaque idea. A stone was commissioned for 2019 with Black Hawk’s generous support. The stone and engraving, placement erected at the entrance to the cemetery far exceeded DAR hopes of veteran’s recognition in Gilpin County. The date was set for the unveiling to be on Memorial Day Weekend, 2019.

Remembering can be a quick thought, or a saturating presence. Memorial Day, Decoration Day, or Remembrance Day began in the spring when flowers bloomed, by 1866. After four years of Civil War in the US where 620,000 soldiers from both sides sacrificed their lives, many communities stopped work for a day to give grateful honor to those fallen in battles. 154 years later we have many more conveniences, but still busy lives. The freedom and securities our first responders, law enforcement and military provide us is only possible because of the sacrificed serves for our communities and nation, United States of America. Stopping to remember is a sure way to appreciate the truth of what it took for us to be here now.

Remembrance Day and Decoration Day in the US was a day to go to the graves of fallen soldiers to decorate the graves and remember the individuals who left empty places in their homes, community and nation. Memorial Day became federally established as a national holiday in 1888. It was established to allow Civil War veterans a day to not lose pay for taking time to honor their fallen comrades. It became a legal day of rest and remembering.

Many organizations in our communities support our veterans, because what they have gone through to serve in battle makes permanent changes to each life. We can show our appreciation by decorating the graves of those who gave their all for us. Many cemeteries have flags set on the graves of veterans, whether they lost their life in battle, or survived to come home and tell others about their service. Many communities have a Memorial Day Service, and the Veterans of Foreign Wars in Morrison brought tears with the playing of taps accompanied by a drum roll.

The Mountain Rendezvous Chapter of the Daughters of the American Revolution (DAR) meets in Evergreen once a month. Members are genealogically verified descendants of American Patriots, who serve our communities with remembrances of veterans.

Those of us who have a friend or family member who has served our country, can easily take one day to stop and appreciate the sacrifices made for us. Being a parent is a sure way of realizing the sacrifices one can make for the wellness of another. War is never desired, but in times of need, being a parent of one who protects us from those who would try to take that freedom away, offers a rewarding peace of mind. 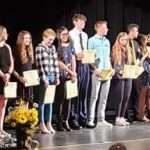 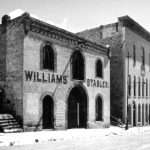 Miner Bob Fallon on a drunken spree
Leave a comment