New trucks all around in Central City 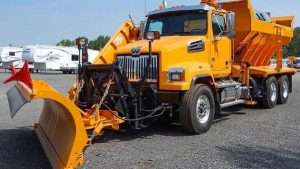 The Mayor called for a motion to approve the consent agenda which consisted of the minutes from the January 7 meeting and regular bill lists through January 9. Alderwoman Johnson moved to approve the Consent Agenda and was seconded by Alderman Laratta. The motion passed unanimously.

There was no old business on the agenda.

Director Hoover introduced Resolution 20-03 which would authorize the acquisition of a pickup truck for the Public Works Department. The anticipated purchase was included in the 2020 Budget. Public Works has added a staff member which precipitated the need for another vehicle. Staff has researched and found the best price for a 2020 Chevrolet Silverado at a cost of $33,963. The City would use cooperative pricing with CDOT as part of a volume purchase of fleet vehicles to obtain a lower than normal cost.

Alderwoman Laratta moved to approve Resolution 20-03 and was seconded by Alderman Aiken. The Resolution passed unanimously.

Director Hoover introduced Resolution 20-04 which would authorize the acquisition of a new Parkway Plow Truck for the Public Works Department. This plow truck would replace a 2004 truck which will be consequently sold at auction. The cost of the plow truck will be $243,971 which is less than the purchase price of $250,000 included in the 2020 Budget. This vehicle is also part of the cooperative purchasing plan with CDOT.

Fire Chief Gary Allen introduced Resolution 20-05 which would award the bid for design and manufacture of a new Type III Combination Fire Engine to vendor Front Range Fire Apparatus, LTD. The new fire engine could respond both to fires within the City and wildland fires. The Type 3 Engines traditionally have four-wheel drive to make driving over rough terrain easier, and carry a minimum of 500 gallons of water. This truck would be the only one in the fleet with a ladder which is required by the Mutual Aid Agreement with Black Hawk. Once acquired, the City will sell a 1972 truck at auction. The City was awarded a federal grant for the purchase in the amount of $430,000 which requires the City to contribute at least $20,477 to the cost. The total amount of the acquisition would be $474,390 making the City’s cost $64,867.

Alderman Hidahl commented that there has been a big improvement in the City financials in the last few years allowing for approval of three vehicles (Public Works plus the Fire Engine).

Alderman Aiken moved to approve Resolution 20-05 and was seconded by Alderwoman Johnson. The Resolution passed unanimously.

Code Enforcement Officer Lindsey Flewelling introduced Resolution 20-06 which would adopt an amended Comprehensive Fee Schedule. The changes in the Resolution removes fines and fees for municipal courts to their own fee schedule and revises fees related to licensing, permitting, and fees charged by the Gilpin Sheriff’s Office. Per Flewelling, “Almost all of the fees are designed to recover actual costs.”

Alderman Hidahl asked if the Parkway Access Fee of $1,500 is adequate for potential development. City Manager Miera responded that the fee only covers the application and referred to the part of the Code that requires applicants to pay for all costs.

Alderwoman Laratta moved to approve Resolution 20-06 and was seconded by Alderman Aiken. The Resolution passed unanimously.

Code Enforcement Officer Flewelling introduced Resolution 20-07 which would adopt an amended Municipal Court Fine and Fee Schedule. This change is a result of the Ordinance passed in December 2019 matching Municipal Fees with the State’s recommendation. The fees are not expected to be revenue generating, but to cover actual costs.

Alderman Aiken moved to approve Resolution 20-07 and was seconded by Alderwoman Laratta. The Resolution passed unanimously.

Alderman Aiken commended Fire Chief Gary Allen for acquiring a grant to offset the cost of a new fire truck. Aiken also thanked Lindsey Flewelling for working with the new owner of the Knights of Pythias building.

Mayor Fey encouraged the community to come to the next Council Meeting on January 28 for the work session regarding goal setting.

Mayor Fey opened the floor to the public for anyone who wished to speak to the council on any items not on the agenda. Barbara Thielemann spoke to Council informing them the Main Street Commission has two new vacancies to fill.

Mayor Fey adjourned the regular meeting at 8:07 pm. The next regular Council Meeting will be Tuesday, February 4, 2020.

END_OF_DOCUMENT_TOKEN_TO_BE_REPLACED

Benefitting the county, schools, and much more By Don Ireland   This year marks the 30th anniversary of casinos opening in the former little mining towns of Black Hawk, Central City and Cripple Creek, Colorado. In those early years, smoking was allowed inside ... END_OF_DOCUMENT_TOKEN_TO_BE_REPLACED

Where the dead get to tell their story By Jaclyn Schrock On Saturday, August 21, the Gilpin Historical Society held their annual Cemetery Crawl. Tickets allowed the shuttle of hundreds of guests from the Teller House parking lot to the Cemetery. Depending on v... END_OF_DOCUMENT_TOKEN_TO_BE_REPLACED