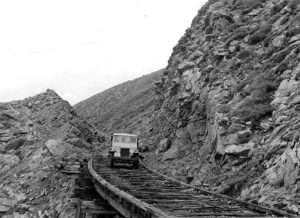 Between east and west portals of Moffat Tunnel

Tisn’t strictly in suburbia, but Willie has a tip here that’s bound to be of interest to lots of Sunday afternoon mountain drivers. Warren Kunkle, driver for the Denver Tramway Corp., reports that the new road over Corona Pass (Editor: also known as Rollins Pass over to Winter Park) between east and west portals of the Moffat Tunnel now can be traveled by auto.

Kunkle drove his passenger car over the hill from east to west a few days ago, and outside of a bit of delay for construction equipment, some soft spots, and lack of guard rails on the high trestles, he reported traveling wasn’t too difficult.

“It’s no place for the timid soul yet,” Kunkle said. “And don’t try it during a rainstorm, but a good driver with a good car can make it.”

The road’s being re-built along the old Moffat Railroad grade by Boulder and Gilpin counties, the State Fish and Game Department, and the U.S. Forest Service.