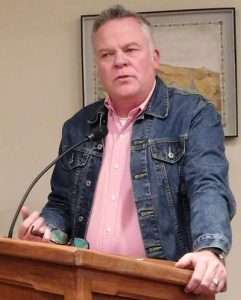 The Mayor called for a motion to approve the consent agenda which consisted of the minutes from the November 20 meeting and the regular bill lists through November 28. Alderwoman Voorhies moved to approve the Consent Agenda and was seconded by Alderwoman Laratta. The motion passed unanimously.

No Tax Too Much For the Weary

Attorney McAskin reviewed the second reading of Ordinance 18-13 which would amend the City Code to increase the Sales and use Tax pursuant to voter approval granted on November 6. The tax collected would be earmarked for use on emergency responder items only with special emphasis on the Central City Fire Department.

Mayor Heider opened the public forum for Ordinance 18-13, but no one chose to speak on the topic.

Alderwoman Voorhies moved to approve Ordinance 18-13 and was seconded by Alderman Aiken. The Ordinance passed unanimously.

Sing It Loud Sing It Strong

Scott Finlay, Director of Development, presented the annual report for the Central City Opera to the Council. All non-profits supported by the City are required to report on the achievements and fitness of their organization at least once per year to the Council. Finley thanked the City for their continued support and partnership with the Opera. There were about 12,000 audience members attending this year; and the Opera partnered with the City for a Plein Arts Festival, the Jazz Festival, and a musical theatre. “We love the magic that’s here and think it’s something everyone should experience,” said Finlay. The Opera is also working with a design team to remodel one of the historic houses owned by the organization. The hope is it will become a “model home” and the architecture firm will be inspired to continue to restore homes owned by the Opera. Finlay concluded by calling out one person, “One of the greatest things we did this year is welcome Eric Chinn as our properties manager.”

Power to the Government

Attorney McAskin introduced the first reading of Ordinance 18-14 which would amend the Home Rule Charter pursuant to voter approval granted on November 6, 2018. The Ordinance codifies what was approved by voters on November 6 regarding filling vacancies on City Council. The Council now has the power to either call a special election or appoint an individual to fill the balance of the term at any point during the term. This measure was officially encouraged to be denied by the Council prior to the election and ended up passing by a vote of 150 to 77 (unofficial final results). Alderman Aiken commented, “I think the voters have spoken.”

Alderwoman Voorhies moved to approve the first reading of Ordinance 18-14 and set the second hearing and public forum for Tuesday, December 18, and was seconded by Alderman Aiken. The motion passed unanimously.

Mayor Heider corrected a press release regarding the recent election. The release, published concurrently in the Weekly Register-Call and the Mountain-Ear, reported that “voters elected Jeremy Fey to unseat incumbent (sic) Kathy Heider” and that “incumbent Judy Laratta was unseated by Jackie Mitchell.” Laratta and Mitchell were both running unopposed and will both be on the Council in 2019.

Mayor Heider went on to remind people that there will be a party for Shirley Voorhies on Saturday, December 8, at the Elks Lodge from 5-8 p.m. celebrating 22 years on council, planning commission, and the historic preservation commission. Heider stated that William Russell, Jr. has the longest record of civic service for the City, but Shirley mostly likely “is number two.”

Alderwoman Voorhies thanked the entire community for the support of the Tommyknocker event, “It was a huge success!”

Alderwoman Laratta reported that “Main Street looks really festive; I love the old fashioned candy canes.” She also said that Main Street Central City is having a light contest and “I noticed it looks like there will be a bunch of them that will enter; it looks like our community will light up like a Christmas tree – I love it!”

Mayor Heider opened the floor to the public for anyone who wished to speak to the council on any items not on the agenda. Two people chose to speak.

Barbara Thielemann, Main Street Central City Coordinator and organizer and founder of the Tommyknocker Holidays event reported, “We are already making new plans for the 22nd annual Tommyknocker event. We thank all our volunteers that made this year a great year. There were over 220 hand-made ornaments put on the tree by the Central City children. We estimated close to 200 people attended the community pot luck.”

Council candidate Jack Hidahl spoke to Council saying, “I’d like to commend the council and the BID (Business Improvement District) for putting together the funding and ability to put on the ULI TAP (Urban Land Institute Technical Advisory Panel), but your output is only as good as your input.” Hidahl reflected on what Central City was like in 1992 and the resources it did not have that it does today. He produced a half-inch thick document of Resolution 17-92 which provided the review of proposals and further studies of limited stakes gaming while identifying the impacts at various levels of development. The Resolution reports how many devices the City planned for and how many they actually got, leading to an overcrowding and control problem in conjunction with the ability to provide water services to projected increases, which was the basis for creating a moratorium on casino growth. The streamflow in 1992 allowed for less than 200,000 gallons of water to be pulled during the months of December 1992 through February 1993, but the projected requirements based on casino growth (applications for additional devices and expansion) would require raw water usage of more than 300,000 for each of those months. Hidahl stated that they (the 1992 Council) felt it was better to put a halt to growth than to run out of water for the businesses and residents. “The moratorium was not anti-growth, it was need. Central City is not anti-growth, it is anti-irresponsible growth,” said Hidahl.

The Council moved to enter Executive Session to discuss personnel matters for which the employee has consented at 7:40 p.m. The next regular Council Meeting will be Tuesday, December 18, 2018.