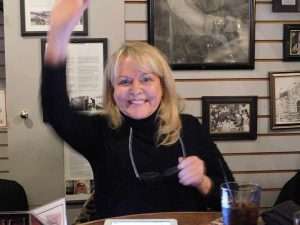 While Gilpin County relaxed in the relative quiet of fresh falling snow, Central City finalized an election for a vacant Council seat. In a domino falling fashion, Mayor Ron Engels was elected as County Commissioner last November; and then Mayor Pro-tempore Kathy Heider was internally elected Mayor for Central City vacating her Council seat. Four well-qualified folks stepped up to run for that seat (in no particular order): Bobbie Hill, Barbara Thielemann, Mary Bell, and Nick Ehlenbach. Each participated in a public forum and represented themselves well. After a hard fight, the results came in. Congratulations to Mary Bell, the new junior alderwoman of Central City! Mary Bell owns and operates Mountain Goat Gallery on Main Street in Central City. She has been an energetic addition to the City since she moved here a few years back. She recently purchased the Knights of Pythias building and is working on renovating it for future use. Her vision is for the building to be an arts center featuring a small gallery, a studio, and room for classes.

There was a separate ballot measure giving the City the authority to pursue high-speed internet connections either by themselves or in conjunction with a non-municipal organization or individual. Votes for – 162; and votes against – 13.

END_OF_DOCUMENT_TOKEN_TO_BE_REPLACED

Where the dead get to tell their story By Jaclyn Schrock On Saturday, August 21, the Gilpin Historical Society held their annual Cemetery Crawl. Tickets allowed the shuttle of hundreds of guests from the Teller House parking lot to the Cemetery. Depending on v... END_OF_DOCUMENT_TOKEN_TO_BE_REPLACED