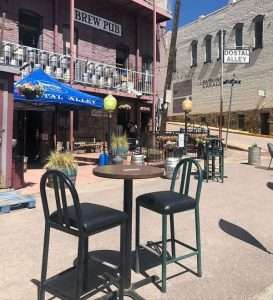 Central City is currently conducting their meetings via Zoom, although council and staff were present in the Council Chamber. Not all members in the chamber use microphones to the best of their ability and some comments are lost to the public. Notes on this meeting reflect only what can be comprehended from a public perspective.

Council met with Staff for a work session prior to the regular meeting. Mayor Jeremy Fey and Alderwoman Jackie Johnson were not present in Council Chambers for the work session, although Ms. Johnson was on the phone. The topic of discussion was a development opportunities brochure. Staff has been working on developing a brochure targeting potential business owners encouraging them to consider Central City for their business. Council made several comments for alterations to the brochure, and what they liked about the brochure. The brochure design is still in draft mode and not ready to be released.

Mayor pro-Tempore Laratta led the Pledge of Allegiance and then asked for any amendments or additions to the evening’s agenda. There were no changes to the agenda.

Mayor pro-Tempore Laratta asked if there were any conflicts of interest for any member of the council. There were no conflicts expressed.

The Mayor pro-Tempore called for a motion to approve the consent agenda which consisted of the minutes from the July 7 meeting, regular bill lists through July 7, and the ratification of HPC approval for an AT&T cell tower. Alderman Aiken requested the cell tower be considered separately and removed from the consent agenda. The tower is designed to mimic an historic mining structure. Alderman Hidahl moved to remove the tower item from the agenda and was seconded by Alderman Aiken. After much discussion about whether the rules allow them to discuss the item prior to a vote (Alderman Hidahl argued that Robert’s Rules of Order allow this and Attorney McAskin commented they are not following Robert’s Rules) on the motion, a vote was taken and the motion to remove the item passed unanimously.

Alderman Aiken moved to approve the consent agenda as amended and was seconded by Alderwoman Johnson. The motion passed unanimously.

Alderman Hidahl expressed concern regarding the proposed AT&T cell tower’s location (near the Coeur d’Alene mine) and that it does not belong as a backdrop in the City. Additionally, as a “stealth” tower, the design only invites curiosity about “what is that building”? The tower on stilts “will look ridiculous,” and “We would be well served to find a different location.”

Alderman Aiken commented that the current view of the Coeur d’Alene coming down from the Central City Parkway is a “fantastic view” and he does not want to be looking out from his porch and “seeing an ugly tower.” Aiken said he would like to see them consider a location further up the hill.

Alderman Hidahl moved to move the ratification to the next City Council meeting on August 4, 2020 and was seconded by Alderman Aiken. The motion passed unanimously. (This vote was taken as Mayor Fey arrived and Mayor Fey abstained from the vote.)

Mayor Fey opened the floor to the public for anyone who wished to speak to a topic on that night’s agenda.

Joe Behm, director of the Business Improvement District, commented that he supports the Ordinance 20-10 on behalf of the District to include any new commercially developed land in the BID.

The second reading and public forum for two Ordinances were considered under old business.

Mayor Fey opened the public forum, but no one chose to address council.

Alderwoman Laratta moved to approve Ordinance 20-09 and was seconded by Alderman Aiken. The Ordinance passed unanimously.

Attorney McAskin reviewed Ordinance 20-10 which would amend the Municipal Code and Land Development Code. This would require any potential property owner obtaining land zoned as commercial to also be included in the Business Improvement District.

Mayor Fey opened the public forum, but no one chose to address council.

Alderwoman Laratta moved to approve Ordinance 20-10 and was seconded by Alderwoman Johnson. The Ordinance passed unanimously.

The Council considered approval on one Resolution.

Manager Miera introduced Resolution 20-25 which would extend the City’s Emergency Disaster Declaration through Wednesday, August 5 allowing the city access to additional federal and state resources during the pandemic.

Alderwoman Laratta commented that the lot next to her is overgrown and has a lot of thistles. She called it “a rat trap.” She also commented that the City has done a great job of making us looking open even when we were not. “Thank you, Sam, (Director Hoover), it was good.”

Alderman Aiken commented “I think it’s pretty neat what the Opera is doing,” referring to the one-hour recitals from the balcony that have occurred during the summer.

Alderwoman Johnson commented that there are people swimming in Chase Reservoir and questioned whether that was allowed. Manager Miera responded that swimming is not permitted by people or animals (pets). Director Jack Beard responded that they are aware of the situation and are taking measures to encourage the public not to swim.

Alderman Aiken extended his condolences to Mayor Fey on the loss of his aunt.

David Josselyn, reporter for the Weekly-Register Call addressed the Council. Josselyn clarified that on May 16, 2017, the Council officially adopted Rosenberg’s Rules of Procedure and there are similarities to Robert’s Rules of Order including a discussion period after a motion. He also commented on noxious weeds (referred to by Alderwoman Laratta) and that the CSU Extension office has good resources. Finally, he commented that this Saturday, July 25, at 6 pm is the final performance of Abduction at Mountain City, a socially distanced melodrama, and encouraged them to attend if they were comfortable in that setting.

Council moved to enter Executive Session to discuss legal questions related to limitations on the City’s taxing authority at 8:43 pm. The next regular Council Meeting will be Tuesday, August 4, 2020.

END_OF_DOCUMENT_TOKEN_TO_BE_REPLACED

Benefitting the county, schools, and much more By Don Ireland   This year marks the 30th anniversary of casinos opening in the former little mining towns of Black Hawk, Central City and Cripple Creek, Colorado. In those early years, smoking was allowed inside ... END_OF_DOCUMENT_TOKEN_TO_BE_REPLACED

Benefitting the county, schools, and much more By Don Ireland   This year marks the 30th anniversary of casinos opening in the former little mining towns of Black Hawk, Central City and Cripple Creek, Colorado. In those early years, smoking was allowed inside ... END_OF_DOCUMENT_TOKEN_TO_BE_REPLACED