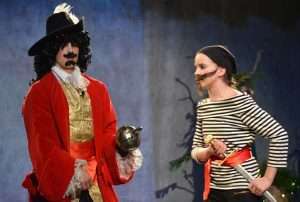 “Second star to the right, and straight on till morning.”

Eager crowds sprinkled on their pixie dust and took off for a great adventure with the Gilpin County Players, who presented the beloved tale of Peter Pan and Wendy at the Gilpin school auditorium in three performances on April 9, 10, and 11.

Peter Pan, originally written by dramatist J.M. Barrie in 1911, is the story of a magical boy who refuses to grow up because he wants always to stay young and have fun. He lives on the magical island of Neverland with his band of followers, the Lost Boys. The play details his adventures with the Darling family, Wendy and her brothers Michael and John. Indians, pirates, and mermaids round out the fantasy, while the mischievous fairy Tinkerbell creates havoc at every opportunity.

On the island, Wendy becomes the “mother” the Lost Boys are longing for. She calls Peter the father of the group, and he is willing to play along, but only if it is all make believe.

Captain Hook, leader of the pirates, wants revenge against Peter because in an earlier sword fight, Peter cut off Hook’s hand and fed it to a crocodile.

Throughout the play, the themes of growing up and the importance of a mother’s love are emphasized.

Bailey Hanssen portrayed Peter Pan with spirit and dedication, even getting a boy’s haircut to make her look the part. Nina Halsted’s Wendy was a loving mother and loyal friend, and the Lost Boys added a humorous ingredient. The fight scenes between Peter and Captain Hook (Jake Duncan) had the audience on the edge of their seats, and the battle between the pirate Smee (Carly Johnson) and the snapping crocodile (Courtney Holmes) had the kids roaring with laughter. Violinist Isabel Szucs drew her bow sharply across the strings during interludes as the naughty Tinkerbell.

Director Hannah Raynes’ goal is to keep growing the drama program at the school. “The arts are so important, and I often feel they do not get the attention they deserve,” she said. “This year, I wanted to put together a production to show the Gilpin community what this school is capable of.”

Raynes hopes to get younger children excited about theatre so they will continue with the program in secondary school. With this object in mind, more than three dozen elementary-age dancers performed as mermaids, fairies, Lost Boys, and pirates.

The play was preceded by the annual spaghetti dinner to benefit the Montessori program. $916 was raised in sales and donations, plus an additional $446 for the silent action. Parents hope to expand the Montessori to include a sixth grade, and the funds raised will be used for materials to get a class ready for 2016-17.

Kris Icenogle noted that the amount raised was almost $200 more than last year. She reported, “This was our best year!” Nearly 80 were served at the dinner.

END_OF_DOCUMENT_TOKEN_TO_BE_REPLACED

Where the dead get to tell their story By Jaclyn Schrock On Saturday, August 21, the Gilpin Historical Society held their annual Cemetery Crawl. Tickets allowed the shuttle of hundreds of guests from the Teller House parking lot to the Cemetery. Depending on v... END_OF_DOCUMENT_TOKEN_TO_BE_REPLACED