Nevadaville saloons in the 1880’s 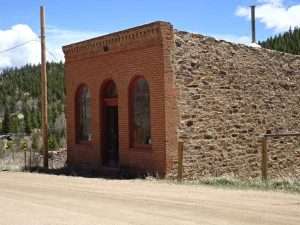 Drinking and Shooting at Nevadaville

Rocky Mountain News, July 19, 1884: “Quite a rumpus was kicked up at Nevadaville, the seat of most of the troubles in Gilpin County, early Thursday morning. Barely after midnight, George Ellis and Burke, who had been drinking in Mathews’ Saloon, appeared on the sidewalk in front of the saloon. Suddenly, and without apparent cause or warning, Burke hit Ellis in the head with a slung shot (striking weapon) knocking him to the ground, senseless. Burke made his escape for the time being by running away. The marshal was notified and afterwards arrested Burke at Black Hawk, from whence he intended to take the train. He was lodged in jail to await a preliminary examination, which will not occur until next Wednesday owing to the condition of Ellis, which landed (Burke) in jail. Ellis was struck over the head and it is believed some bones were broken, and his wound may prove serious. Burke is a hard character. He shot Bob Fallon in the leg a short time ago and escaped punishment by the disappearance of the witnesses.

About two hours afterward another fracas occurred about the same place as the above. Jack Labaree, another hard character, came up the street near Mathew’s Saloon and got in a quarrel with Henry Granville, whom he accused of stealing his horse, which was missing. An altercation ensued and the two finally grappled. While they were wrestling with each other, Richard Granville, a nephew of Harry Granville, came out of the house and attempted to interfere with the fight, but was pushed back by spectators. He then returned into the house and came out with a shotgun and fired two shots in the direction of the two antagonists, evidently meaning the shots for Labaree and not for his uncle, Harry Granville. Labaree received several buckshot, one in the leg, quite a bad wound, and three in the left arm and shoulder and one or two in the fingers. Harry Granville, the uncle also received one shot in the leg, not a bad wound, and the marshal received one through his pants leg. Richard Granville was arrested and put under $500 bonds to appear before the justice next Wednesday.”

Problems occurred from drinking, and saloons were gathering places for the consumption of alcohol. However, saloons were important to Nevadaville, because they were gathering places, where business and politics could be discussed. Also, saloons were the economic driver of the town.  A saloon owner paid an annual saloon license fee of $500 that was payable semi-annually. The number of saloons would increase in the more profitable mining years, and then decrease in recessionary environments. The saloons closed at midnight every day except Sunday, when closing time was 6 p.m. The saloons could also be tippling houses. Tippling houses sold liquor, wine, and beer for consumption off-site, in a similar manner as a liquor store. There was a malt beverage, or beer only, saloon on the south side of Main Street. It was known as Hall’s Place, and it was a billiards hall that was popular with the younger adult males. The annual license fee for a malt beverage only establishment was $250. The amount was half of the regular saloon license fee.

Regulations increased over time. In addition to paying the license fee, the saloon owner would have to put up a $2,000 bond. The conditions of the bond included that the saloon owner keeps an orderly place of business, and abides by governing liquor laws. The saloon owner would have to abide by the laws of the State of Colorado, and the laws and ordinances of the Town of Nevadaville. Also included in the saloon owner’s area of responsibility was the sidewalk in front of the saloon. It was the saloon owner’s responsibility to keep the sidewalk (boardwalk) clear and free of nuisances. It was up to the saloon owner to make sure girls weren’t hanging around in front of the saloon. Nevadaville had a commission of three elected officials to oversee saloons and tippling houses. In 1898, the town adopted an ordinance against gambling, specifically against running a Keno table, Faro bank, and against Bagatelle playing cards. The fine would be not less than $50 or more than $100.

Louis Carter describes Victorian era saloons in his book Yesterday Was Another Day, “The saloons had one general format. Curtained front windows, swinging doors set back six to eight feet from the front entrance, a bar running lengthwise of the main room, one or two wine rooms adjacent to the rear entrance, and from two to six card tables. The bars were very ornate and consisted of a front and back bar, the back bar generally being a large plate glass mirror. There were two rails at most of the bars – one on the outer edge of the bar and one at the foot of the bar. There were no stools at the bar as none were needed. I know of no more relaxing and comfortable position then of having one foot on the foot-rail and one elbow on the bar-rail.”

According to A Concise Social and Business Review of Three Principal Towns in Gilpin County, written in 1905, here are the descriptions of the saloons in Nevadaville.

The resort conducted by Joseph Kramer, located on Main Street is one of the best in the city. The bar is in light wood and is backed with a handsome mirror and a stock of the best wines and liquors on the market. A pool table is part of the fixtures of the room. Mr. Kramer started in business in 1890. He was born in Germany in 1841, and came to this country in 1864, and to Colorado in 1868, where he has remained. He enjoys quite a large trade.

The refreshment resort owned by Thomas H. Lawry is one of the finest in the city. It is located on Main Street and is nicely furnished. An elegant bar with fine mirrors can be seen and a pool table, together with card tables, are placed around the room. This place enjoys a good trade. Mr. Lawry was born in England in 1846 and came to America in 1873. He went to California in 1875 and returned to this place in 1876, where he has since resided. He has been in business the last eighteen years and moved to his present location in 1890.

This place is located on Main Street and is owned and managed by M. Steadman. The room is handsomely furnished and the bar is well stocked with the best of wines and liquors. They also carry an excellent line of cigars. This business was established 12 years ago. Mr. Steadman was born in Ireland in 1850 and came to this country in 1871 and to this city in 1876.

This well-known resort is owned by Thomas Chapple, one of the old-timers in this section. The room, located on Main Street, is neatly furnished and a fine line of liquors and cigars are always on hand. Mr. Chapple has been in business for the last twenty two years and he enjoys the respect of all who know him. He moved to his present location fourteen years ago.

Of all the saloons in the city none enjoy a larger trade than the Gold Coin, located on Main Street and owned by John Maddern. This place is one of the most popular in the city, and this is due greatly to the general character of the proprietor. Mr. Maddern is a thorough businessman and keeps for sale the best goods on the market in wines, liquors and cigars. He is a member of the Town Council of Nevadaville.

Of the old saloons, only two remain – the Bon Ton and the Kramer Saloon. They were constructed in approximately 1887. They are similar in construction with walls of stone and cement and brick façades. The front of the saloons feature three large door and window arches. The top of the buildings have Queen Anne style brickwork. These two Nevadaville saloons were the only two stand-alone brick and stone constructed saloon buildings, and the only Nevadaville saloon buildings in existence today.

END_OF_DOCUMENT_TOKEN_TO_BE_REPLACED

Benefitting the county, schools, and much more By Don Ireland   This year marks the 30th anniversary of casinos opening in the former little mining towns of Black Hawk, Central City and Cripple Creek, Colorado. In those early years, smoking was allowed inside ... END_OF_DOCUMENT_TOKEN_TO_BE_REPLACED