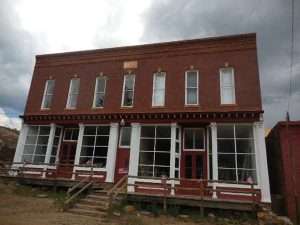 This is a new fact-based series based on newspaper articles, and a little fiction, to depict life in Nevadaville during its economic peak.  The fire department came about after devastating fires like the one depicted below:

The most disastrous conflagration that has occurred in these mountains since the Central City fire in 1870 (sic) was the burning of the business part of Nevadaville early yesterday morning. The fire occurred about half-past one o’clock when almost everybody was asleep, and started in that portion of the business centre composed of frame buildings, so that the furious flames, once outside of the room in which they started, had but little opposition to sweeping over and devouring a good portion of the city, and yesterday the heart of the city presented a large square of black and smoking debris the ruins of five business houses. The total loss is variously estimated from $15,000 to $20,000. The loss will not fall below $15,000 and may possibly reach $20,000, for at this time it is hard to tell the amount lost by damaged and stolen goods. Many of the rooms were cleared of their contents before the fire reached them, and being piled out upon the streets and hills an excellent opportunity was offered for thieving, and it is loudly asserted that many goods were carried off while those left in the streets were more or less damaged. The fire originated in the Good Templars Hall (adjoining the Odd Fellows block) where during the early part of the evening, there was a meeting of committees from the Good Templars, Red Men and Forresters lodges. The members claim that when they left they put out the lamps and fire in the stove. However, about half past one o’clock Dan Driscan, while getting home from work, saw the fire and smoke in the hall. Giving the alarm of fire and securing the assistance of two or three others, he broke in the door of the hall, but was met with such a cloud of smoke and flame that subduing the fire was out of the question. Nevadaville has no fire alarm and no fire department, but by crying fire and blowing the mill whistle the people were alarmed and soon nearly everyone in town was out upon the street, and the work of saving goods and property was commenced. As a general rule the men turned in to save what they could, but there were some—and they were not few—who stood around and refused to lend any aid. Those merited and received the condemnation of many.

Word was carried down to Central that Nevadaville was on fire, and the alarm being sounded here the Hook and Ladder Company turned out, and about half past two the Hooks and a large number of Central citizens were on the ground. By this time the fire had full sway, and was rapidly making its way to the West. On the East was the Odd Fellows block, which being of brick and iron shutters covering the windows, was part proof against the fire. On the West were five frame buildings and these proved to be victims of the flames. It was apparently useless to try to save these buildings, and the fire was only checked and finally stopped by pulling down the fifth framed building which adjoined the Masonic brick block. In this work the Central firemen and citizens rendered effectual service, and it may be saved, saved the balance of the town from destruction. While the fire was going on in the first two buildings, household goods and merchandise were removed from the other three buildings in imminent danger, and also from buildings across the street and from the Odd Fellows and Masonic blocks.

The frame buildings directly opposite the scene of the raging fire were only saved by close attention and hot work in throwing on water buckets full and wet blankets, carpets etc., and even then the buildings and contents were much damaged.

The following buildings were totally destroyed:

Good Templar’s block, a two-story frame, occupied on the first floor by the Post Office and Clark & Hawkins, butchers.

The principal losses were as follows, most of them estimated:

–The postmaster’s loss will be covered by $200. He saved the mails.

–Harry Rachafsky, dry goods and clothing damaged and missing to the amount of $1,500.

It is reported that the Odd Fellows lost nearly $500 worth of furniture and regalia by moving from the hall.  The damage to buildings on the opposite side of the street will foot up fully $1,000, while the damage to furniture and stock will amount to another thousand dollars if not more. The parties mostly injured on this side are Henry Greenfield, saloon; Frank Rowley, barber; Fred Newmeyer, residence; Mrs. Malone, owner of town hall; Henry Matthews, saloon, and Tom Chapple, saloon.