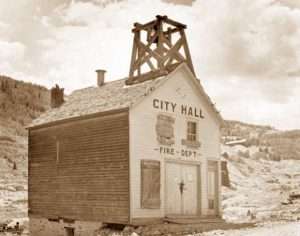 One of the original pioneers of Nevadaville, and town business leader, was Truman Whitcomb. He purchased property on the southwest side of Main Street in 1870, and built a stamp mill known as the Whitcomb Mill Company. Sometime before his death in 1883, Mr. Whitcomb built a frame two-story building on a lot, just east of his mill. Whether or not this building was used as a house, is unknown, but highly probable. Late in 1883, the estate of Truman Whitcomb sold the lot and frame building to the Town of Nevadaville for $150. The frame building would become the Nevadaville Town Hall.

In 1890, the town leaders decided it was time that Nevadaville should have a volunteer fire department, after suffering from catastrophic fires. The fire department would be similar to fire departments in the neighboring towns of Idaho Springs and Central City. Nevadaville had experienced an increase in population and prosperity. Towns were evolving. Citizens and businesses wanted fire protection services. The Nevadaville town treasurer and finance committee member, C. E. Stevens was sent by the town leaders to visit fire departments in Chicago and Cincinnati. The purpose was to gain knowledge of the best chemical fire “engines” available and firefighting equipment.

Per Mr. Stevens recommendation, the town leaders decided to purchase a Champion Engine from the Fire Extinguisher Manufacturing Company of Chicago. From approximately1865 to 1920, the chemical fire engine was an important firefighting apparatus in fire departments. It used soda and acid for pressure and as an extinguishing agent. The chemical engine would require cleaning of the soda-acid solution from the copper and the polishing of brass as part of its maintenance.

The town leaders also purchased a Bangor ladder truck from the Bangor Extension Ladder Company of Bangor, Maine. This was a popular fire apparatus, because it improved the existing pole ladder by attaching the poles. It took months for this firefighting apparatus to show up in Nevadaville. These two trucks were pulled by the volunteer firemen to fight fires in town. Ladders, hooks, and pails were ordered.

Applications for the volunteer firemen were taken, with a limit of 30. The applications were read at the regular Town Hall meetings. Then they were held over for one month. Any objections were voiced at the next month’s meeting, before the vote. Once selected, the firemen received a uniform to use while on duty. The firemen had their annual poll tax of $2 waived. They were considered peace officers and could deputize men as needed to help with firefighting. The volunteer firemen formed a running team, and raced in competition with neighboring firefighter teams.

The street level of the Town Hall had been used as a store room. The room was leased to J.H. Grenfell for his candy and confectionary business. Mr. Grenfell was asked to leave, and he moved his confectionary store to another Main Street location.

John Rowling was hired to turn the street level of the Town Hall building into a fire house. He installed the large doors on the front of the building and the ramp, by which the fire truck would come and go. It is probable that the chemical engine was the only fire truck inside the fire department. The hook and ladder truck may of been parked out back. Finally, a fire alarm bell was sought and a 650 pound Blymyer bell was ordered. Mr. Rowling was instructed to mount the bell on the front of the town building.  The Blymyer bell would be similar, if not the same, as the bell at Washington Hall, which was home to Central City’s fire department.

In his book, The History and Laws of Nevadaville, Colorado historian Nolie Mumey reprinted the Ordinance Relating to Fire Department. This ordinance was approved in 1894. Membership was raised from 30 to 40 volunteer firemen. The Fire Chief was elected by the Mayor and the Board of Trustees.

Central City historian Louis J. Carter, in his book, Yesterday was Another Day recollects about Nevadaville’s fire department, “The town had a very active and efficient fire department which included a fire house and equipment that met the needs of the town and which was up to date at its time. One must know that there was no water supply with fire hydrants with which to fight a fire. Chemicals were used for the most part, but many a fire was put out with axes, shovels, and sand. The people of Nevadaville were very fire conscious and every precaution was taken to prevent fires. They knew that once a fire had a good start it meant the destruction of that house.”

END_OF_DOCUMENT_TOKEN_TO_BE_REPLACED

Where the dead get to tell their story By Jaclyn Schrock On Saturday, August 21, the Gilpin Historical Society held their annual Cemetery Crawl. Tickets allowed the shuttle of hundreds of guests from the Teller House parking lot to the Cemetery. Depending on v... END_OF_DOCUMENT_TOKEN_TO_BE_REPLACED

Benefitting the county, schools, and much more By Don Ireland   This year marks the 30th anniversary of casinos opening in the former little mining towns of Black Hawk, Central City and Cripple Creek, Colorado. In those early years, smoking was allowed inside ... END_OF_DOCUMENT_TOKEN_TO_BE_REPLACED