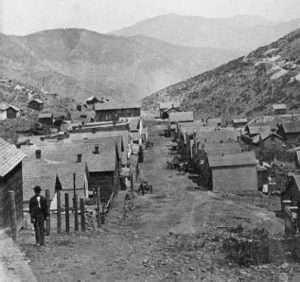 Nevadaville was originally named Nevada City. Nevada City was founded by A.D. Gambell and Sam Link, who formed a townsite company, only three weeks after John Gregory’s gold discovery in 1859. The Nevada Mining District was created with local laws of its own making, due to its location outside of state or territory jurisdiction. At a meeting held on Saturday, April 28, 1860, the following resolution was passed by the Miners’ Court:

“ …Resolved there shall be no Bawdy Houses (brothels) Grog shops (low class barrooms) or Gambling Saloons within the Limits of this District and any persons or Company of persons bringing or keeping such nuisances within the limits of this District Shall lay himself liable to a fine of $50.00 and be warned to discontinue the Same and if the nuisances is not abated the party or parties so violating this regulation Shall be fined $50.00 and given five days wherein to leave the District and it shall be the duty of the Sheriff of this District to See this law is enforced and one half of the fine for Such offence Shall be given to the Sheriff while the remaining half Shall be Deposited with the president Subject to the order of the Miners in Mass meeting,”

“Nevadaville (then called Nevada) was the most westerly of the little towns—and the noisiest. Thirteen saloons fronted on its block-long Main Street and they were usually raucous with swearing and bragging. Men stumbled out of one cabin or frame building and crossed the frozen mud street with uncertain steps. But they made a hearty attempt to swagger when they shoved open the door of the next saloon,” writes Caroline Bancroft in her book Gulch of Gold. This excerpt is from the night of March 29, 1861. It sets the scene for the story and legend of Pat Casey.

Was Nevadaville a troublesome mining district as described by Caroline Bancroft? Or more like, “The social trend in Nevadaville was toward such fraternal organizations as Masons, Odd Fellows, Red Men, Foresters, Independent Order of Good Templars, and a Temperance Society” per Nolie Mumey, in his book History and Laws of Nevadaville? Both troublesome and polite behaviors existed in varying degrees, though the troublesome behavior was what often captured the newspaper headlines. As Nevadaville matured from a mining camp to an incorporated city, the Victorian era society was polite, orderly, and socially engaged.

The first of many fires would occur on November 4, 1861. The town would rebuild as long as it was viable, until the early 20th century. “Nevada was almost destroyed by fire – fifty houses and property in all worth sixty thousand dollars being burned,” per Ovando Hollister in his book, The Mines of Colorado.

This Rocky Mountain News article, “The Fire at Nevada” from November 7, 1861, gives more detail and the impact to Central City:

“As we expected the conflagration in and about Nevada was not near so great as first reported. Yet the loss must be severe, and many who have lost their houses and household goods, and are at the same time thrown out of employment, must suffer the coming winter.

There was no damage done in Eureka, except the burning of a few cabins at the head of Prosser Gulch. The following is an extract from a private letter from Central City, bearing date Tuesday, the 5th instant:

The fire that was raging last night at this time has entirely died out. It originated above Nevada City, in the timber, and was first discovered on Monday morning about eight o’clock; by noon it was down in the city. The principal part of town was burned out. Whitcomb’s Mill was the only (mill) burned. The building was a total loss. The machinery was not entirely destroyed. They had six hundred cords of wood burned. The most intense excitement prevailed throughout Central City the whole of last night; merchants, hotel keepers, saloon keepers, and in fact every person, moved their goods into prospect holes and tunnels, and this morning they were all busy carrying them back again—the town being considered safe. Hensfield and Co. lost about $600 worth of goods, principally clothing, which was stolen. Rosenfield lost about one hundred dollars’ worth, the same way.”

“Of all American institutions, the saloon was the quickest to move west with the people. In the first waves of frontier settlement, Americans left in their wakes schools, churches, city halls, banks, and other institutions. Saloons, however, sprouted quickly along the western trails, where they often became the nuclei of new towns,” per Thomas Noel, as he describes the typical frontier saloon, in his book, The City and The Saloon. Early on, there may have been 13 saloons in Nevada City, but the saloon count in the 1880s and 1890s was under ten.

END_OF_DOCUMENT_TOKEN_TO_BE_REPLACED

Where the dead get to tell their story By Jaclyn Schrock On Saturday, August 21, the Gilpin Historical Society held their annual Cemetery Crawl. Tickets allowed the shuttle of hundreds of guests from the Teller House parking lot to the Cemetery. Depending on v... END_OF_DOCUMENT_TOKEN_TO_BE_REPLACED