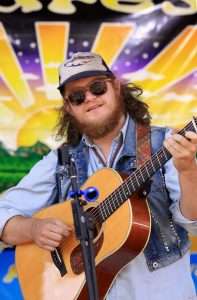 The best little music fest in the West

Kyle Hollingsworth of popular String Cheese Incident opened this year’s version of NedFest on Friday with his inspired electric keyboard-driven numbers and improvisational jams. To close the evening, Grammy Award-winning bassist Oteil Burbridge celebrated his birthday alongside a formidable cast that included: guitarist John Kadlecik of Dark Star, Rat Dog’s Jay Lane on percussion, and Alfreda Gerald belting out vocals on a par with Aretha Franklin.

Flash Mountain Flood, Malai Llama, Fletcher’s Cove, and Euforquestra fell squarely in the jam band category that drove Saturday’s lineup. During a “tweener,” the Farmer Sisters of Jamestown shared a resonant original song that told of the death, devastation, and ongoing recovery from the flood of September, 2013. Exotic fire dancers offered a change of pace before Colorado favorite and NedFest regulars, The Motet, grooved into the night.

Sunday began with the Young Musicians Showcase that featured budding talent. Next on the schedule, with local players and dedicated listeners, Caribou Mountain Collective demonstrated once again why everyone loves their skillfully performed brand of bluegrass. Keith Moseley sat in on bass guitar for husband-and-wife team Stell and Snuggs who logged 6,000 nautical miles on their sailboat Catherine in 2013 and 2014 entertaining audiences from New York to the Caribbean. They describe their music as acoustic gypsy soul with calypso overtones. Jarad’s Cajun accordion riffs and Christel’s ukulele and flowing flute got the crowd moving with the lively number “Hey Little Bird” and Georgia Satellites’ “The Future’s So Bright, I Gotta Wear Shades.” With strong country rock influences, Great American Taxi executed a deft rendition of the Allman Brothers Band’s “Ain’t Wastin’ Time No More.” Vince Herman and friends brought it home in high gear, wrapping up another highly entertaining and successful NedFest – the best little fest in the West.

END_OF_DOCUMENT_TOKEN_TO_BE_REPLACED

Benefitting the county, schools, and much more By Don Ireland   This year marks the 30th anniversary of casinos opening in the former little mining towns of Black Hawk, Central City and Cripple Creek, Colorado. In those early years, smoking was allowed inside ... END_OF_DOCUMENT_TOKEN_TO_BE_REPLACED