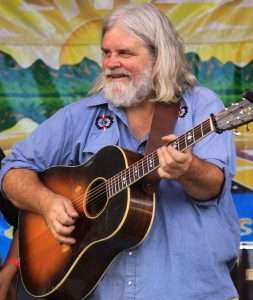 When NedFest founder “Michigan” Mike Torpie took his own life on Thanksgiving of 2011, he might not have realized the full extent of peoples’ lives he had and would enrich and how much he would be missed. During a “tweener,” Mike’s friend Danny Schafer presented a song he composed in his honor. In a voice and picking style reminiscent of Chicago great Steve Goodman, Danny sang of fond memories, good times, and a few regrets relating to his departed friend.

With Mike Torpie’s brainchild as successful as ever, concertgoers weren’t sure what to expect when Friday’s headliner MarchFourth quickstepped into town. An amalgamation of marching band, drum corps, circus act, and electric guitar, their percussion-driven horn section quickly won the crowd over. Trombone and trumpet solos were highlights as were the stilt walkers and dancing girls.

The Funky Tonk Heroes kicked things off on Saturday performing a mixture of bluegrass, country swing, rockabilly, jazz, and classic rock. Comprised of five Colorado Front Range musicians, they are: Andrew Anderson, John Heiland, Larry Novissimo, Adam Redder, and Andy Gaydos whose pedal steel playing is at home in the mountains or flatland.

Another Colorado band followed, daring to meld alternative-folk-Americana with the high-energy of punk. Clay Rose’s acoustic guitar and dynamic vocals define the Gasoline Lollipops – taking country music to another level.

If you’ve ever wondered where future musicians of the bluegrass genre will come from, you need look no further than Annie Savage’s Folk Art Revival Music School in Lafayette. With an emphasis on performing before live audiences if they so desire, kids from age seven to seventeen are taught how to play bluegrass standards, Celtic ballads, and pop songs. Their Young Pickers group appears at festivals and shows across the state through the Colorado Bluegrass Music Society. As the opening act at NedFest Sunday, their newly acquired skills were impressive, regardless of their ages, and fresh voices sweet to the ear. They have just released their first CD “Rock Me Mama” available at www.SavageFiddler.com.

In an era where many bands describe their music as a long combination of styles and influences, the Caribou Mountain Collective makes no apologies for doing one thing and doing it well – performing traditional bluegrass the way it was meant to be played. Accomplished dobro player Allen Cook recently took first place at the RockyGrass dobro competition. Etienne Cremieux’s fiddle hits the peaks and Miles Perry’s original compositions are simultaneously uplifting and mournful.

What Vince Herman brings to the local music scene is immeasurable. A “hometown boy made good,” his ebullient nature is inspiring as the unofficial ringleader that holds the mountain community of musicians together. It was obvious that returning to NedFest Sunday to perform onstage alongside his sons Silas and Colin provided joy to his life as does sharing his unique brand of grassroots pickin’ with ever appreciative listeners. Vince’s version of “Sweet Child O’ Mine” by Guns N’ Roses rocked the house.

END_OF_DOCUMENT_TOKEN_TO_BE_REPLACED

Where the dead get to tell their story By Jaclyn Schrock On Saturday, August 21, the Gilpin Historical Society held their annual Cemetery Crawl. Tickets allowed the shuttle of hundreds of guests from the Teller House parking lot to the Cemetery. Depending on v... END_OF_DOCUMENT_TOKEN_TO_BE_REPLACED

Benefitting the county, schools, and much more By Don Ireland   This year marks the 30th anniversary of casinos opening in the former little mining towns of Black Hawk, Central City and Cripple Creek, Colorado. In those early years, smoking was allowed inside ... END_OF_DOCUMENT_TOKEN_TO_BE_REPLACED