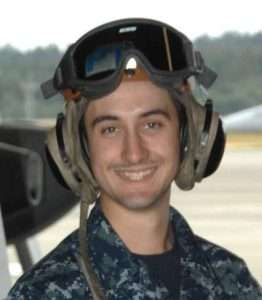 A 2015 Nederland Middle-Senior High School graduate and Nederland, Colorado native is serving with a U.S. Navy electronic attack squadron that flies the Navy’s newest and most technologically-advanced aircraft, the EA-18G Growler.

Airman Jacob Tregay is an aviation structural mechanic with the “Gray Wolves” of Electronic Attack Squadron (VAQ) 142, one of 14 Navy electronic attack squadrons based in Whidbey Island, Washington.

“The best part of my job is that I get to work around multi-million dollar planes,” said Tregay.

Taking off from and landing on Navy aircraft carriers as well as supporting expeditionary land-based operations around the world, the Growlers and their crews engage in electronic warfare, one of the most important components of modern air combat, according to Navy sources.  The electronic warfare mission involves jamming enemy radar and communications systems in order to render air defenses ineffective.

To accomplish these tasks, the Growler has a sophisticated electronic warfare suite, complete with advanced receivers, jamming pods and satellite communications.

“I really like the look of the Growler verses other fighters,” said Tregay. “They’re just too cool.”

As a member of one of the U.S. Navy’s squadrons with the newest aircraft platforms, Tregay said he and other  VAQ-142 sailors are proud to be part of a warfighting team that readily defends America at all times.

“This squadron is very welcoming,” said Tregay. “Everyone is kind and they encourage you to be the best.”

Sailors’ jobs are highly varied at VAQ-142, according to Navy officials. Approximately 65 officers, 400 enlisted men and women, and 110 civilian contractors make up and keep all parts of the squadron running smoothly – this includes everything from maintaining airframes and engines, to processing paperwork, handling weaponry, and flying the aircraft.

“Every day I feel an extraordinary amount of pride to serve alongside our great nation’s most inspiring men and women,” said Capt. Scott Farr, Commander, Electronic Attack Wing, U.S. Pacific Fleet. “Our team is filled with hardworking and highly qualified professionals who hold uncommon levels of responsibility and accountability in support of our mission: to maintain, fly, and fight the Growler around the world. Their work ethic, commitment, enthusiasm, and esprit de corps are second to none!”

Serving in the Navy, Tregay is learning about being a more responsible leader, sailor and citizen through handling numerous responsibilities.

“The Navy has taught me to grow up and to take responsibility for my own actions,” added Tregay.

Why Being There Matters

On our planet, more than 70 percent of which is covered by water, being there means having the ability to act from the sea. The Navy is uniquely positioned to be there; the world’s oceans give the Navy the power to protect America’s interests anywhere, and at any time. Your Navy protects and defends America on the world’s oceans. Navy ships, submarines, aircraft and, most importantly, tens of thousands of America’s finest young men and women are deployed around the world doing just that. They are there now. They will be there when we are sleeping tonight. They will be there every Saturday, Sunday and holiday this year. They are there around the clock, far from our shores, defending America at all times.

Thank you very much for your support of the men and women in U.S. Navy, deployed around the clock and ready to protect and defend America on the world’s oceans.

END_OF_DOCUMENT_TOKEN_TO_BE_REPLACED

Benefitting the county, schools, and much more By Don Ireland   This year marks the 30th anniversary of casinos opening in the former little mining towns of Black Hawk, Central City and Cripple Creek, Colorado. In those early years, smoking was allowed inside ... END_OF_DOCUMENT_TOKEN_TO_BE_REPLACED