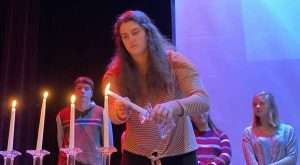 The event began with an introduction from Dusty Newberg discussing what National Honors Society is: an organization that recognizes exceptional students who have a 3.5 or higher and show characteristics such as scholarship, leadership, service, and character.

Following that, Ann Myers introduced the guest speaker, Jeremy Fey, the mayor of Central City. He recognized his wife as a former NHS member, and shared his congratulations and words of advice to the inductees. Also speaking to the inductees were current NHS members. Each of them shared a trait valued and sought out in NHS and NJHS members. Tristin Braning, Samantha Smith, Damian Sonsino, and Sarah Trujillo spoke about what it meant to be a leader, to have character, to volunteer, and to be scholarly.

Then, Ann Myers recognized Jordanna Gagnon, Jordan Hobson-Kroll, Samantha Kapke, Jiselle Osteboe, and Raygann Roark. She gave them each a hug and certificate to make their membership into National Junior Honor Society official. Accordingly, Dusty Newberg invited the National Honors Society inductees on stage. She handed each inductee a certificate followed with a hug. NHS inductees were Yisroel Bellinsky, Esmee Halsted, Lance Prewitt, Ashton Turkaly, Cassidy Wood, and Halle Yocom. After everyone took group pictures, there was a short party outside thanks to the booster club. They served small desserts and refreshments to honor the new members!

Once inducted as members, NHS and NJHS students must complete a certain amount of volunteer hours and participate in several fundraisers. Being accepted into NJHS and NHS is an accomplishment since acceptance is rigorous and rare. Congratulations to all NJHS and NHS members recently inducted!

END_OF_DOCUMENT_TOKEN_TO_BE_REPLACED

Benefitting the county, schools, and much more By Don Ireland   This year marks the 30th anniversary of casinos opening in the former little mining towns of Black Hawk, Central City and Cripple Creek, Colorado. In those early years, smoking was allowed inside ... END_OF_DOCUMENT_TOKEN_TO_BE_REPLACED