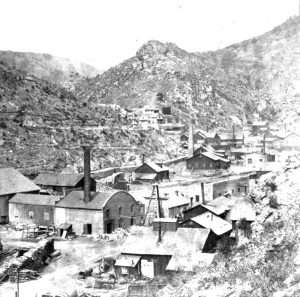 Nathaniel P. Hill first came to the Central City area in 1864, and he lived a life of meaningful accomplishments, which bettered the mining industry, and the State of Colorado.  It is hard to glean a complete picture of Mr. Hill’s life from any one source. Therefore, I used four well-written books to provide biographical details and focus on one of Mr. Hill’s accomplishments, which was the Boston & Colorado Smelter in Black Hawk.

Writer and Colorado’s first poet laureate, Alice Polk Hill (no relation of Nathaniel P. Hill), provides Nathaniel Hill’s biography, and according to Alice Polk Hill: “The miners were moving away from Black Hawk and Central because the surface ores, which yielded their gold quite freely to the stamp mill process, had been nearly all worked out. The mills and machinery for working refractory ores had cost millions of dollars, but all had failed. At this psychological moment Nathaniel P. Hill, professor of chemistry in Brown University, Providence, R.I., appeared upon the scene. He was impressed with the waste which the methods then used for the reduction of ore involved, and devoted his scientific skill to solving the problem. He conceived the idea of establishing works which could successfully treat these ores. To carry out his scheme he made two trips to Europe and spent several months in Swansea, Wales, and Freiburg, Germany examining the methods employed in those places for treating ores of gold and silver.

After satisfying himself fully of the feasibility of smelting the ores of Colorado, he returned to Boston and organized the Boston and Colorado Smelting Company. In January 1868, the smelter started operation in Black Hawk. Professor Hill was the first to treat successfully the refractory ores of Colorado, and by his scientific knowledge, energy and business sagacity placed mining on a sure and sound basis. The miners finding there would be a ready market for their ores, returned by the hundreds to their abandoned claims, and in less than five years the people of Central and Black Hawk, who had talked about moving away, were busy getting rich

Professor Hill’s solution of the then most grave and menacing problem of successfully dealing with our ores marked an epoch in the affairs of Colorado and made him conspicuous in the history of our City and State. His fine judgement and probity of character suggested Mr. Hill to the people for various offices. He was elected mayor of Black Hawk in 1871, and was made a member of the Territorial Legislature in 1872.

In order to command the ore products of all parts of Colorado and also New Mexico, Arizona, Montana and Utah, it was thought necessary that the smelter should be at some railroad center. Accordingly he built a larger smelter in Denver, known as the Boston and Colorado Smelter at Argo. In 1879 he was elected to the United States Senate to succeed Senator Chaffee. As senator he was true to his State and true to the interest of the people he represented. He introduced and carried to a successful issue many important measures.

Senator Hill was a man of integrity and ability, and in his varied and successful career proved himself worthy of his long line of distinguished ancestors. He married Miss Alice Hale of Providence, R.I., who was a woman of quick perception, tact and kindness of heart. In Gilpin County, where her husband’s smelter was located, her home was the center of hospitality. Senator and Mrs. Hill had three children.”

Writer and historian James E. Fell, Jr., provides: “He (Nathaniel Hill) was convinced that he should adopt a Welsh smelting technique known as the Swansea process. In this method the copper and iron sulfides in the ores could be used as a vehicle to collect and hold the gold and silver in a mixture known as a copper matte. This product could then be shipped to wherever it could be separated (or refined, in metallurgical terms) into gold, silver, and copper metal.”

Terry Cox, geologist and writer presents Hill’s Boston and Colorado smelter’s inception and development:  “Hill’s smelting plant at Black Hawk was a small version of the Welsh plant he had seen the year before. The prototype plant at Swansea, however, employed both a smelting operation and a refinery. Hill apparently reasoned that the ores around Black Hawk would be exhausted in twenty or thirty years and decided a refinery was too expensive to build. Although the shipping costs were horrendous, he chose to ship the concentrated matte all the way to Wales for refining…by this time, Hill’s refining contract with the Welsh refinery was due to expire, and he needed to extend it. However, the Swansea refinery wanted to raise its prices, and Hill could ill afford to raise his already expensive rates higher. Driven to desperation, Richard Pearce (knowledgeable metallurgist) finally devised a secret chemical method to extract gold and silver at the Black Hawk facility without an expensive refinery.

The smelter had also grown and was severely cramped in the narrow valley at Black Hawk. It could no longer expand to meet new demand for its services. In light of all these problems, Hill decided—and quickly convinced his eastern backers—to construct a new plant northwest of Denver. He wanted the new plant to be large, modern, and able to serve all of Colorado as well as other eastern states. He built his new “Argo” plant during 1878, fired it up in January 1879, and promptly closed the Black Hawk smelter that same year.”

Historic novel writer and historian Ellen Kingman Fisher concludes with Hill reflecting to his wife: “There is so much promise here, especially for our children. I envy that they will have the opportunity to be raised on the frontier, near the mountains. They may be tested in other ways that they would not have been in Providence, but the hardships will make them stronger—as they will continue to strengthen the two of us. This voyage will change all our lives, and it is one I’m glad we’re taking together.”