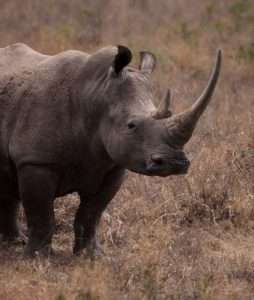 This article is the first installment of a 5-part series on Kenya.

Nairobi National Park was established in 1946 as Kenya’s first national park and is its smallest, measuring 45 square miles. Located just four miles from Nairobi’s centralbusiness district, it is home to a host of African animals including Cape buffalo, giraffe, zebra, impala, eland, hartebeest, waterbuck, baboon, warthog, ostrich, secretary bird, hyena, and lion. The only elephants in the park are found at the David Sheldrick Elephant Orphanage where they rescue sick and abandoned elephants and release them in Tsavo East N.P. after being nurtured for a few years and socialized with other elephants. A one-hour tour is offered where you may observe feeding and bath time while interacting with the babies. A 10-foot high electric fence defines the north, east, and west boundaries of the park. The south opens to the Athi-Kapiti Plains but has been increasing choked by development. Fenced-in plots for farming and livestock, housing, and mining now obstruct a large herbivore migration that once was the second biggest in the world trailing only that of the Serengeti and Masai Mara ecosystem. In 1960 one hundred thousand wildebeest made the journey, but their numbers have been reduced to a mere trickle of perhaps a couple thousand each year.

Faring better than the wildebeest are white and black rhino. Sometimes called “Kifaru (Swahili for rhino) Ark,” Nairobi National Park boasts the densest concentration of the endangered black rhinoceros anywhere on the planet with more than fifty. In the 1970s, ninety percent of Africa’s rhino population was slaughtered to supply the illicit rhino horn trade. Even today, three are killed by poachers every day with five thousand remaining. Some of the rhinos here are translocated to other parks and reserves around the country to bolster and diversify stocks. From a low of 400 black rhino in 1980, Kenya’s population of the species now stands at an estimated 745.

There are also around 60 white rhino residing in the park. The second largest land animal on earth, their name “white” rhino is a mistranslation from Dutch to English of the word wjid, meaning “wide” in reference to their wide mouths. South Africa contains 93% of the world’s population of 21,000 white rhino with Kenya having approximately 515. Plans are being considered to begin reintroducing them to Kenya’s parks as well. While you may be lucky and see a black rhino during your visit to Nairobi N.P., they are solitary browsers and mainly confine themselves to the brush and riverine forest. The white rhino on the other hand, are herd animals and are easily viewed grazing the savanna grassland.

Dave Gibson has been a photo journalist at the Weekly Register–Call for 13 years. Past articles and pictures may be viewed at www.DaveGibsonImages.com.

END_OF_DOCUMENT_TOKEN_TO_BE_REPLACED

Where the dead get to tell their story By Jaclyn Schrock On Saturday, August 21, the Gilpin Historical Society held their annual Cemetery Crawl. Tickets allowed the shuttle of hundreds of guests from the Teller House parking lot to the Cemetery. Depending on v... END_OF_DOCUMENT_TOKEN_TO_BE_REPLACED