My first fish with a vintage Pocket Fisherman 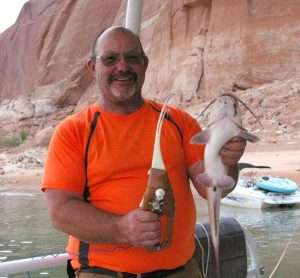 The fish was bigger than the rod and reel!

In the 60’s and 70’s, late night television was the home of the first infomercials. American inventor and marketing personality Ron Popeil presented gadgets that we couldn’t live without. He started off by offering the Chop-O-Matic, then the Veg-O-Matic, the machine that slices and dices with one swoop. Every commercial ended with the phrase, Only from Ronco.” Then Mr. Popeil invented and marketed the “Pocket Fisherman.”

The Pocket Fisherman was a lightweight all-in-one fishing rig. It included the rod, reel and a 4 cubic inch tackle box and all this fit in your car glove box, in a back pack, or even in your pocket, providing your pockets were big enough. It was labeled as the perfect gift for dad on Father’s Day or Christmas. Well I bit and with $19.95 of my hard earned lawn mowing money, I bought one for my dad for Father’s Day. He never used it because he had a literal boat load of rods and reels and he never felt desperate enough to utilize a fishing rig bought on late night TV. Over the years, the Pocket Fisherman ended up in the “Fishing Stuff” tub in our barn. Recently my son JR and I were talking about the crazy items that were invented and sold to anglers and the Pocket Fisherman, “Only from Ronco” came to mind. I showed him the vintage commercial on YouTube and then the search for the “Fishing Stuff” tub began.

The neglected invention from the 1970’s got pulled out of mothballs, cleaned, lubed and new fishing line installed. It will only cast about 12 feet, but that’s good enough to get out where the fish are. Last summer in late July, the restored Pocket Fisherman made its way to Lake Powell. As I pulled the almost 50 year old invention out of the fishing bag, the comments ranged from “What a cute little fishing pole” to “You’ve got to be kidding.” One day when fishing was slow, I decided that it was time to play with the vintage unit. I loaded up a worm on the hook and cast it out the allotted 12 feet of line into the lake. After about 20 minutes of waiting, the rod tip began to indicate that a fish was interested in what I had to offer. I set the hook and it was game on. The 3 pound catfish was way too powerful for this mini fishing unit, so I had to let him have his way and play him out. After several runs and line strip-outs, the slippery prize was in the net. Laughter broke out when my fishing buddy, Red Leader and I realized that the fish was bigger than the rod and reel. The sun set on another perfect day on the water, forty some years in the making. I caught my first fish with the “Pocket Fisherman.

Anglers tend to collect vintage and antique fishing equipment. It not because there is a great monetary value in these items, its more the memories and fun times that this gear brings into our lives. Ron Popeil and his retro Pocket Fisherman has no doubt brought memories to countless families all over the world and on that day we added an unforgettable moment to our bank of memories on the water.