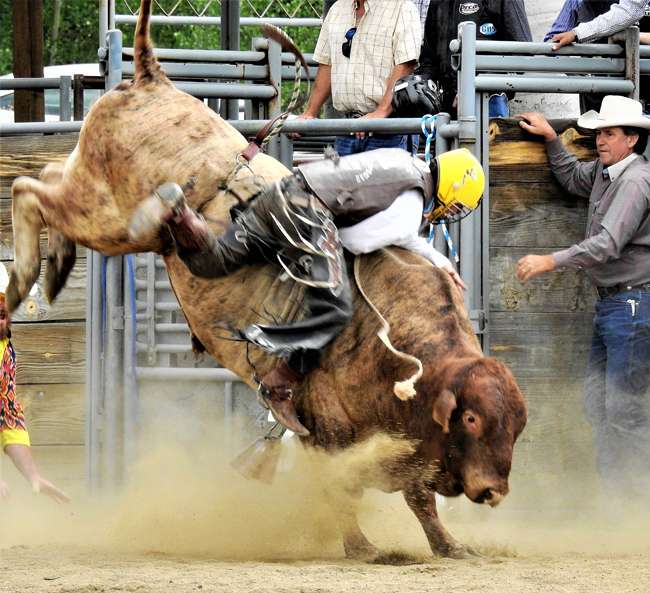 Saturday at the Gilpin County Fair

Free Ameristar Casino & Hotel Breakfast from 9-11 a.m. in the food court, offered meat or vegetarian breakfast burritos, beverages, and bananas – thanks! Nederland School Orchestra presented their joy of music, horseshoe registration began, and the staging area for the parade was set behind the Community Center.

10:30 – Extreme Dogs Show began with an audience in the bleachers and standing, amazed by the springing legs of these dogs who work so well with their trainers.

11:00 – in the arena the ATV Rodeo performed maneuvers similar to those done on horseback for the Gymkhana on Sunday. Winners of the Sport Division was Coby Pearce, and the Utility Division was Mike Nation.

11:00 – Battle of the Bands began, and the results have not been posted at press time.

11:00 – BMX bike riding course allowed youth to practice the course on bikes with helmets provided by the Gilpin International Students. Course time was taken for rides that completed all the skills in the course, missed skills added up to 30 seconds to the time. Fastest time won. First, second and third place each day won a bike helmet and first place won a gift certificate to Walmart.

12:00 – Gilpin Gourmet entries began to be tasted and evaluated. Winners of Preserved Foods was Susan Mays. Winner of Baked Goods was Shelley Meriot.

12:30 – Gilpin County Fair’s Parade began as a new event with the fair. Lining up behind the Community Center, the parade was assembled. The parade route followed Norton Drive past the Community Center parking and fair events, down the arena parking road next to the BMX track, and made one big trip around the inside of the arena fence before finishing the grand entrance of Gilpin’s 2019 Fair.

The Gilpin County Ambulance Authority Special Operations vehicle led the parade with lights and sirens. Five red-spangled riders with white and blue fringe had American flag anklets over front hooves on the horses of the Colorado Stampede Riders from Northern Colorado. Behind the Colorado Stampede was the Diamond SR Carriage with our fair Royalty Queens, Jessica Wilhelm, Samantha Smith and Alicia, smiling with royal waves to the crowd along the parade route. Next came the new Ford pickup with “Best-in-Class Towing & Payload.” Last with impatiently restrained muscles came the dog sled team. These dogs wanted to run! They are not harnessed with a lead and two pairs to just walk around at the slow parade speed. Instead of the usual sled, these dogs pulled an ATV that will be needing new brakes. They would stop to let the rest of the parade move along, but, being so anxious to go, they often tangled their harnesses. Once they were untangled, and they were allowed to go, the leader pulled them right in behind the truck with those quick feet. When they got into the arena, the leader wanted to go for the open space instead of the fence line, but listened to the musher and went the best route to show their teamwork.

1:00 – Mutton Busting, a favorite tradition of rodeo, allowed helmeted and pad-vested children lay on the sheep’s back and hold onto wooly fluff that galloped out of the pen once placed on the animal. This was the first of three Mutton Busting events during the fair. Winners have not been posted at press time.

1:30 – Extreme Dogs Show had a packed crowd that cheered for the dogs doing tricks in competition with each other. Later, all had their own version of extreme obedience and fun!

1:45 – Voting for the Battle of the Bands occurred, with winners unknown presently.

2:00 – Talent and Karaoke Show thrilled all who prepared for this day and those who helped them prepare, and those of us who just happened to come along at the right time. Winners were the Gilpin Kids.

2:45 – Sheep Scramble was a fair chase through the arena.

3:00 – Gilpin County Fair Bulls and Beads Rodeo began with announcer David Shanahan who welcomed all who came to be thrilled for this annual event, put on by brave, but careful cowboys. Colorado Stampede riders entered with flags spread wide with speed while the Nederland School Orchestra played our Star Spangled Banner.

Clown funny man, Myrick with his barrel for protection in the bull riding competition, was supporting Kolbi Hesky for her debut clowning relationship with a Colorado rodeo crowd. During bull riding, Kolbi stayed between the fence and the arena stands. She is a high school student in Carson Nevada and has been clowning there. Myrick has been at Bulls and Beads Rodeo for many years, so brought along the niece of the fondly remembered Donny West. More on Mr. West, Myrick, JD Ford, and the memorial belt buckle awarded in next week’s story of stock providers for our rodeo.

Many bull riders had short rides, some had longer ones. Sadly, one was only 2 tenths of a second short of making the 8 second ride to score. The Ranch Broncs had a better time staying on the bucking horse. The pick-up men had their work cut out for them! It took a long time to calm down the feisty animals and herd them back into the gate. Most of the animal athletes seemed to really enjoy the lime light and crowd responses to their twirling, kicking, stomping, rearing and charging…even after the rider was long gone.

Winner of Bull Riding was Brian Larson, third time winner in Gilpin, and once with 2nd place.

The rodeo, like the fair, is free and plenty of folks crowded into the grandstands to see the highlight event of the fair weekend. None could walk away afterwards disappointed, it is clear how well the animals are treated and the cowhands all do a fabulous job putting on the rodeo. A few cowboys and clowns had some limps or aching spots. Attention from the paramedics assured recovery, as all seek to be in control of the animals who are trained athletes.

4:30 – Extreme Dogs Show had a whole new crowd to watch those long tongues hang out as they raced and performed.

6:00 – With threatening clouds rolling through, the fair closed for the day – more fun to be had on Sunday!

END_OF_DOCUMENT_TOKEN_TO_BE_REPLACED

Benefitting the county, schools, and much more By Don Ireland   This year marks the 30th anniversary of casinos opening in the former little mining towns of Black Hawk, Central City and Cripple Creek, Colorado. In those early years, smoking was allowed inside ... END_OF_DOCUMENT_TOKEN_TO_BE_REPLACED