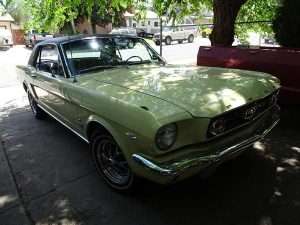 Pursuing a passion for over 40 years

With the exception of the paint, I have done all my own restoration work. Over the years, I’ve enjoyed belonging to the Early Mustang Club, with many driving events and car shows. One of the early shows, I participated in, was the Horsefeathers show in Central City on August 9, 1981. It’s called Horsefeathers because both the early Mustang (horse) cars and the thunderbird (feathers) cars participate. This show is still held the second weekend in August, in different locations. It would be nice to have another Mustang show in Central City.

If you too have a passion for cars, trucks, and motorcycles, send your story and photos to aaron.storms@wrcne.ws and we’ll feature your ride. If you’re passionate about something else, let us know and we’ll try to feature that as well. We like adventure stories, stories about your misspent youth, and other interesting projects. We live in a very diverse community with lots of things going on – let us know what you’re up to!

END_OF_DOCUMENT_TOKEN_TO_BE_REPLACED

Where the dead get to tell their story By Jaclyn Schrock On Saturday, August 21, the Gilpin Historical Society held their annual Cemetery Crawl. Tickets allowed the shuttle of hundreds of guests from the Teller House parking lot to the Cemetery. Depending on v... END_OF_DOCUMENT_TOKEN_TO_BE_REPLACED