Music has its charms for two Gilpin Middle School students 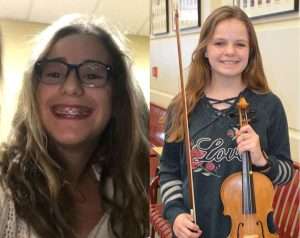 The Colorado Children’s Chorale (CCC) was started in 1974. The group’s repertoire varies from opera to musical theater to standard choral compositions, and CCC performs regionally, nationally, and overseas. It annually trains 400 members between the ages of seven and 14, representing more than 180 schools in the Denver metro area and beyond.

Sixth-grader Dannika found out about the CCC when she was eight or nine years old and was attending a performance of “Annie” in Denver with her mother.

“My mom saw an ad for the Chorale in the program. I was interested in trying it.”

No prior experience was necessary to get into a training choir. The CCC website notes the main prerequisites for an aspiring young chorister: “He or she must love to sing, be outgoing and have the appropriate vocal range – in other words, be a little ‘ham’ who can sing high!”

Dannika went for an audition, which she found a bit nerve-wracking.

“You had to sing in front of two people who were directors of the choir. We could choose one of three songs they provided for the audition — the national anthem, ‘America the Beautiful,’ and ‘Twinkle, Twinkle, Little Star.’ I chose ‘Twinkle, Twinkle.’ It went well.”

Dannika began with prep choir, advanced to the apprentice choir, then the concert choir. She made it to the highest-level choir, which is the tour choir, a short time ago. This will be her first time to tour, and she is excited about it.

“There are two different tour choirs, national and regional. I’m in the regional one, and this year we are going on tour in April around Colorado, Nebraska, and Iowa. There are about 90 or 100 of us, and we’ll ride on buses and stay in hotels. We’ll be gone for six days, and I get to miss school!”

She pauses. “I hope they’ll let us bring homework.”

The artistic director is Deborah DeSantis, who directs the tour choir, and there are three associate directors.

Dannika relates that sometimes the choir sings in unison, but mainly they divide into parts.

“We split into colors and letters. There are reds, yellows, greens, and blues. I’m a yellow. That means we sing the higher notes, but not as high as the reds.”

There are also letters A, B, and C. Boys and girls can sing the same part, depending on their vocal range.

If you can figure out the colors and letters, then reading music is a snap. Dannika can do so and started learning to read music when she first joined the choir.

She describes a typical rehearsal, which goes for two hours every Monday and Wednesday at Lakewood United Methodist Church.

“We start off with warmups and then sing some songs together. Then we go into sectionals by color. After that, we sing more songs and get snacks and then dance.”

The group does about eight or ten concerts each season from September through May. The next program the young singers are preparing for is “A Classical Jazz Evening” on March 1 at St. John’s Cathedral in Denver. That will be followed by “Spring with the Children’s Chorale” on April 13 at Boettcher Concert Hall.

Concerts are a time to shine.

“I just like singing and being on stage. I don’t get nervous before a performance any more. I feel happy when the audience applauds and I feel I’ve done a good job.”

In addition to singing, Dannika enjoys drama. She stepped into the role of Prince Eric in the Peak to Peak Players’ performance of “The Little Mermaid” a few months ago and has participated in Gilpin Middle and High School plays. In the Gilpin play in April, “She Kills Monsters,” Dannika’s character is a ‘90’s Kid. However, she will not be singing, as the play is not a musical.

She also participates in the Gilpin school choir, directed by Randi Ebers. Other favorite activities include basketball and horseback riding; summers find her competing in gymkhana events on her horse Daisy.

Aucklynn, a busy eighth grader, engages in all facets of the performing arts. Through music, dance, and drama, she not only hones her skills in these disciplines but also makes good friends.

“I really enjoy doing the arts,” she says. “They help you with social skills and working with other people. It creates friendships — I’ve met people from all over the area that I wouldn’t have gotten to know otherwise.”

Aucklynn had been playing for about two years and was in third grade when her mother found out about the Colorado Youth Symphony Orchestra (CYSO). The CYSO was formed in 1984 to provide orchestral experience for school-age musicians. It takes youth from elementary school up to age 21, based on their skill level.

Aucklynn says that Gary Haarbye, Gilpin’s music teacher at that time, encouraged her to audition.

“I was really interested. I auditioned by playing ‘In the Hall of the Mountain King’ and got in.”

Her technique and skill level, tone quality, rhythm, intonation, and musicianship were considered for admission.

CYSO offers several ensembles, and Aucklynn started in the “Sinfonia,” or beginner level. She is now in the “Philharmonia,” or intermediate group, which includes roughly two dozen string and wind musicians.

The CYSO season runs during the basic school year. Aucklynn rehearses with the group for two hours every Monday evening at Colorado’s Finest High School of Choice in Englewood. Of the three seasonal concerts in 2018-19, the first was in November at the Pinnacle Charter School Performing Arts Complex. A spring concert will be held on April 20 and a pops concert on May 5, both at Metropolitan State University of Denver.

“We’ll be playing ‘Eight Variations on a Well-Known Ancient Hymn” and ‘Meistersingers,’ plus other songs,” Aucklynn notes. “Our director is Dr. Brandon Matthews, the music director at Metro State. I like him; he’s good. He’s pretty patient, but he gets annoyed if we don’t practice!”

Accordingly, she usually practices at home for half an hour a day.

Aucklynn plays in the second violin section this year but has also played first violin. “Dr. Matthews doesn’t emphasize chair position too much — he wants people to have different experiences,” she explains.

Rehearsals are hard work. “We work on bringing the music together as group and making sure it sounds good. Sometimes we’ll play a bar and he’ll say, ‘It’s not right, do it again.’ It sounds really pretty when we all get it together.”

Aucklynn is the proud owner of a 100-year-old master violin. She relates that she had been taking private lessons at Golden Music. One day, her teacher revealed the music center’s vault of fine violins, including the beautiful old wooden fiddle. Aucklynn was immediately taken with it.

“I got it three years ago for my birthday, and I love it.”

When she is not busy with the CYSO, Aucklynn joins other musical Gilpin students for band and choir and takes ballet and tap lessons every Tuesday.

“I’m also auditioning next Wednesday for an orchestra that meets at CU. It’s for anyone who has at least a year of experience,” she says.

Drama is another of Aucklynn’s passions. When she was about ten, she participated with the Rocky Mountain Theatre for Kids. She has performed in “Annie,” “The Little Mermaid,” “The Wizard of Oz,” and “Seussical” with the Peak to Peak Players and has been in five of Gilpin’s school plays. Her next role will be as Evil Tina, the cheerleader, in Gilpin County School’s upcoming play, “She Kills Monsters.”

In a performance of the academic kind, Aucklynn will compete with her team in the Regional Middle School Science Bowl in early February.

END_OF_DOCUMENT_TOKEN_TO_BE_REPLACED

Benefitting the county, schools, and much more By Don Ireland   This year marks the 30th anniversary of casinos opening in the former little mining towns of Black Hawk, Central City and Cripple Creek, Colorado. In those early years, smoking was allowed inside ... END_OF_DOCUMENT_TOKEN_TO_BE_REPLACED