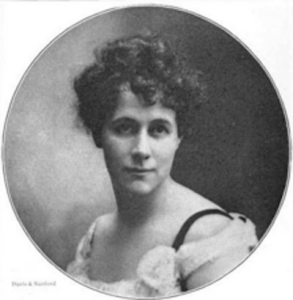 The pioneers with their interesting reminiscence of early days are fast passing away and with them will depart unnumbered incidents whose local coloring makes them most entertaining, but whose significance is not deemed of enough importance to piece them in the annals of history.

Of the pioneers who braved the hardships of a Western life, perhaps none have enjoyed a happy old age so notably as Mrs. H. E. Ford, mother of Charles D. Ford, registrar of the United States land office at Denver.  Mrs. Ford, who is in Denver, visiting her son for the remainder of the winter, celebrated her eightieth birthday last week, but to listen to her animated conversation and to look into her interested face, which lights up with enthusiasm as she recalls the days of her younger womanhood, one would never imagine.

The story of Mrs. Ford’s experiences is an interesting one. In 1860, her husband with the confident hope of finding riches in the Rockies, came to Colorado and finding the reports, which had reached the Eastern State of Maine were not exaggerated, decided to bring his family West. The Fords had been living at Leavenworth, Kansas for some time, and from there the journey across the plains was made in 1860. That journey, which took just thirty-two days and which was full of interesting experiences and excitement to the strangers of Western life, was made by stage, and with Mrs. Ford and her husband, who had just been to New York in the interest of his mining companies, her brother General Bearce, her two children, and several others. Mr. Ford rode horseback. One of the horses was alkalized (weak and losing weight), which necessarily rendered their progress more difficult. When they reached Denver, which was then a mere suggestion of a town, they stopped at the old Broadwell House at 16th and Larimer streets – the first structure which could really be dignified with the name of hotel. Only a few days were spent in Denver, as they desired to push on to their future home in Nevadaville, where Mr. Ford’s interests were located.  Here they lived in a tent until their home, which was the first house erected at the place, was built.

The Fords did not remain at Nevadaville a year, but removed to their ranch six miles out of Denver. From here, they came into Denver in order that Charles and his sister Susie might have the advantage of attending Miss Ring’s school. Miss Ring was the first school teacher in Denver and came across the plains with Mrs. Ford. The house in which the Fords lived was across the street from the old Planters Hotel, which stood opposite the site now occupied by the American House (16th and Blake streets).

In 1871, after the family returned to Denver, Mrs. Ford assumed charge of the Rocky Mountain house. She built the Gilpin House (located in Denver) and for two years ran this hostelry.

The next change in her life was going to Monument, where she started the first hotel. The Monument House she built and for eighteen years made the place famous as one of the best hostelries in the Rockies.

The home which Mrs. Ford now owns in Monument and which she lives alone, her husband having died twenty years ago, is one of the attractive places of the town.

The interesting pioneer octogenarian (eighty-year old) has eight grandchildren and fifteen great-grandchildren, and a time when she is most happy, is when the younger ones gather around the grate fire to listen to her tales of how Denver was forty years ago.

“We did not suffer many of the pioneer’s hardships,” said Mrs. Ford, “and I think enough has been said about the trials and tribulations of the early settlers of Colorado. People seem to forget all about the good times they had, or at least they never talk about them.

We went west in 1860 and the trip took us thirty-four days. My husband came on horseback with twelve young men, and arrived some time ahead, before I followed with two ladies, my son, and my daughter.

What was there in Denver? Well, all I can remember was the Broadwell House. That is where we stayed and it seemed to be the only building in sight. Nevada, now called Nevadaville, was then much larger than Denver and it was in this queer little mining town that we located. We lived in a tent until our furniture and mining machinery was hauled across the plains at no little expense. Then we built a house, and from the day it was built, until we moved away, the house was full of company.

There were a great many young men here, but very few young women. As soon as a young woman came west she was besieged with suitors and at the dances which were the only form of entertainment, the young ladies had more partners than they could conveniently accept.

There were a great many funny people coming west. People with all sorts of strange, visionary ideas about what they were going to do when they got here. They were all going to strike it rich. For everyone thought that all people had to do was to pick up the money and then leave the state or stay as they chose. The men who were the most arduous in their chase for the golden dollar made any sacrifice to get to Colorado. Many could be seen coming across the plains wheeling their household goods in wheelbarrows. On many of the wagons was printed the inspiring saying, ‘Pike’s Peak or Bust,’ and in several instances we saw wagons going eastward with the short word of the motto visible, on the travel-stained sign Bust.

Nobody came west for their health. Indeed, it was only the most hearty and enduring who ventured on the trip at all, and even then it oftentimes proved to upend their strength.

Among the most enterprising of those who came West were a band of women who were then termed ‘strongminded.’ They had come to found a state for women, and had brought with them a line of apparel which, however comfortable it might be, was far from becoming. This was the origin of the Colorado bloomer. They called themselves “The Progressive Party.” Everywhere near Nevada (Nevadaville), people could be seen picking at the ground. Men and women spent hours digging up bits of earth and washing it in a basin or wash bin. At night they would go home disheartened and weary, but in the morning they were just as hopeful and worked just as hard and equally as useless. The mining assayers had to carry sacks of ore on their backs. They would take it to Denver to be examined, and would then go East to form a company.

A vigilante committee administered justice according to its own understanding of the word. If they deemed a man wasn’t living up in the proper standard of citizenship, they made no complaints and listened to no pleas, but simply took the prisoner outside the town, and having procured a rope and a tree, they tried the case in their own way.”

Mrs. Ford is spending the winter with her son, Charles D. Ford, who is the registrar of the United States land office. Her husband was a well-known miner and prospector, who died in 1882. During the summer and fall she lives in her own home at Monument, Colo., spending only the winter months at the home of her son, on Fillmore Street in Denver.

END_OF_DOCUMENT_TOKEN_TO_BE_REPLACED

Where the dead get to tell their story By Jaclyn Schrock On Saturday, August 21, the Gilpin Historical Society held their annual Cemetery Crawl. Tickets allowed the shuttle of hundreds of guests from the Teller House parking lot to the Cemetery. Depending on v... END_OF_DOCUMENT_TOKEN_TO_BE_REPLACED

Benefitting the county, schools, and much more By Don Ireland   This year marks the 30th anniversary of casinos opening in the former little mining towns of Black Hawk, Central City and Cripple Creek, Colorado. In those early years, smoking was allowed inside ... END_OF_DOCUMENT_TOKEN_TO_BE_REPLACED