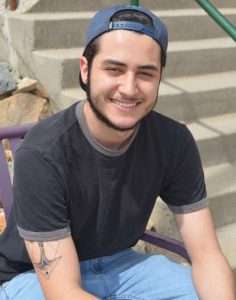 As Albert Einstein said, “Life is like a riding a bicycle. To keep your balance, you must keep moving.”

Gilpin High School’s salutatorian takes this admonition literally. Nick Raez and his family have moved frequently during Nick’s 18 years of life. As I spoke with him the other day about his school success and his future plans, Nick shared some insights about how living in different parts of the country can teach a person about human nature.

Nick was born in Cleveland, Ohio. When he was only two, his family moved to Ocean Springs, Mississippi, a city on the shore of the Gulf of Mexico, where they lived for six years. When Hurricane Katrina struck in 2005, Nick’s whole neighborhood was destroyed. The Raez family started over in Maricopa, Arizona, and lived there for three years. Then it was back to Mississippi, this time in the Civil War town of Vicksburg. When Nick was in seventh grade, his family settled in Charles Town, West Virginia, where Nick’s mother was the director of finance at a casino. At the end of Nick’s junior year, his mother took a promotion to become the director of finance at the Lady Luck Casino in Black Hawk.

“It’s been an experience,” is Nick’s assessment. “Moving often makes you grow up a lot faster and adjust faster.”

Nick’s family includes his mom, Sonja, and his dad, John, plus his 19-year-old sister, Keviana, and 15-year-old brother, Austin. Nellie and Noelli, a pair of miniature schnauzers, complete the clan.

During the family’s move to Colorado, the dogs sat in the passenger seat of the moving truck and kept Nick company while he drove. Fortunately, he likes traveling and road trips, although he would admit that a U-Haul is hardly his idea of a dream car.

Yes, Nick likes to keep rolling, especially on his skateboard. “But I’m not very good,” he confesses.

His wide range of interests includes playing the guitar, giving tattoos to people, and cooking (everything from Chinese to Italian.)

His taste in food and drink also includes Ramen noodles and coffee.

“I love coffee. I have about six cups per day.” Appropriately, he works at the Mountain Mocha Café in Black Hawk.

Reflecting on games and sports, he says, “I likes chess, but I’m not very good at that, either! I used to do football for three years, but I’m not very team sport oriented. It’s too hard when you move. I prefer more independent sports; that’s how got into skateboarding.”

Favorite books include Jules Verne’s 20,000 Leagues under the Sea and J.R.R. Tolkien’s The Hobbit and Lord of the Rings. An unconventional choice that shows his interest in both plants and psychology is The Secret Life of Plants by Peter Tompkins.

He gravitates toward movies like Monte Python and the Holy Grail.

“I like older comedy. It’s not as …” He pauses. “I’m searching for a PC word. It’s not as raunchy, just intellectual, and you have to know stuff about history. I like to watch lighthearted stuff, not serious or sad.”

Christmas is his best-loved holiday, not because of the gifts, but because he likes spending time with his family. Nick was also born in December.

Drawing is another favorite pastime. Nick was in advanced placement art at his old school and specialized in dramatic poses of the human body.

In his previous school, he was involved as a treasurer in student government and a set designer in the theater program, noting that the school used to win state theater competitions.

Nick has only attended Gilpin High School for the past year. He likes attending a school with a small student population, because it allows for more personal interaction between students and a more personalized learning experience.

Still, he observes that a small community can be limited because of the perspective that the students have. In his experience, “It’s better to be in a bigger school, because it teaches people to interact in a different way than they are used to. You become more rounded as you get to know different people. Here, you see the same people all your life.”

Nick, with his high 3.9 grade average, has been a year ahead of schedule all through high school. He started advancing academically in the eighth grade, with high school-level courses in math and science. All the way through, he has been a year ahead and has even tutored fellow students. In fact, he could have graduated already had it not been for moving to Gilpin last year and losing some credits.

Nick plans to attend the University of Arizona in Tucson. With his abilities in art and math, his intended major of architecture is a natural choice.

“I’d like to pursue environmental architecture, a blending of the manmade with the environment. I want to learn how to make a house more environmentally efficient. In Arizona, that is a big deal right now, because water conservation is important.”

After completion of the five-year college program, Nick’s goal is to be a private contractor, building environmentally efficient houses and office buildings.

Nick will be assisted in his higher education goals by a $56,000 academic scholarship from the University of Arizona, plus the Black Hawk scholarship.

He recommends that younger students simply focus on getting good grades and being nice to people.

“Don’t worry about stuff, because in a day, a week, or a year, it won’t matter. Don’t take out any unhappiness on those around you. Rise above.”

Moving so many times over the years has influenced Nick’s outlook about himself and others. He finds that get acquainted with a new place and new people every few years pushes a person to be more outgoing and independent.

“Moving teaches you to draw on yourself. It’s helped me be more open-minded. You get to understand people and see the environment they have grown up in. People’s perspectives and interactions with each other can be limited to where they’ve lived. I don’t know what it would be like to always live in just one place.”

His fascination with people leads him to conclude, “As a whole, the power of the individual is important, but it’s the entire humanity that is important.”

As he journeys through life, Nick is sure not only to achieve personal success, but also to contribute to society with his talents. Best wishes as you move toward college and career, Nick!

END_OF_DOCUMENT_TOKEN_TO_BE_REPLACED

Where the dead get to tell their story By Jaclyn Schrock On Saturday, August 21, the Gilpin Historical Society held their annual Cemetery Crawl. Tickets allowed the shuttle of hundreds of guests from the Teller House parking lot to the Cemetery. Depending on v... END_OF_DOCUMENT_TOKEN_TO_BE_REPLACED

Benefitting the county, schools, and much more By Don Ireland   This year marks the 30th anniversary of casinos opening in the former little mining towns of Black Hawk, Central City and Cripple Creek, Colorado. In those early years, smoking was allowed inside ... END_OF_DOCUMENT_TOKEN_TO_BE_REPLACED