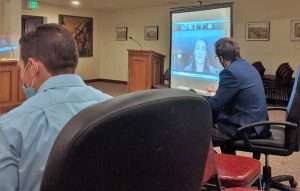 Council met with Staff for a work session at 6:02 pm prior to the regular meeting on Tuesday, April 6, 2021, for a discussion with Trout Unlimited, for an abandoned mine lands prioritization plan. The Project provides a systematic and holistic approach to prioritization for the City of Central in environmental protection from hazardous mining waste. The historic mines that brought Central City to fame are now a visual reminder, along with their wastes, of the past. The mines and their waste; however, contain heavy metal contaminants that pose serious health risks when ingested. Precipitation from storms and melting snows contribute to erosion that allows these contaminants to leach out of the earth and into our drinking water.

Lauren Duncan, Abandoned Mine Restoration Project Manager with Trout Unlimited (TU) presented the proposal via Zoom. The cost of the project would be $6,318 for TU staffing plus $486 in travel costs. Additionally, TU would require equal staff time from Central City employees (30 hours). The partnership would help ensure that the final proposal meets the needs of the City.

“We do not do caps” said Duncan in response to Alderwoman Johnson’s question regarding the cap to the tailings above the ‘T’ Lot. TU uses several other site-specific methods including a transparent spray-on substance that is environmentally friendly.

The final project report, including community input, is expected to be completed by June 30, 2021.

Mayor Fey led the Pledge of Allegiance and then asked for any amendments or additions to the evening’s agenda. Item #8 was asked to be deleted (pending items). This was part of the agenda in anticipation of requiring a public discussion resulting from the Executive Session.

The Mayor called for a motion to approve the consent agenda which consisted of the minutes from the March 16 meeting and regular bill lists through March 9. Alderman Johnson asked about the cost of having the City plow truck be towed and Manager Miera responded that there is a $1,000 deductible, but the remainder is covered by insurance. Alderwoman Tinucci clarified that a $5,000 donation for the Belvedere Foundation had to be deposited into the City account and then the City cuts a check to the Belvedere Foundation, so the expense is a pass-through. Alderwoman Laratta moved to approve the Consent Agenda and was seconded by Alderman Aiken. The motion passed unanimously.

Mayor Fey opened the floor to the public for anyone who wished to speak to a topic on the night’s agenda. No one chose to address the council.

The second reading of one Ordinance was on the docket.

Mayor Fey opened the public forum and no one chose to speak to council.

Alderwoman Laratta moved to approve Ordinance 21-02 and was seconded by Alderwoman Johnson. Alderwoman Laratta commented, “I think this is a good idea.” Mayor Fey reiterated his comment from the prior meeting that they should “not get into the habit” of alleviating the burden and cost from the State on their resolutions. The motion passed unanimously.

Manager Miera commented that a trash disposal RFP went out and several companies expressed interest, but they received no proposals by the deadline, and so they will remain with One Way, Inc for rubbish removal.

The City will be participating in a State hearing tomorrow, April 7, regarding handling of the Historic Preservation Commission funds.

Miera also commented that the first quarter financials of 2021 show that they are “right on track” with the budget and their projections.

Alderwoman Johnson asked if there is an estimated time for the Stairway to Heaven project? Miera responded that they received an initial quote, but they think they can reduce the costs with some changes, so they don’t have a final quote. The project is a stairway from Central City up to the Gold Mountain Apartments in memory of Cody and Shelby Allen. The name, “Stairway to Heaven” is inspired not by the 1970s rock ballad by Led Zeppelin, but by a stairway behind Spruce Street leading up to the old Catholic Boys School (the cross from the school can still be seen). The project also includes parking areas on both ends. Alderman Aiken expressed his concern about the availability of parking on those ends and Manager Miera responded that they have had a couple engineers up on the Spring St/ Virginia Canyon Road side and there is room from three or four angled parking spaces which “is not enough.” He then described a possibility which would extend the Stairway trail behind the homes down to Spring Street across from the ‘T’ Lot. Alderwoman Johnson asked if they could use any funds from their Trails Plan for this stairway. Miera responded that there are some funds that are “uncommitted” for the Trails Plans. Either way, they will need additional funding from other partners.

Alderwoman Tinucci asked for an update on replacing the billboard that was blown down in recent storms on the Central City Parkway. Director of Public Works Sam Hoover responded that Yesco recently communicated with him that the removal and installation date is scheduled for June 7th. They are waiting for some parts and total project time is two to three days.

Alderwoman Laratta commented, “I think we’ve overlooked one of our resources.” She explained that she “was sitting outside under the sun the other day” and there was a family looking at the cross on the hill for the Catholic boy’s school. “It used to be a landmark,” she said, wrapped in little lights, and “it should be included in our Master Plan.”

Alderwoman Johnson responded, “I like that idea” to which Laratta said, “I’ve got a really long extension cord, I can run it up there.”

Mayor Fey commented that the Colorado Watercolor Society was in town for a Plein Aire event and their works will be on display at Washington Hall through the next week.

Mayor Fey opened the floor to the public for anyone who wished to speak to the council on any items not on the agenda. Joe Behm, Executive Director of the Business Improvement District addressed the Council saying, “The sound (over Zoom) was much better in the last 5 minutes of the meeting than in the last hour. I am looking forward very much to being there in person.

Mayor Fey adjourned the regular meeting at 8:06 pm. The next regular Council Meeting will be Tuesday, April 20, 2021.