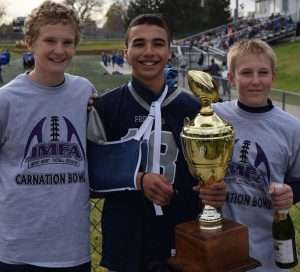 Blake Boulter, Nolan Lindberg, and Stephen King represent Gilpin County on the 8th grade Mountain Predators football team. The team is managed by Lisa Boulter of Gilpin County and has been coached by Jay Egger of Evergreen since the boys started playing football in the 2nd grade. Home fields and all practices have been located in Evergreen Colorado for the past seven years. This year’s 8th grade Predators entered the playoffs as the 3rd ranked team in the Jefferson Midget Football Association (JMFA) and, on Saturday, November 12, played the 1st ranked Lakewood Tigers for the Carnation Bowl championship.

On the first play of the 2nd quarter the Tigers ran the final seven yards to the right corner of the end zone for a TD. Following up with a field goal the Tigers pulled ahead with a score of 8 to 6. At the following kick off, the Predators return was stopped at its own 23-yard line. On the following 2nd down, the Predator QB, Stephen King (18), ran the ball up the center of the field to the Tiger 10 yard line for a 65-yard gain and a 1st down. On the Predator’s 2nd down King (18) completed a pass to McAnish (99) in the Tiger end zone for another Predator TD. Hartness (10) followed up with a field goal making the score Predators 14 to Tigers 8. Following the kick off, the Tigers returned the ball to their own 44-yard line. After completing one 1st and 10, on the their 3rd down, the Tigers ran up the middle where the ball was stripped by McAnish (99) and recovered by Blake Boulter (19) giving the Predators possession on their own 41-yard line. After completing three 1st and 10s on a 2nd down and with the ball on the Tiger’s 8-yard line, Shane McAnish carried the ball into the end zone on a left sweep.  Hartness (10) followed with another field goal putting the Predators ahead 22 to 8. At the kick off the Tigers return carrier was stopped at his own 27-yard line. Following a 1st and 10 to the Predators 44-yard line, the Tigers threw a 14 yard pass to the Predator 42-yard line where the Predator safety, King (18), hit the receiver causing him to drop the ball for an incomplete pass. On the play King (18) sustained a shoulder injury that kept him from playing the rest of the game. The Tigers followed with two 1st and 10s, but were unable to score before the game reached half time.

At the 2nd half kickoff the Predator receiver was stopped at his own 31-yard line. The Predators began the second half with their backup QB, Blake Boulter (19). After failing to make a 1st and 10 the Predators were forced to punt on their 4th down giving the Tigers possession on the Predator 45-yard line where the ball went out of bounds. After the completion of one Tiger 1st and 10, on the 2nd down the stadium lights went out and stayed out causing the game to be delayed until the next morning.

Last year our 7th grade team set a record as the 1st Mountain team to go undefeated and win the Carnation Bowl. This year’s 8th grade Mountain Predators set a new record as the first MAMFA team ever to win back-to-back championships. When asked for his thoughts, Coach Egger simply said “character builds championships.”  Although this year ends our Gilpin boys’ eligibility to play for MAMFA, they are eagerly looking forward to playing for the Gilpin High School football team next year. Congratulations Mountain Predators, 2016 Carnation Bowl champions!

END_OF_DOCUMENT_TOKEN_TO_BE_REPLACED

Benefitting the county, schools, and much more By Don Ireland   This year marks the 30th anniversary of casinos opening in the former little mining towns of Black Hawk, Central City and Cripple Creek, Colorado. In those early years, smoking was allowed inside ... END_OF_DOCUMENT_TOKEN_TO_BE_REPLACED