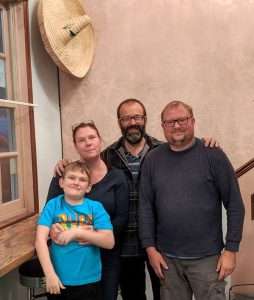 The Tinucci’s Spice Things Up

Joe and Kara Tinucci, owners of JKQ Barbeque catering, street food, and restaurant, are not finished sprinkling the love of food around town. Once again partnering with renowned Chef Chris Herrin, they are expanding the made-from-scratch food offerings in south Gilpin with the opening of Mountain City Cantina on East Lawrence Street inCentral City. In bright, baby blue paint, located near the base of Gregory Gulch and the Black Hawk city limits, the restaurant is nicely situated to take advantage of nearly 2,500 vehicles driving by each day. At the time of publishing, the target date for their soft opening is this weekend, October 25 through 27, with a Grand Opening most likely the week after Thanksgiving.

The desire of the gastronomical couple is to provide people with quality food that they want to eat, so when the opportunity to use the building at 430 Lawrence Street was presented, they salivated over the possibilities. The Tinucci’s and Chef Herrin go way back to the food truck beginnings in Las Vegas and they successfully collaborated on menus for the Opera crowd; and so, they tapped Herrin’s talent once more. Chef Chris observed that there was an increasing demand for Mexican food in the catering business of the area and suggested they tap into that desire. Once the fare was determined, there was only name considered; Mountain City Cantina. “It ties into the history of the area,” said Kara. The cantina faces the mountainside of the old mining town. Mountain City was founded along with the first gold strike in 1859 up from Gregory Gulch. The town was built on the mountain on graded terraces and boasted the first saloon and the first religious service in a Colorado mountain mining town. Due to lack of expansion space, the towns of Central City, Black Hawk, and Nevadaville eclipsed Mountain City and it was later annexed into Central City in 1880.

It is challenging for new businesses in the Central City and Black Hawk area to succeed, especially as tourism dies down through the winter. Joe and Kara have a more optimistic spin opening a restaurant as winter begins to gust in. Without high customer volume, this gives them a chance to finesse the menu, the space, and generate reputation. Their vision for the building is to use the second story for a speakeasy; however, their son has happily commandeered it for his own play area; only open to children age five and older.

The cantina will feature a short menu of mouth-watering entrees like tortas, a sombrero burger, tortilla soup, burritos, and of course, tacos. The Tinucci’s have had several tastings and have had great feedback. The brownie empanda; a fried pastry wrapped around chocolate browning filling topped with caramel and sprinkled with cinnamon sugar, is delicious. All the items are beautifully assembled and will make your taste buds dance. Chef Chris says they want to make good food, “nothing from a mix, we even make our own rice and beans.” The chicken is sourced from Redbird farms which prides themselves on being antibiotic free, hormone free, and cage free. The tortillas and chips are bought from Raquelitas Tortills which uses 100% wind energy. Roy Varela, the cantina’s next-door neighbor and realtor with Heritage West Realty, tested a burrito the prior evening and made a point to say, “The crust was heaven, the cheese inside, I was drooling.” He then attempted to quote “The Cow in Apple-Time” by Robert Frost mentioning how her (the cow’s) face was reflected upon us and drools a cider syrup. “It was delicious,” Varela exclaimed.

The tenacious couple has made quite an impact on the culinary scene around Gilpin County and beyond. Starting as a street vendor after first moving to the area, their cuisine was a popular and desired item for every event. They took their street show on the road to other venues such as Chatfield Farms and the Bread Bar in Silver Plume. They also cater and have provided edible delights for many organizations including the City of Central, the City of Black Hawk, Gilpin County, the Peak to Peak Chorale, the Peak to Peak Players, and other private groups for weddings and other celebrations. Opening JKQ BBQ Restaurant inside the Teller House has allowed them to have a true home base; and now they have the Mountain City Cantina to provide even more options to the hungry. When asked about a third restaurant, Joe groaned, but Kara said it is not out of the question, just not anytime soon. “We feel really strongly about being here for the customer,” said Kara, “We’re open to suggestions for menu items. We want to provide what people want to eat.”

“The Cow in Apple-Time” by Robert Frost

Something inspires the only cow of late

To make no more of a wall than an open gate,
And think no more of wall-builders than fools.
Her face is flecked with pomace and she drools
A cider syrup. Having tasted fruit,
She scorns a pasture withering to the root.
She runs from tree to tree where lie and sweeten.
The windfalls spiked with stubble and worm-eaten.
She leaves them bitten when she has to fly.
She bellows on a knoll against the sky.
Her udder shrivels and the milk goes dry.

END_OF_DOCUMENT_TOKEN_TO_BE_REPLACED

Benefitting the county, schools, and much more By Don Ireland   This year marks the 30th anniversary of casinos opening in the former little mining towns of Black Hawk, Central City and Cripple Creek, Colorado. In those early years, smoking was allowed inside ... END_OF_DOCUMENT_TOKEN_TO_BE_REPLACED