Monster Trucks rev up the fans 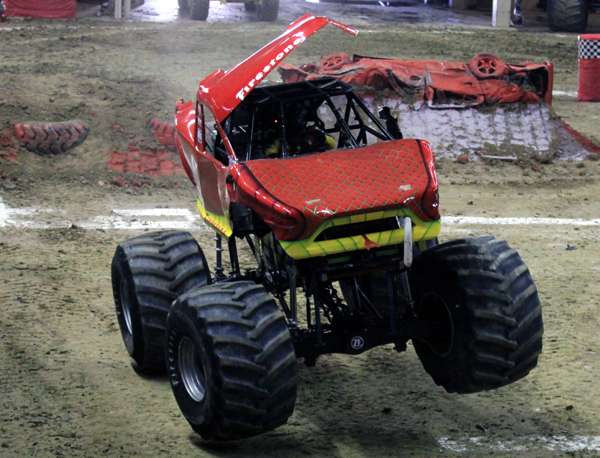 At the Budweiser Events Center

In what began as an off-road enthusiast’s obsession taken to the next level in the late 70s, monster trucks are now part of American consciousness and vernacular. The term “monster truck” was inspired by the wildly popular Bigfoot which crushed its first car in 1981. At first a curiosity, opening for bigger acts such as motocross races, cable TV and ESPN introduced the sport to a mass audience, and the rest is history.

Standing 12-feet tall and equipped with 66-inch high tires, methanol-burning supercharged 540ci Chevrolet or 572ci Ford engines that crank out 1,600 hp, 2-speed transmissions, custom built tubular chassis, four-link suspensions, hydraulic 4-wheel steering, and lightweight fiberglass bodies, a monster truck will never be confused with an F-150 hauling fence posts and hay bales around the farm. Seasoned spectators knew to insert their earplugs when the trucks roared around the course at the start of the show.

The Wheelie Contest got things rolling with competitors becoming airborne then landing on their oversized back tires. Usually the momentum carried them forward, but sometimes backward. Dirt Crew tipped back onto the top of its shell like a stranded turtle for the first of two times it would find itself in that position. Bigfoot caught big air, landed on one tire, paused vertically for what seemed like forever, and fell upright to all fours. Having won championships as the driver of Bigfoot every year since 2009, Larry Swim said that he couldn’t remember a wheelie quite like that one! Bigfoot won top honors in the wheelie category.

After intermission, the fire-breathing, car-crushing, metal-munching monster known as Megasaurus took the stage. With an extreme dislike of automobiles and an insatiable appetite for steel, Megasaurus promptly dispatched of its prey. The wonton destruction got fans revved up for the next round.

Freestyle is always a crowd favorite highlighted by bone-jarring, shock absorber-blowing, jumps and out of control maneuvers with maybe a few doughnuts added at the end of each run if time allowed. Snake Bite put in a thrilling performance, losing its roof from the force of repeated impacts. Quad Chaos was judged best of the day in Freestyle.

Head-to-head racing stoked the rpms in a single-loss elimination contest. Vinny Venom of Snake Bite left his adversary snake-bitten in the final heat with a win. Snake Bite was also named over-all winner and crowned 2017 Toughest Truck of the Year.

For more information go to: ToughestTruckTour.com.

END_OF_DOCUMENT_TOKEN_TO_BE_REPLACED

Where the dead get to tell their story By Jaclyn Schrock On Saturday, August 21, the Gilpin Historical Society held their annual Cemetery Crawl. Tickets allowed the shuttle of hundreds of guests from the Teller House parking lot to the Cemetery. Depending on v... END_OF_DOCUMENT_TOKEN_TO_BE_REPLACED

Where the dead get to tell their story By Jaclyn Schrock On Saturday, August 21, the Gilpin Historical Society held their annual Cemetery Crawl. Tickets allowed the shuttle of hundreds of guests from the Teller House parking lot to the Cemetery. Depending on v... END_OF_DOCUMENT_TOKEN_TO_BE_REPLACED