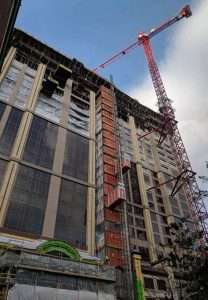 PRESS RELEASE – Monarch Casino Resort Spa celebrated a major construction milestone on Thursday, November 29: reaching its final height of 23 stories. To celebrate this historic achievement, Monarch Casino Resort Spa joined with the City of Black Hawk and PCL Construction to host a traditional topping off ceremony featuring a beam signing by all crew members. Attached to the beam, an evergreen tree covered in holiday lights was raised to the top of the building and visible to Black Hawk visitors as they enter the city on Highway 119.

The topping off ceremony featured lunch for the entire construction team and invited guests. Everyone had the opportunity to sign a structural beam that was hoisted to the top of the project at the conclusion of remarks by dignitaries including Black Hawk Mayor David Spellman, Monarch Director of Development Services Daniel Farahi, Chief Operating Officer David Farahi, and leadership from PCL Construction.

“Monarch Casino Resort Spa is raising the bar for quality and setting a new standard of excellence with this project,” said John Farahi, Co-Chairman and Chief Executive Officer of Monarch Casino & Resort, Inc. “There is no property with the standards of Monarch in the market today and we are proud to partner with the City of Black Hawk to achieve its goal of becoming a true resort destination.”

The construction of Monarch Casino’s new $400 million luxury resort hotel and spa has employed more than 2,000 locals over the past two years, and on any given day, there are more than 450 construction workers on site. Safety is a top priority for PCL Construction. Additionally, crews have performed more than 756,000 work-hours on the project to date.

“The topping off ceremony is a chance for the crew to take a quick break, acknowledge their hard work, and celebrate a job well – and safely – done,” says Matthew Meunier, Senior Project Manager for PCL Construction.

END_OF_DOCUMENT_TOKEN_TO_BE_REPLACED

Benefitting the county, schools, and much more By Don Ireland   This year marks the 30th anniversary of casinos opening in the former little mining towns of Black Hawk, Central City and Cripple Creek, Colorado. In those early years, smoking was allowed inside ... END_OF_DOCUMENT_TOKEN_TO_BE_REPLACED