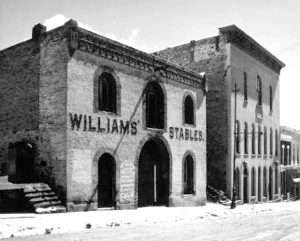 Sheriff Williams and Nevadaville in the 1880’s

“Bob Fallon, a miner of Nevadaville was on a periodical spree Monday and undertook to run the town of Nevadaville in the afternoon. He had a revolver and a very generous supply of whiskey, and was making considerable disturbance. After doing as he pleased at several saloons and public places, he ran the marshal out of town, overcome the remonstrance’s of the justice of the peace and the postmaster, broke in the doors and windows of several places and boasted that the officers, not even the far famed sheriff, Dick Williams, could arrest him. In fact he had things pretty much his own way. Someone sent word to Central to Sheriff Williams, who buckled on his armor of revolvers, courage and nerve and left for Nevadaville. He arrived in town just in time to see Fallon break in the door of Albro’s saloon. The sheriff dismounted and followed Fallon in the saloon, and immediately upon meeting him pulled his revolver and said, “Throw up your hands.” The sheriff had the drop on his man. Fallon threw up one hand and held the other on his breast as if to move for an inside pocket. The sheriff with his revolver leveled at Fallon’s head said, “Bob, if you move that hand I’ll shoot.”  Albro, the saloon man spoke up and said, “For God’s sake, Bob, throw up your hand.” Bob came to his senses and saw the position he was in and threw up his other hand, and the sheriff arrested him and handcuffed him and brought him to Central, where he was safely placed behind bars. In his right mind Bob Fallon meant no wrong. When sober he is not a bad man, but when drunk he has taught the people of Nevadaville to keep out of his way. Monday he was having his periodical spree, and he was going to run the town, officers or no officers, but he met his match in the never-failing Sheriff Dick Williams, who has never lacked the nerve to do his duty in the most hazardous and dangerous places.”

Sheriff Richard B. “Dick” Williams would have been known to people in both Nevadaville and Central City.  He lived and served in public offices in both towns. He and his family shaped the history of the two mining towns by leadership, law and order. Also Mr. Williams would start a stage coach service between Central City and Nevadaville. His livery service business became known as Williams Stables. More information on Mr. Williams can be found in Caroline Bancroft’s book, Gulch of Gold and Louis J. Carter’s book Yesterday was Another Day.

Here is an excerpt from Mr. Carter’s book, Yesterday Was Another Day, about Mr. Williams early accomplishments: “It was within the period from 1877 to 1896 that Richard B. “Dick” Williams was to become Mr. Gilpin County in politics, business, and sports. Historically and chronologically we find that in the years 1878 -1879 he was Trustee for the Town of Nevadaville, a First Lieutenant in the National Guard, and also Foreman in the Nevadaville Fire Department. In 1879 he and his father-in-law, John P. Bartle, established a stage line between Central City and Nevadaville and equipped it with a four horse drawn stage. This stage carried passengers, baggage, and parcels between the two towns. He was also nominated and elected as sheriff in 1879 and at the same time was operating a butcher shop in Nevadaville. In 1880 he was elected to the position of Assistant Chief of the Central City Fire Department.” Mr. Williams would become a famous sheriff of Central City, who lost his life trying to maintain law and order. He was the only person to have his funeral at the Central City Opera House, and mourners overflowed into the street.

END_OF_DOCUMENT_TOKEN_TO_BE_REPLACED

Where the dead get to tell their story By Jaclyn Schrock On Saturday, August 21, the Gilpin Historical Society held their annual Cemetery Crawl. Tickets allowed the shuttle of hundreds of guests from the Teller House parking lot to the Cemetery. Depending on v... END_OF_DOCUMENT_TOKEN_TO_BE_REPLACED