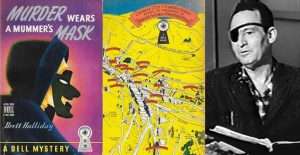 On November 24, 1939, the Weekly Register-Call reported that Mr. and Mrs. Davis Dresser had visited Central City to do some research in the files of the newspaper. Only a die-hard fan would have known that Davis Dresser was in fact one of the best-known mystery writers of his time. He wrote under several pseudonyms, including Asa Baker, Peter Shelley, Anderson Wayne, Matthew Blood, and Kathryn Culver. His most famous pseudonym, though, was Brett Halliday, the name under which he wrote the Michael Shayne mysteries.

Davis Dresser was born July 31, 1904 in Chicago, but most likely grew up in Texas. He lost an eye as a child in an accident involving barbed wire, and he wore an eye patch for the rest of his life. According to his version of his life, he dropped out of school and joined the army at 14. Discharged after two years, he returned to school but soon dropped out again and held a variety of jobs, including mule skinner, grave digger, farm hand, and on an oil tanker in Tampico, Mexico (where he reportedly met a man who inspired the Michael Shayne character). He eventually returned to Texas and earned a certificate in civil engineering from Tri-State College and worked as an engineer for several years.

Dresser claimed that his first novel was published in 1927, but his earliest known work is from 1934. For much of the 1930s he churned out romance novels for lending library publishers in the 1930s. The first Michael Shayne novel, Dividend on Death, was published by Henry Holt and Co. in 1939, under the pen name Brett Halliday. Dresser later claimed that it was rejected by twenty-one publishers before Holt took it.

Shayne was described as a tall, red-haired, wise-cracking, Irish-American detective. In Dividend on Death, Dresser described Shayne as “…a tall angular body that concealed a lot of solid weight, and his freckled cheeks were thin to gauntness. His rumpled hair was violent red, giving him a little boy look curiously in contrast with the harshness of his features. When he smiled, the harshness went out of his face and he didn’t look at all a hard-boiled private detective…” One biographer later wrote that Dresser’s “formula writing to create the Mike Shayne mysteries focused on hardboiled action blended with complicated plotting that focused on Whodunit, seasoned with a dash of humor.”

The Michael Shayne novels were immediately popular, and the Shayne character was in movies, radio and television. Several actors played Shayne in the radio series that ran from 1944 to 1953, including Jeff Chandler and Wally Maher. Lloyd Nolan played Shayne in six movies released by Twentieth Century Fox, while Hugh Beaumont (who would later gain as Ward Cleaver on “Leave it to Beaver”) played the character in six films from Producers Releasing Corporation. From 1961 to 1962, Richard Denning played Shayne on television on NBC.

Between 1939 and 1958, Dresser wrote fifty Michael Shayne novels, which were translated into dozens of languages. In all, there were seventy-seven Shayne novels and more than 300 short stories published. Although Dresser was in Central City in 1939 doing research, the city did not serve as a setting for a Michael Shayne novel until 1943, with the publication of the seventh book in the series, Murder Wears a Mummer’s Mask. Shayne and his new wife Phyllis visit Central City on their honeymoon during the Opera Festival, and their stops include the Teller House, the Opera House, the Chain O’Mines Hotel, and an illegal casino, and the bartender at the Teller House is named Pat Casey.

In the book, Mike and Phyllis investigate the murder of Screwloose Pete, a prospector who has finally found his big strike after spending years searching for it. His daughter, Nora Carson, happens to spot her father outside the Teller House just after he made his discovery. She has not seen him in many years, and she chases him through the crowd, only to find him murdered. Shayne and his wife agree to help the local sheriff and the Colorado State Patrol investigate the murder.

In 1958, with the novel Fit to Kill, Dresser stopped writing the Michael Shayne stories. He and his wife hired writers to produce the next twenty-seven novels under the Brett Halliday name. That same year, Dresser also started the Mike Shayne Mystery Magazine, which was published for nearly thirty years. In addition to his writing, Dresser edited several mystery anthologies and helped found the Mystery Writers of America.

Davis Dresser died in Santa Barbara, California on February 4, 1972. The last Michael Shayne novel, Win Some, Lose Some, was published four years later in 1976. The books remain popular, though, and the 2005 movie Kiss Kiss Bang Bang was based on his 1941 Bodies Are Where You Find Them.

END_OF_DOCUMENT_TOKEN_TO_BE_REPLACED

Benefitting the county, schools, and much more By Don Ireland   This year marks the 30th anniversary of casinos opening in the former little mining towns of Black Hawk, Central City and Cripple Creek, Colorado. In those early years, smoking was allowed inside ... END_OF_DOCUMENT_TOKEN_TO_BE_REPLACED

Benefitting the county, schools, and much more By Don Ireland   This year marks the 30th anniversary of casinos opening in the former little mining towns of Black Hawk, Central City and Cripple Creek, Colorado. In those early years, smoking was allowed inside ... END_OF_DOCUMENT_TOKEN_TO_BE_REPLACED