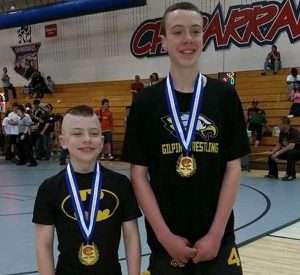 Athletes go on to compete in state tournament

Gilpin entered the regional tournament in Parker with four wrestlers: seventh graders Mike Wenholz, Mateo Maldonado, and Kian Lamer, and sixth grader Hunter Jackson. Sixth grader Gabriel Bergeson was unable to compete at regionals due to an illness, but Coach Clinton Wenholz acknowledged his tremendous effort and success during the season as a first-year wrestler.

Not only had wrestlers Wenholz, Maldonado, and Lamer competed on Gilpin’s middle school wrestling team, they had also been competing on the Gilpin County Youth Wrestling Team since October and have seen “tremendous success and improvement in their skills, thanks in large part to the outstanding coaching staff and … tournaments throughout the season in the Junior Metro Wrestling League,” Coach Wenholz noted.

Jackson entered the regional tournament as a first-year wrestler in the 135-pound weight class, unfortunately sustaining a broken thumb during his first match. That wasn’t enough to keep him out of the fight, though. Jackson wrestled his second and final match of the day with the broken thumb. Coach Wenholz stated his admiration. “Hunter Jackson showed what ‘true grit’ really is all about. He has the heart of a champion, and I’d be proud to have Hunter Jackson on my team any day.”

The top eight wrestlers in each weight class earned berths at the state tournament.

Although Mike Wenholz did not qualify for State last year, he entered this year’s regional tournament with a rekindled fire in his eye. Wenholz took fourth place in the 85-pound weight class and secured his spot at State.

Mateo Maldonado finished the day in fifth place in the 130-pound weight class, also securing his spot at State.

Kian Lamer earned eighth place in the 90-pound class and a spot at State as well.

Coach Wenholz also remarked, “None of the success the team has experienced this year would have been possible without the addition of Head Coach Diana Hernandez. Coach Hernandez came to us with an extensive background in wrestling, including at Bear Creek High School and the elite Brighton Bulldogs Wrestling Club.” He added that Hernandez brought a new level of intensity and passion to practice each day and also connected well with the Gilpin High School wrestlers and coaches.

All three young wrestlers competed at the annual Colorado Middle School Wrestling Championships last weekend, April 3-4, at the National Western Stock Show Event Center. They were cheered on by their teammates, friends, and family.

It was an honor to be in the prestigious event, and the teammates managed a couple of wins, but did not advance to the champion rounds. Mike Wenholz finished 1-2, beating an opponent that he lost to at regionals. Mateo Maldonado went 2-2, and Kian Lamer was stopped in the double elimination round without a win.

The coach reported, “The brackets were 64-man brackets with at least 45 kids in each weight class, so being able to get a win at state was a huge accomplishment for our young wrestlers, as the competition was extremely tough.”

END_OF_DOCUMENT_TOKEN_TO_BE_REPLACED

Where the dead get to tell their story By Jaclyn Schrock On Saturday, August 21, the Gilpin Historical Society held their annual Cemetery Crawl. Tickets allowed the shuttle of hundreds of guests from the Teller House parking lot to the Cemetery. Depending on v... END_OF_DOCUMENT_TOKEN_TO_BE_REPLACED