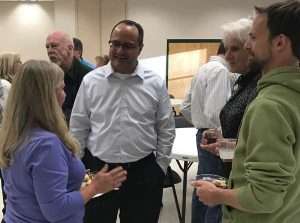 A good time was had by all during the reception at the Gilpin Rec. Center to welcome new Gilpin County Manager Abel Montoya. The gathering, on Wednesday, Oct. 3 from 5:30 – 7:00, included elected officials, county commissioners, department heads, and a number of local residents.All were there to chat about the news of the day while getting to know the newly hired County Manager and enjoy some tasty refreshments.

Much of Montoya’s career has involved Community Development and Planning. Born and raised in Denver’s Sloan’s Lake neighborhood, he attended private school through the 12th grade. He went on to study at CU in Boulder and CU Denver where he received his graduate degree in Urban & Regional Planning with a focus on Community and Economic Development. Early on Montoya worked with Denver Housing and Neighborhood Development Services, and in and around some of Denver’s poorest neighborhoods where he learned some of the challenges these areas face in getting needed amenities and services. He later became employed with Adams County where he remained for 16 years and held positions as Director in three different departments, two of which he himself created. Those included Planning & Development, Long Range & Strategic Planning, and Regional Affairs. As Director of Regional Affairs, he gained insight into what it takes to work with multiple cities and towns. He found it beneficial to figure out what these communities had in common and what interests and goals they shared to move forward in a positive direction. Bennett and Strasburg were a couple of those towns that he had the opportunity to work with on transportation, water, and agricultural issues.

His curiosity was immediately sparked upon learning of the position in Gilpin as he was already quite familiar with the county, as it is part of DRCOG’s (Denver Regional Council of Governments) eight county area which also includes Adams County. This organization, along with CCI (Colorado Counties Inc.) meet regularly to discuss areas of concern within their communities and in the case of CCI, Montoya was the Proxy for Adams County which allowed him to be a part of the discussions and involved in some of the State legislative issues regarding fire, environmental protection, and water conservation within Gilpin County.

“Happy and privileged” were two words Montoya used to describe his feelings of being chosen as County Manager.

Meeting with elected officials and touring the county facilities have made up much of his time since coming on board a month ago. The next 90 days are filled with many goals in mind. First and foremost are learning more specifics on where the community is, what is already being done that is working, and what improvements or areas of concern are out there that haven’t been addressed. Feedback from the community is very important to Montoya. He has a keen interest in planning long term and learning what the residents envision for their county in the future. Long-term goals aid the county in evaluating where tax dollars are being spent, and what opportunities for revenue may exist. Another goal he mentions is attending more community events such as the Rotary Club and Senior breakfasts. This would allow him to hear firsthand ideas or concerns from residents and be able to make suggestions to the board. His idea is to help create better working partnerships by sharing information and collaborating with each other to meet common objectives. Another important aspect to Montoya is working closely with each department director to better understand their needs and where he may be of assistance. Sometimes more than one department needs to be involved and requires coordinating and bringing those effected into the conversation. There is a Senior Team Leadership group that meets at least once a month and includes all elected officials and department heads. This provides another chance for everyone to discuss issues and share ideas. Their intention is to meet at different facilities around the county and thus further their knowledge of what different departments are working on and trying to accomplish.

Mr. Montoya says one of the most important things we can do as residents is to attend the Commissioner’s monthly meetings. These are for the people of the county to ask questions and voice their concerns. They are very effective in getting a conversation going about a particular issue and allows those involved to try and come up with a solution that works for everyone.

Abel Montoya has stepped into his new role with loads of enthusiasm, loyalty, and commitment. We welcome him to this special place we call home and wish him the best here.

END_OF_DOCUMENT_TOKEN_TO_BE_REPLACED

Where the dead get to tell their story By Jaclyn Schrock On Saturday, August 21, the Gilpin Historical Society held their annual Cemetery Crawl. Tickets allowed the shuttle of hundreds of guests from the Teller House parking lot to the Cemetery. Depending on v... END_OF_DOCUMENT_TOKEN_TO_BE_REPLACED