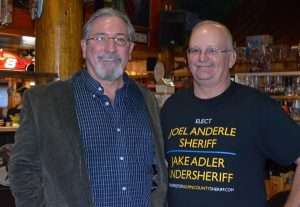 Roy’s Last Shot restaurant was the scene on a chilly Monday, October 8, for a meet-and-greet for Joel Anderle and Jerry Yocom. Anderle is running for Gilpin County Sheriff, and Yocom will be on the ballot as a candidate for Gilpin County Commissioner.Both men are running as unaffiliated. Restaurant patrons and supporters enjoyed a complimentary taco bar as they visited with the candidates about Gilpin County issues.

Joel Anderle has served the Gilpin County Sheriff’s Office (GCSO) for 30 years. He is a Colorado native, born in Denver. When he was a young child, his family moved to Kansas, but he spent his summers in Colorado. Anderle moved back to Gilpin County in 1980 and is the fourth generation in his family to call Gilpin home. He became a reserve police officer with the Central City Police Department in 1985 and a reserve deputy for GCSO in 1988. He was hired full time by GCSO in 1992 as a patrol deputy and was promoted to the rank of sergeant in 2008.

Anderle’s choice for undersheriff is Jake Adler, a life-long, generational Gilpin County resident. Adler is a career police officer with over 20 years of experience, including ten as a former police chief for the town of Nederland, where he made progressive changes and improved the department’s reputation. He is currently a police officer for the City of Black Hawk.

The GCSO is a large operation to oversee. There are more than 40 deputies and other employees connected with the GCSO, including those who work at the jail, investigators, dispatchers, and victim advocates. The department also provides police service to Central City, which closed down its police department in 2017.

Anderle listed several top priorities for the GCSO. One of his biggest desires is to get the deputies out into the community to attend meetings and events of all kinds so that the deputies and county residents can get to know one another.

“We are hearing citizens say ‘it’s us and you.’ I want people to know they don’t need to feel threatened by the deputies, and I want the deputies to be approachable and to understand that we have a lot of good people in Gilpin,” Anderle stated.

“We get a lot of complaints about motorcycles – speeding, passing, being loud. I have some ideas, including getting grants to help enforce speed laws. It won’t cure it all, but it will make an impact,” he explained.

Anderle had several thoughts about getting a shooting range in the county.

“If we can get a range built at a location to be determined, I’d like to see us put a building on it for training in safety and concealed carry. There could also be sales of ammunition and targets and a charge for use of the range, to generate income. If we do develop a range, the Forest Service would come in and do a closure for dispersed shooting. If we don’t, the Forest Service won’t impose such a closure.”

One positive aspect of Anderle’s tenure at GCSO is the good firearms training the deputies have received.

He also shared a negative impression that Gilpin gives pertaining to DUI’s, saying that recent data showed that per capita, Gilpin had 117 DUI arrests last year.

“We rank number one in the state, and that’s not good. But it’s mostly involving gaming patrons and not the locals.”

In fact, most law enforcement issues in Gilpin are related to gaming, but local problems include dog complaints, domestic disputes, traffic stops, and people who have warrants out for their arrest outside of the gaming industry.

The majority of Gilpin County Jail’s inmates are there on charges related to the gaming industry. Currently, Anderle said, there are about 60 in the jail. A helpful new procedure is that people who are arrested on DUI can now be released to a sober person instead of being jailed.

Anderle does not envision making a lot of changes at the GCSO. “Everything runs well the way it’s been going,” he noted. “We have a good group of people.”

Anderle himself is one of those people. He received a Medal of Valor from the GCSO a few years ago for risking his life in responding to a vehicle crash at Highway 72 and South Beaver, where a truck had gone into the creek during the spring snow runoff. Anderle worked his way through the creek to the truck and helped get its driver into an ambulance.

He definitely considers Gilpin County his home. “I love the county, and that’s why I’m doing this. I hope the citizens of Gilpin will vote for me. I will do my best.”

Supporter Margaret Lovell commented, “Joel and Jake are extremely honest and do the right thing.”

“I’m ready for a positive change in the sheriff’s office,” added Joline Logan. “Joel is everything about this community that has kept me here as a sixth-generation Gilpin resident.”

Jerry Yocom is running for Gilpin County Commissioner from District 2. He has 30 years of legal and law enforcement education and experience and is an adjunct professor at Regis University. He has resided in Gilpin County for 28 years, first coming to the community as a sheriff’s deputy. Yocom previously worked as a police officer, SWAT officer, academy instructor, and a site commander for an international security company. During the first days of gaming in Black Hawk, Yocom was hired by the City Council to create the Black Hawk Police Department.

“I have the ability to communicate with everyone,” he remarked. “I grew up in a blue-collar community in Iowa, and Gilpin is sort of like that small community. That’s one of the things that attracted me to Gilpin, along with the quality of its volunteer services.”

Yocom said he is not yet familiar with all of the issues that he would need to address as a commissioner. However, he does want to be careful with how future growth is allowed.

“I don’t want us to lose our identity as a small community with good, hard-working people,” he related. “I was here before the gambling came in. It brought jobs, and that’s important, too. The towns [of Black Hawk and Central City] are doing a good job.”

Yocom feels that it’s important to take good care of Gilpin County employees. He would extend opportunities for county employees to get good training and to feel good about how they are being treated, so they can gain from their experience. He would spend time with them and utilize their know-how, realizing that he can make better decisions that affect the employees when he knows what they are doing. He also wants to keep long-term employees around and to make sure that all employees are paid appropriately.

“Not that salaries and wages would be off the charts,” he explained, “because those are a huge part of the budget, but to give the opportunity for financial advancement so they don’t want to go to work outside the county.”

Yocom believes that a commissioner should always be on the job and be easily accessible to people. He doesn’t intend to make promises about what he will do, though.

“I can’t make promises, because there are two other commissioners to work with. We’d need to look at facts and alternatives and to check what other communities have done as we make decisions.”

Yocom, who ran unsuccessfully for sheriff eight years ago, confesses that he is not a politician.

“I’m a bad campaigner. I have a hard time going after anyone negatively. I just want to let the voters decide, and no hard feelings. I feel that I have the capacity to do a good job, but people should vote for whoever they think would be the best. If you believe that Bruce Hartman or Linda Isenhart can do the job best, vote for them.”

Gilpin can become “the gold standard for rural communities,” according to Yocom, by being active inside and outside the community.

“We can represent ourselves and be on boards and committees where we can be heard. We can make ourselves available and have something to say.”

Yocom has a vision for the big picture that includes the state of Colorado as well as the nation. He believes that Gilpin County can play a role in solving the atmosphere of divisiveness that has existed in our nation for years.

“We can set an example. Our country was founded on the principles of local government. If we want to be a voice, we need to use the voice we have. If it means going before the Colorado House or Senate to argue on behalf of a law that benefits us, we should stand and have our voice heard. It sounds idealistic, but that’s what I believe.”

Yocom may be contacted at jyocom0@gmail.com. Also see his Facebook page, Jerry Yocom for Commissioner.

END_OF_DOCUMENT_TOKEN_TO_BE_REPLACED

Where the dead get to tell their story By Jaclyn Schrock On Saturday, August 21, the Gilpin Historical Society held their annual Cemetery Crawl. Tickets allowed the shuttle of hundreds of guests from the Teller House parking lot to the Cemetery. Depending on v... END_OF_DOCUMENT_TOKEN_TO_BE_REPLACED

Benefitting the county, schools, and much more By Don Ireland   This year marks the 30th anniversary of casinos opening in the former little mining towns of Black Hawk, Central City and Cripple Creek, Colorado. In those early years, smoking was allowed inside ... END_OF_DOCUMENT_TOKEN_TO_BE_REPLACED