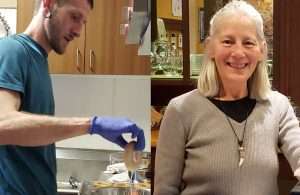 Mayor Willie’s offers handmade donuts and coffee, 7 a.m. to 1 p.m. daily, starting January 1, 2020, right in our own Central City. Some guess Mayor Willie’s to be a shadowed revival of the sweet shop next door fondly visited by many in Central City over a couple decades, recalling the 30 year mayor Bill Russell, Jr. But Mayor Willie’s at 125 Main Street is actually named for the popular mayor of Black Hawk, Bill Lorenz, who established the Black Forest Inn in Black Hawk back in 1958.

Wednesday was a busy donut devouring day at Mayor Willie’s. Central City made a “banner” grand opening day for the new business opening from Wednesday to Sunday. They are closed Monday, and reopen on Tuesday.

Many of us, with the New Year’s Day Grand Opening of Mayor Willie’s, made more than one visit to the new donut shop, to smile with friends between sips of hot coffee and bites of sweet cakes. Plenty of their boxes stuffed with fresh donuts to go walked out the door with us.

The Beightol’s had become recognized as great local food providers with the Burger Joint at 430 Lawrence St. in Central City. They had sold the wild game burger shop to new operators who failed at that endeavor last year. The Mexican restaurant on Lawrence St. is now operated by JKQ, as the Mountain City Cantina. JKQ started their first Central City BBQ restaurant last year with a fabulous menu of smoked meats when the Little Kingdom Room on first floor of the Teller House and Face on the Barroom Floor Bar became leasable.

We still see the sign “SWEETS” on the 2nd floor of what has become part of the Mercantile, formerly the Gilded Garter. During the 1960’s to 80s, the 125 Main Street location where Mayor Willie’s is established had been owned by Mayor Bill Russell.

Before Christmas 2019, Mayor Willie’s Moostang Gifts drew shoppers into the Man Cave to find original designs of gifts for all ages and interests, including Red Rocks Art. Tiffany and Brandon McGee filled the space vacated by photographer Milda Pfleghardt at her “Reliving The Past” studio this summer with treasured items.

Caught in awe by the views of Red Rocks Art, we eventually got to Mayor Willie’s grand opening upstairs. It was simply a coffee and donut thrill, not experienced by local shop owners in Central City for quite some time. There were interesting older and newer Gilpin characters coming, staying and eventually going on until about 3 p.m. on New Year’s Day.

Tables and chairs arranged near the band equipment in the front area by the window greeted you at the top of the stairs. We are all drawn to the 2nd floor nostalgic view of Main Street through the massive arched windows.

However, our purpose in being there called us toward the back. Against the stairwell an old bar with stools is set with delectable donuts, our goal.

Hot coffee or tea is made among the mirrored backwall of the bar. To the left is the tiny kitchen where the donuts are handmade. Across from the bar along a brick wall facing the bar are some small tables.

Robby Wicks of Eagle, CO played original and familiar artistically crafted rhythms and harmonies with his guitar and voice to celebrate this opening day of Mayor Willie’s.

Robby’s family is from Bakersfield CA, but grew up a military brat. Robby’s music has been influenced by a few sources. Mainly, we can hear old school county/western and folk music. Each set includes many of Wicks original songs. Familiar songs he sang included those favorites from Bob Dylan, Tom Waits, The Beatles, Hank Williams, Townes Van Zandt, George Jones, and more.

He has played in Denver and the Front Range with his band, the Robby Wicks Band. More recently he has played some solo sets like this one, while doing a residency in Beaver Creek for the 2020 ski season.

Robby met Dave and Karen a few years back in their Burger Joint. They invited him to play for the first time in Central City. Since then, he has played at the Teller House a few times, including Mayor Jeremy Fey’s inauguration party. He enjoys many friends in Central City.

Who is Mayor Willie?

Mayor Wilhelm “Bill” Lorenz was born in 1932 in Mainz, Germany. He served beer at age 7 in the three taverns his father owned. After he graduated from a three year apprenticeship with the Hotel La Central in French occupied Germany, he worked in other counties and hotels. Returning to Germany to work in a US military base, an American from Aurora, Colorado sponsored Bill as an immigrant in 1957.

Bill worked at the famous Brown Palace in Denver and became friends and partner with quality restaurant entrepreneurs. Claude Boettcher sent Bill as his personal representative for an opening of Opera Season in the early 1950s. That began his attraction to Gilpin County. He was able to continue working in Denver, but built the Black Forest Inn in Black Hawk in 1958. Soon, with his new wife Kay, they expanded their family and business for the next 40 years with a beer garden, seven dining rooms, and a casino. In year 2000 he closed his establishment in Black Hawk and opened his new Black Forest Restaurant a few months later in Nederland with his chef Alfred Arias – he was truly a Colorado landmark.

Besides Lorenz’s enterprises, he served on the City Council of Black Hawk for 18 years. He was also Justice of the Peace for two years and Black Hawk Mayor for six years.

Today, at Mayor Willie’s new traditions are realized from hard work and sacrifice.

END_OF_DOCUMENT_TOKEN_TO_BE_REPLACED

Benefitting the county, schools, and much more By Don Ireland   This year marks the 30th anniversary of casinos opening in the former little mining towns of Black Hawk, Central City and Cripple Creek, Colorado. In those early years, smoking was allowed inside ... END_OF_DOCUMENT_TOKEN_TO_BE_REPLACED