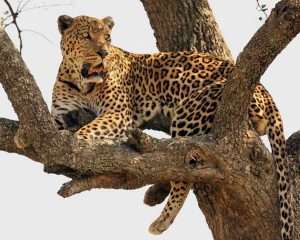 In memory of Sammy

A herd of Thompson’s gazelle (or Tommie) round a bend in the forest and nears the water’s edge. Cautiously at first, the lead gazelle gently dips its head for a drink. The crocodiles start to waggle upstream in a sinister jockeying for position. The gazelle jerks its head to the upright position seemingly aware that something is amiss. The rest of the herd skitters back into the woods, only to shortly reappear. At once, the foremost gazelle, with its dedicated disciples in tow, decides to make a go of it. A dozen crocodiles edge calculatedly within striking distance as he reaches midstream. In a burst of unbridled fury,a crocodile lunges at a Tommie who barely escapes with his life, as he bounds toward the opposite shore. The next in line wouldn’t be so fortunate! In an instant another croc grabs a hapless gazelle by the neck. As he gives what would ultimately turn out to be a pathetic, futile struggle, his jet black eyes stare blankly into space. The antelope are frenetic now. You would think that after seeing their compatriot mercilessly mowed down that they would turn around and try to cross somewhere else, but regrettably for a few, instinct drives them forward. One after another, eight Thompson’s gazelle are systematically slain, some swallowed whole after a few chomps, and others ripped to pieces by groups of crocs. The gruesome sound of bones being snapped like sticks is one I’ll never forget! The remaining gazelles, with their ranks in disarray, finally get the hint and abandon their crossing attempt.

It was twelve years ago during my first trip to Africa when I witnessed the crocodiles taking Thompson’s gazelle on the Mara River, and is one of the experiences that got me hooked on safaris. Many safaris later, I was to return to the Masai Mara for the third time and staying at my favorite camp: Kichwa Tembo. Electricity has come to the Mara and what was a perfectly nice permanent tented camp with great food and great people has been rebuilt into a luxury camp with great food and great people. With exceptional game viewing included, it remains one of the best-priced values in Africa. I was hoping to see some of the same people that I had met on my second visit eight years prior. The one I looked forward to seeing most was Sammy the butler (waiter) with whom I shared a special rapport. Sammy seemed amused at the quantity of milk I drank, so my order of maziwa kumba with barafu (large milk with ice) was a running joke. Sadly, Sammy had passed on, but his son works as a bartender at Kichwa Tembo and is Sammy’s spitting image. With my Swahili coming back to me not quite as well as I thought, I ordered a maji moto with barafu (hot water with ice) from Sammy’s son to which he dutifully obliged. This too became a running joke. Manager James was a familiar friendly face that upgraded my tent for the last two nights. A South African couple slated to share my game drives with me wanted to return to camp for breakfast at 9:30 a.m., so at reception I requested other arrangements. I was given a private vehicle for six days and reunited with my trusty guide Benedict.

Upon landing and being greeted, I was driven to a pride of seventeen lions near the airstrip. A male with a dark brown mane slept next to a partially consumed warthog stashed in a bush. There are about six hundred lions in the park and we would see about thirty-five of them. Black-backed jackals liked to harass the topi who drove them away with their horns and Thompson’s gazelle sparred playfully. With viewing Cape buffalo come their flies, so attempts to capture a picture of one with an oxpecker on its horn were short-lived. A topi was about to cross a dry gully, an obvious ambush point, but the two male lions in the vicinity paid no interest since they were busy servicing a nearby female. It was the closest I’ve ever come to a lion with both males passing six inches from the side of the open-sided vehicle. Part of the park was set on fire to encourage new growth and had flushed a male leopard. He sprang up a tree then rested on a horizontal branch to scan for prey. After posing for photos, he leapt down and was off on a hunt. Two hyenas slinked near a lion kill patiently waiting their turn at the carcass; the hyenas knew that the lions would soon seek shade for a nap and they could feed freely on the leftovers. Passing a recognizable spot, I reminded Benedict how a baby hyena used to always approach our vehicle there and said it was because the hyena liked him. He then turned his head to look at me, smiled, and wagged his finger in the air at having almost forgotten a fond memory. Benedict also recalled our time on a cheetah kill near camp. A good guide knows the animals’ habits and Benedict knew that the hippos start yawning at 5 p.m. Sitting on the riverbank on a blanket-covered cooler filled with chilled beverages, the hippos performed on cue with many a shot of gaping mouths and teeth. Zebras began filtering down to the river and were thinking about crossing. In plain sight, crocodiles swam in the water in wait while the zebras considered their plan. If the primitive-brained crocs would sit still next to a rock, the zebras would never see them and the crocodiles could eat all they wanted. As it was, their methods have worked for millions of years and when the migrations occur they will feast. A replay of my first safari was about to unfold when the zebras turned tail and left in search of a safer crossing point.

Cheetahs were the only animal on my list that I hadn’t seen until then so we headed to where some had been sighted the night before. Kneeling on the passenger seat with binoculars in hand surveying the tall grass, Benedict loudly declared, “Cheetah!” Racing back to the main road and then off-road, we caught up with them. Topis kept a nervous eye on the cheetahs and a lone Thompson’s gazelle made sure to maintain a good space between them. The cheetahs moved toward a herd of Grant’s gazelle in the distance that was unaware of their presence. As the cats disappeared over a hill, we were afraid the wind direction would betray the cheetahs’ location when the group of gazelle spooked. The reason for their alarm was apparent when we pulled up on the cheetah with a young Thomson’s gazelle in its jaws. After consuming part of the meat, she called out for her cub to join her.

END_OF_DOCUMENT_TOKEN_TO_BE_REPLACED

Benefitting the county, schools, and much more By Don Ireland   This year marks the 30th anniversary of casinos opening in the former little mining towns of Black Hawk, Central City and Cripple Creek, Colorado. In those early years, smoking was allowed inside ... END_OF_DOCUMENT_TOKEN_TO_BE_REPLACED

Benefitting the county, schools, and much more By Don Ireland   This year marks the 30th anniversary of casinos opening in the former little mining towns of Black Hawk, Central City and Cripple Creek, Colorado. In those early years, smoking was allowed inside ... END_OF_DOCUMENT_TOKEN_TO_BE_REPLACED