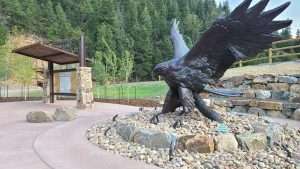 Black Hawk to be lit up for Christmas

Highlights of the September 9, 2020 Black Hawk City Council Regular online meeting includes approval of the 2021 Operating Plan, a revision to the Maryland Mountain Trail Contract, and a sign permit amendment.

City Attorney Hoffmann asked Council to declare any Conflicts of Interest on any issue appearing on the agenda other than those already disclosed and filed with the City Clerk and Secretary of State. There were no objections from the City Council or from anyone online.

Black Hawk City Council approved the meeting minutes from the August 26, 2020 Regular Meeting with no corrections or amendments.

CB25, An Ordinance Amending Section 15-11 of the Black Hawk Municipal Code to Amend the Sign Permit Section of the City’s Sign Code.

The City of Black Hawk has identified the need to update portions of the Municipal Code within Chapter 15 (Sign Code). The proposed amendment requires that signs installed on City property be reviewed and approved in accordance with Sec. 16-368 – City Council Design Review and Compatibility process, and are not required to be included in a Comprehensive Sign Plan. This amendment will allow for installations on City property that may consist of signage, including monuments, sculptures, trail signs, historic tourism signs, and other installations on City property. Black Hawk Council approved CB 25/ Ordinance 25-2020 unanimously

Resolution 60-2020 which is a  Resolution Approving Change Order #1 to the Maryland Mountain Trail System Contract in the Amount of $30,000 for Establishment of Trail Corridors.

When the Maryland Mountain Trail System project was put out to bid, it was advertised that all trail corridors (except one) had been marked in the field, and the contractor would simply need to follow the flagging and establish a trail within 50’ or so of all markings. However, the trail corridors were not marked to this level of accuracy. Some trails were not marked at all, and some marked trails were unworkable due to steep terrain, rock outcroppings, or other natural obstacles. Therefore, the contractor was required to first establish a corridor for each trail, and then narrow down the corridor until a workable trail could be constructed. The step of establishing the original trail corridors is outside of the contractual scope. Therefore, the contractor has kept track of the hours expended to establish these corridors, and they have estimated additional hours necessary to perform this work on the final few trails. The total amount of time was determined to be 400 man-hours at a rate of $75 per man-hour. Black City Council unanimously approved Resolution 60-2020.

Mayor Spellman was pleased to announce that Black Hawk casinos agreed to the costs for the Christmas lighting in the city. Where it was once thought that Black Hawk was not going to be dressed up for the upcoming Holiday season, that has changed. Now we can enjoy the spectacular lighting the City has been known for during the Holiday season. Thank you, casinos, and thank you Mayor Spellman for pursuing this effort.

City Attorney Corey Hoffmann had no items except a recommendation that Council move into Executive Session; motion carried.

The next Black Hawk City Council regular meeting will be held on September 23, 2020 at 3:00 pm online. For more information visit www.cityofblackhawk.org.

END_OF_DOCUMENT_TOKEN_TO_BE_REPLACED

Benefitting the county, schools, and much more By Don Ireland   This year marks the 30th anniversary of casinos opening in the former little mining towns of Black Hawk, Central City and Cripple Creek, Colorado. In those early years, smoking was allowed inside ... END_OF_DOCUMENT_TOKEN_TO_BE_REPLACED