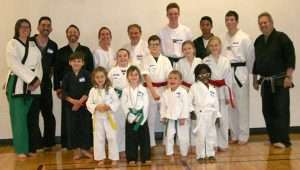 At the Gilpin Community Center

Starting off the tournament was a very exciting demonstration with many of the black belts and several red belts participating. With an amazing mix of good old rock and roll playing in the background, Grand Master Rankin cut in half four potatoes with his sword, held in the palms of two of his very trusting students. Several of Grand Master Rankins students and Master Bishops students performed the cane move for the audience. Ms. Rains and Mrs. Rich then placed patio stones onto the abdomen of two students, and then Mrs. Rich broke the patio stones into several pieces with a sledge hammer. Many of the red and black belts finished the demonstration with some creative free form one step, which is techniques that are done with a partner, one attacking the other, and can be done empty handed (no weapon) or with a weapon.

The littlest members, 4 to 6 year olds, participated in an obstacle course and sumo wrestling. The most interesting part of the tournament had to be the creative forms and creative weapons forms. This is an opportunity for the students to showcase their creativity. The competitors even came up with some fun names for many of these forms. We were lucky to have so many black belt judges in attendance, to help with scoring, there were many scores that were tied. At the end of the tournament the black belts voted for the best in show, which only goes to the one student who shows the most sportsmen like conduct and participates in as many competitions as possible. Sydney Skifstrom, from the Lakewood class, was the lucky winner of this prize, which was a full sized decorative sword and stand.

The winners were as follows:

Forms for the older kids: Sydney Skifstrom 1st place, Rowan Moles 2nd place, and Willow Moles 3rd place. This group had to do 2 forms because there were so many tied scores on the first set of forms the judges could not come to an agreement.

Creative Forms: All of the scores in this division were very close. Gryphin Kramer 1st place with “The Upside-down T,” 2nd was a tie with Rowan Moles performing “The Wheel,” which included two cartwheels and Nelson Long-Pearce performing “The Alley.” 3rd place went to Willow Moles for her creative handstand during “The Willow Tree.” We have to mention that Erin Schwettman also performed a creative form that was called “The Surprise after Form.”

The sparring competition was a minute and a half long match. No kicks to the head, unless you are a red or a black belt, and the person you are sparring is a red or black belt. Scoring is to the core, kidneys and upper thighs. Judges also watch for excessive contact and going out of bounds.

The most exciting sparring of the day was during the black belt matches: Isaac Hoffer in 1st place, Matt Vergano 2nd place, and Martin Prchal in 3rd place.

The wood breaking division is done with 1 to 5 pine boards cut at 1” x 12” x 8,” except the Kinder Kickers get 1” x 12” x 4.” There are only a couple rules that the students need to follow. Punches, if you are under the age of 16 must be done with a hand pad on. No speed breaks or power breaks, unless your instructor preapproves it.

After a combined effort from everyone, including bystanders we cleaned up and then had a relaxing potluck in the multi-purpose room.

Many thanks to all the participants, parents, instructors, Gilpin Community Center employees for the success of this event, and even my mother, Marilyn Ayala for her help getting people signed in.

END_OF_DOCUMENT_TOKEN_TO_BE_REPLACED

Benefitting the county, schools, and much more By Don Ireland   This year marks the 30th anniversary of casinos opening in the former little mining towns of Black Hawk, Central City and Cripple Creek, Colorado. In those early years, smoking was allowed inside ... END_OF_DOCUMENT_TOKEN_TO_BE_REPLACED

Where the dead get to tell their story By Jaclyn Schrock On Saturday, August 21, the Gilpin Historical Society held their annual Cemetery Crawl. Tickets allowed the shuttle of hundreds of guests from the Teller House parking lot to the Cemetery. Depending on v... END_OF_DOCUMENT_TOKEN_TO_BE_REPLACED