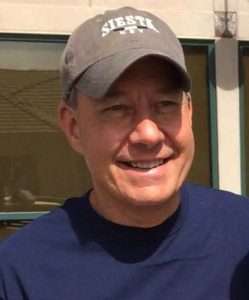 Mark, as he was known by, was born and raised in Black Hawk, Colorado, the second child of William David and Dolores Marie Spellman. Mark was the middle child with his sister, Sandy, the oldest; and, brother, David, the youngest. Mark was a gentle soul who enjoyed his youth with full abundance. What follows is but a glimpse into the breadth of his life.

As a child, Sandy and Mark had combined birthday parties since their birthdays were just a day apart. Most of the kids attending were relatives with one close friend thrown in, Kevin Wright. As Mark grew up, he enjoyed riding dirt bikes with Kevin and his cousin, John Blake. Mark became a talented motorcycle rider, as once in a while he had the added challenge of allowing his younger brother to ride on the back while still keeping up with the other two. A few years later when David had his own dirt bike, and after being schooled by his older brother, the two would pack lunches and take off for the entire day riding the backcountry of Gilpin County.

Some of Mark’s best childhood memories were of being with his grandfather, Otto O. Blake. Whether it was going to the trash dump on Saturdays, being with him at his second-hand junk shop, Treasures and Trash, or being taught to drive (before he was legally old enough), Mark inherited a strong work ethic from his grandfather.

Mark’s first job was mowing lawns in Black Hawk and Central City. His sister, Sandy, would go along to help, but claims Mark never shared his earnings with her. When pressed on this, Sandy acknowledged that maybe she was there to sunbathe more than to help cut the grass.

Upon getting his driver’s license, Mark went to work for Phil and Ruth Schmalz parking cars and working in their Rock Shop in Central City. This is where he met the young girl that would become the love of his life, CinDee Schmalz. After both had graduated high school, they would eventually date and with much persistence and endurance on Mark’s part, CinDee gave him the answer he was looking for, and they were married on September 24, 1983. Their wedding day was a joyous and fun-filled event with Gale (Moose) Moore as Mark’s best man and Kevin, John, and David being his groomsmen. With the assistance of Moose and Kevin, John and David pulled off the old Catholic wedding gag of placing “Help Me” in white tape on the bottom of Mark’s shoes (there is a lot of kneeling during Catholic weddings). Mark noticed this before the ceremony and thought he should remove the tape for fear it would upset his mother, but his mother said, “you leave that tape on there” for truth be known, she secretly was in on it. The first time Mark knelt, the assembled guests broke out into laughter. As she was getting in the van to head to the church CinDee realized she hadn’t brushed her teeth, of all times to forget! She gathered her dress and ran back upstairs, with the photographer on her heels and after a picture was snapped documenting, she was now ready to be kissed. Her bridesmaids just shook their heads and laughed. With over 300 in attendance it’s safe to say the celebration went way into the night. They thoroughly enjoyed their honeymoon in Jamaica and settled down to spend their married life in Central City.

CinDee and Mark enjoyed their years together before children, traveling to Mexico every year as well as road trips throughout the state, always stopping to look at, take a picture of and/or talk to fellow firefighters at their stations.

And then there were three. When Valerie Michelle was born, there were many fearful moments as she struggled to take her first breath, yet as God would have it she proved to be a powerful warrior, just like her Dad. Just when you think you cannot love enough, God gave them Megan Kaleen. The family was complete. There was nothing Mark wouldn’t do for his girls. Although he struggled with health issues, not once in his life did he let them down, not once. Every soccer, softball, volleyball and basketball game, every band concert, play, graduation, class party, field day, open house and dance he was there. He was a constant on the volleyball courts as he shagged the balls for the girls during warm up. He loved including them as he built his gardens and his walls. Then came the motorhome and a whole new world opened up for all of them. There were never happier times than when they were at the lake. Rarely were there just the four of them as friends and family always would join them and make themselves at home around the water. These times truly bring back the best memories, the traveling, the music, the food, the laughter, the girls – all of them, and especially the peace that the water gave. Yes, they were the best of times. Mark never thought twice about blessing them with these trips. When it came time for college, both Mark and CinDee had a hard time as parents with the “giving them wings” process. The love and bonds run deep, yet watching them grow and experience life is a parent’s greatest blessing. Then came the weddings of which Mark proudly walked both of his daughters down the aisle along with dancing with each of them. They brought him such joy!

Again, when you think you cannot love enough, God blesses you with grandchildren. When Kadence Tipharah Kelly came into this world, Poppa was there. The sparkle in his eye as well as a smile returned every single time he saw this precious one. They both just lit up when they looked at each other. Kadence will know beyond a shadow of a doubt that her Poppa loved her so incredibly much and he will guide her with his warrior spirit all the days of her life.

While his daughters were the pride and joy of his life, his passion in life and career calling was to be a Fireman. Mark started his firefighting career as a young volunteer on the Black Hawk Volunteer Department and at the age of 18 was elected as the Fire Chief of the Department. He was the youngest Fire Chief in the history of the City of Black Hawk, and it is entirely likely, in the history of the State of Colorado. He held this title for 15 years from 1976 to 1991. Mark wanted to be a professional firefighter, and in 1976 his dad was able to secure Mark a spot in the Cadet Firefighter Program with the City of Westminster Fire Department. As Mark went from a cadet to a firefighter and ultimately a Lieutenant, the same confidence that the Black Hawk firefighters had in Mark to make him their Chief at such a young age, was recognized by his fellow firefighters in Westminster. Mark was held in high esteem by fellow firefighters as a good friend, mentor, and colleague. He set remarkable examples both professionally and personally. Mark’s firefighting career was cut short when his health required him to take an early retirement. After 30 years with the Westminster Fire Department, it was emotionally crushing for Mark to leave the career he loved, as well as his brother firefighters that he loved just as much. He was never able to fully reconcile leaving this part of his life behind.

Mark also was quite handy in construction. The Spellman brothers built and owned, with their parents, the Little Giant Car Wash in Black Hawk which was located at the bottom of Chase Street. On the days when they poured and finished concrete, Mark and David would take the crew that helped to Crook’s Palace for lunch and drink beer for the rest of the afternoon, which actually could go well into the evening and on occasion early into the next morning. Mark loved the daily job of maintaining the car wash, even in the freezing winter months when he and David would have to pull out the hair dryers to thaw frozen lines. When Mark wasn’t scheduled to work as a firefighter, he helped his brother with his construction company. The two built Mark and CinDee’s family home in Central City.

Mark loved his Mom and Dad with all his heart, and although in recent years he was not able to do as much for them as he wanted, they and he cherished every moment they had together.

All of Mark’s life was ensconced in his enduring and deep spiritual faith. Whether in his early years as an altar boy at St. Mary’s of the Assumption Catholic Church, or attending and volunteering at Flatirons Community Church, Mark looked to the Lord for guidance and comfort in his life. He would often read and study Bible verses that his dad, who was an ordained Deacon in the Catholic Church, selected which he felt had a particular relevance and meaning to Mark’s life. As Mark’s struggle continued, his walk with the Lord deepened. It’s not to say he didn’t question God’s ways, but more importantly he learned to trust God’s ways. He and CinDee spent hour upon hour in scripture and in prayer and thanksgiving for the blessings they had been given. Their beautiful daughters have that same deep abiding faith and trust in Him.

Our family is so grateful for the outpouring of love and respect for Mark. Our hearts are overwhelmed with the support of our precious friends and families. God bless and keep you always.

“Be strong and courageous. Do not be afraid; do not be discouraged, for the Lord your God will be with you wherever you go.” Joshua 1:9

Condolences can be left at www.horancares.com as Horan & McConaty are handling the arrangements.

Services will be held at Flatirons Community Church West Campus 24887 Genesee Trail Road, Golden, CO 80401 on October 4th, 2017 at 10 am. A celebration of Mark’s life will be held at Valerie and John’s Pallat’s home 5865 W. 3rd Place, Lakewood, CO 80226 immediately following the service.

END_OF_DOCUMENT_TOKEN_TO_BE_REPLACED

Benefitting the county, schools, and much more By Don Ireland   This year marks the 30th anniversary of casinos opening in the former little mining towns of Black Hawk, Central City and Cripple Creek, Colorado. In those early years, smoking was allowed inside ... END_OF_DOCUMENT_TOKEN_TO_BE_REPLACED

Benefitting the county, schools, and much more By Don Ireland   This year marks the 30th anniversary of casinos opening in the former little mining towns of Black Hawk, Central City and Cripple Creek, Colorado. In those early years, smoking was allowed inside ... END_OF_DOCUMENT_TOKEN_TO_BE_REPLACED