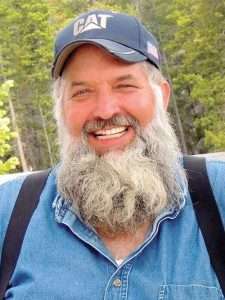 Mark Steven Smith of Nederland passed away of cancer at the Boulder Community Hospital on February 10, 2019. He was born on June 17, 1956, to Micheal B. Smith and Jeannette McDonald Smith.
He attended Nederland High School and was a Boulder County Road Supervisor. Mark was raised in Nederland, the second oldest son of the Smith family, son of a miner, and brother to two sisters and three brothers.
He married Ressa Lively Smith on August 27, 1985, at Mark’s grandmother’s house on West First Street.
His special interests were people, and building and maintaining roads. The family said, “Mark was an amazing son, brother, and husband, and a true and dear friend to so many – a man with a heart of gold who never turned down anyone in need.”
Survivors include his mother and father, his wife, her children and her children’s children, all his siblings, their spouses and significant others, their children and their children’s children as well as the Nederland community.
According to an article in the Mountain-Ear on July 6, 2016, in 1974 when Mark was 17, three days after graduating from Nederland High School, he went to work for Boulder County. On June 19, 2016, co-workers, friends and families gathered at Mark and Ressa’s home on Magnolia to congratulate Mark on his retirement, after 42 years of making sure the Boulder County roads were accessible and safe.
Putting the word “retirement” and Mark Smith in the same sentence is an oxymoron. He didn’t know how to not be active. His mother Jeanette Smith said that from the day he was born, he would greet the day at 5:30 a.m. with a big grin on his face and kicking as if to say, “C’mon, let’s get going, let’s do something.”
Not only did he work for the county, but he also started his own business, the Antique Excavation Co., and bought an old Allis Chalmers, a grader, and a dump truck to assist his Nederland neighbors with their building projects. It wasn’t long before Mark was the superintendent of the county’s mountain road crew.
In the mountain area, he was the guy people would call when something was wrong with their road, with drainage issues, with their eroded driveways, or with four feet of snow on the ground. Mark had the equipment and the expertise to do whatever needed to be done, even though it was sometimes 3 a.m. when the call came in.
When the Black Tiger Fire exploded, raging into the Sugarloaf residential area taking home after home, Mark was sent to the west edge with his D-7 Dozer to do structure defense by digging lines around houses to save them from being consumed by the wind-driven flames.
After the 2013 flood, Mark was among the team of excavators who dug out Jamestown and Lyons and carved access roads to places buried in debris or cut off from county roads.
On Saturday, February 16 at 11 a.m., friends and family celebrated the life of Mark with a heavy equipment parade in downtown Nederland. At 1 p.m., there was a Memorial Service at Saint Rita’s Catholic Church, followed by a Celebration of Life at 3 p.m. held at the Nederland Community Center.

Contributions can be made in his honor to the Nederland Food Pantry.

END_OF_DOCUMENT_TOKEN_TO_BE_REPLACED

Benefitting the county, schools, and much more By Don Ireland   This year marks the 30th anniversary of casinos opening in the former little mining towns of Black Hawk, Central City and Cripple Creek, Colorado. In those early years, smoking was allowed inside ... END_OF_DOCUMENT_TOKEN_TO_BE_REPLACED

Benefitting the county, schools, and much more By Don Ireland   This year marks the 30th anniversary of casinos opening in the former little mining towns of Black Hawk, Central City and Cripple Creek, Colorado. In those early years, smoking was allowed inside ... END_OF_DOCUMENT_TOKEN_TO_BE_REPLACED