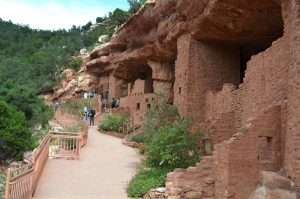 Visitors are encouraged to touch the past near Colorado Springs

I wanted to become an archeologist when I grew up. Then I found out it entailed digging in the dirt under the hot sun, and that dimmed my enthusiasm for that profession. Plus, I had trouble spelling “archeology.” However, I still enjoy learning about what others have dug up or discovered and was fascinated to tour the Manitou Cliff Dwellings on a little mini-vacation my family took to the Colorado Springs area a few weeks ago.

The Manitou Cliff Dwellings overlook the town of Manitou Springs at 10 Cliff Road, five miles west of Colorado Springs off Highway 24. It’s open seven days a week, weather permitting, so give it a try before the snow flies.

The Manitou Cliff Dwellings of the Anasazi Indians were built under a protective red sandstone overhang more than 700 years ago and were first opened to the public in 1907 so that the public could see and learn about their culture during self-guided tours. Even though this site is a rare historical treasure, people are allowed to explore inside the dwellings and even touch the sandstone walls. You can walk around or through nearly all of the rooms. But watch your head and suck in your gut! The Anasazi must have been a small people; corridors are narrow, rooms are tiny, and doorways are low.

The mysterious Anasazis roamed the Four Corners area of the Southwest from 1200 B.C. to 1300 A.D. They left little writing about their culture, except for pictographs and petroglyphs on rock walls. There are many theories about why these Ancient Ones left their cliff dwellings and stone pueblos. Most scientists think they were either starved out or forced out. A severe drought from 1275 to 1300 A.D. may have been a factor, or an enemy may have forced them to flee. There is also evidence that the Ancient Ones may have evacuated the dwellings over a time period of about a hundred years and joined what are now Hopi and Zuni communities in Arizona and New Mexico.

A three-story pueblo below the Cliff Dwellings houses the museum and gift shop. This structure was built as a copy of the architecture of the Pueblo Indians, who are descendants of the Anasazi. The first six rooms of the Pueblo were built in 1898, and it has been expanded three times since then. Until 1984, it was occupied by Native Americans.

In the museum, visitors may view dioramas depicting the daily life of the Anasazi and exhibits of tools, weapons, and pottery. The gift shop contains everything a tourist could want: educational books or DVDs, hand-made Native American jewelry, reproductions of artifacts, pottery, or crafts, and Southwestern music and decor.

If you work up an appetite while squeezing through the cliff dwelling openings or browsing in the gift shop, there is also a snack bar and a picnic patio.

Of course, folks at the Cliff Dwellings have students in mind, with educational tours for kids in kindergarten through fifth grade to learn about the Anasazi culture, including how they farmed and hunted. A guided tour includes hands-on corn grinding with mano and metate stones, museum exploration, a movie about cliff dwellers, experience of Native American artifacts, and personalized pottery painting.

END_OF_DOCUMENT_TOKEN_TO_BE_REPLACED

Where the dead get to tell their story By Jaclyn Schrock On Saturday, August 21, the Gilpin Historical Society held their annual Cemetery Crawl. Tickets allowed the shuttle of hundreds of guests from the Teller House parking lot to the Cemetery. Depending on v... END_OF_DOCUMENT_TOKEN_TO_BE_REPLACED

Benefitting the county, schools, and much more By Don Ireland   This year marks the 30th anniversary of casinos opening in the former little mining towns of Black Hawk, Central City and Cripple Creek, Colorado. In those early years, smoking was allowed inside ... END_OF_DOCUMENT_TOKEN_TO_BE_REPLACED