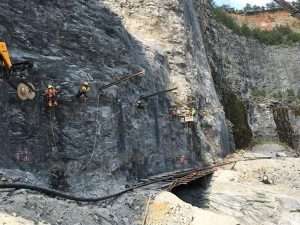 PRESS RELEASE – On Tuesday afternoon of March 20th, a contract employee working on a rockfall mitigation project in Clear Creek Canyon was killed after falling nearly 70 feet. Both directions of the highway were closed after the accident which occurred early afternoon on Highway 6 south and east of Black Hawk.

The victim was identified as 39-year-old Jaime Sarinana-Herrera, who worked for Apex Rockfall Mitigation, a Grand Junction-based company that CDOT has contracted to do the rockfall mitigation project.

The accident did not appear to be suspicious according to a statement from the Jefferson County Sheriff’s Office, though investigators are looking into the cause of the fall. The $3 million project started in late February and will continue through April 30th. Crews are removing scaled rock and installing mesh anchors to prevent future rockfalls.

CDOT has publicized that they will conduct daytime full road closures on US Hwy 6/ Clear Creek Canyon between Hwy 93, Hwy 58, and Hwy 119, for rockfall mitigation. Construction will include rock-scaling, removal of scaled rock, installation of rock reinforcement, rock anchors, mesh anchors, and 285,000 SF of wire mesh. The project will be in operation Monday through Wednesday, 10 a.m. to 5 p.m. and Thursday, 6 a.m. to 5 p.m. During this time, there will be no parking or access for recreation use. Motorists can use I-70 as an alternate route during construction hours/full closure. If you have questions or concerns or if you would like to receive construction updates, call 970-549-0322, or email at us6clearcreek@gmail.com.

END_OF_DOCUMENT_TOKEN_TO_BE_REPLACED

Benefitting the county, schools, and much more By Don Ireland   This year marks the 30th anniversary of casinos opening in the former little mining towns of Black Hawk, Central City and Cripple Creek, Colorado. In those early years, smoking was allowed inside ... END_OF_DOCUMENT_TOKEN_TO_BE_REPLACED