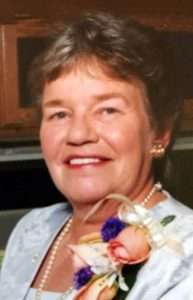 She was born on June 29, 1935 in Chicago, Illinois to William and Margaret Rollins.

A petroleum engineer, Bob and Midge lived in the “Oil Patch” in Colorado and Wyoming. Midge had three daughters and a son in the next ten years.

While raising her four children as a single parent, she owned and operated two Swiss Colony stores for two decades, and then a real estate development company in Denver, Colorado.  Her greatest joy, however, was her passion for the piano in accompanying vocalists. She was an accomplished pianist who could “sight” read almost any musical score placed in front of her. With her own improvisations, she often made the music come alive, even if she had never heard the song before. She directed several church choirs during her life, and played for musical theatre groups in Central City, Colorado where she lived for many years before moving to Bozeman in 2012. She continued sharing her musical talent in Bozeman where she played for and sang for several groups including the “Singing Souls” at the Senior Center and accompanied church services at the Bozeman Lodge on Sundays. Family and friend get-togethers always included gathering around the piano, voices raised in song, laughter and joy.

Midge had many other talents. She was a loving mom, a cherished grandma, a steadfast friend, a kind caring listener, a wise advisor, a voracious reader, and a crossword puzzle maniac.

For friends and family alike she will be remembered most for harmonizing the human voice with the magic of a piano. We know that she is joyfully playing a perfectly tuned grand piano and singing with the angels.

Arrangements are in the care of Dokken-Nelson Funeral Service. www.dokkennelson.com

END_OF_DOCUMENT_TOKEN_TO_BE_REPLACED

Where the dead get to tell their story By Jaclyn Schrock On Saturday, August 21, the Gilpin Historical Society held their annual Cemetery Crawl. Tickets allowed the shuttle of hundreds of guests from the Teller House parking lot to the Cemetery. Depending on v... END_OF_DOCUMENT_TOKEN_TO_BE_REPLACED