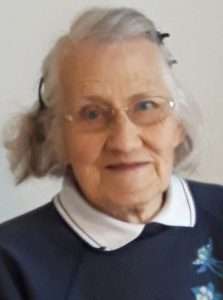 Lucille Martha Hanggee Scheufler passed away on April 11, 2020 in Aurora, Colorado.
Lucille (Lucy) was born on August 19, 1930, in Dayton Plains Michigan, to Joseph and Virginia Hanggee.

She graduated from Sterling College in Kansas, married Charles Russel Scheufler and later moved to Colorado where, for several years, they owned an insurance agency and numerous Christian book stores.

Later Lucy worked for the US Post office where she retired.

She enjoyed tending to her plants and flowers around her mountain home, watching the hummingbirds, playing her piano and most of all she enjoyed her dogs and her community. She regularly attended the First Baptist Church in Golden, Colorado.
She is survived by her brother Sanford Hanggee of Aurora, Colorado and her son Johnathan Scheufler of Minnesota.

Mrs. Scheufler is preceded in death by her father Joseph, mother Virginia, husband Charles, and brother David.
Internment will take place at Dory Hills Cemetery at a later time.

END_OF_DOCUMENT_TOKEN_TO_BE_REPLACED

Where the dead get to tell their story By Jaclyn Schrock On Saturday, August 21, the Gilpin Historical Society held their annual Cemetery Crawl. Tickets allowed the shuttle of hundreds of guests from the Teller House parking lot to the Cemetery. Depending on v... END_OF_DOCUMENT_TOKEN_TO_BE_REPLACED