Lots of swearing in Black Hawk 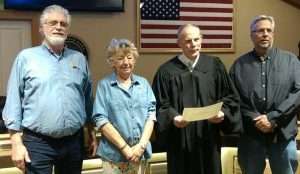 City to auction off surplus equipment

A recess was scheduled after the workshop was completed to resume at the normal 3:00 pm time for Black Hawk City Council meetings at 211 Church Street. A table of healthy snacks was provided with sandwiches, fresh fruit, cookies, gluten free marble cake, and beverages and were appreciated by all those in attendance.

City Council resumed with the Pledge of Allegiance, finding no agenda changes, or conflicts of interest attention moved directly to the introduction of new Employee Joseph Lopez as Fleet Custodian. Lopez has been working for the City of Black Hawk since October 2017. Previously he had worked in maintenance with Southwest Plaza Mall in Littleton. He very much enjoys learning his job with Black Hawk coworkers. Joseph’s wife and 13 year old son, Ellis, appreciate this good career opportunity that allows them to enjoy family activities. Ellis was adopted from Russia when he was 12 months old, and is in his first year of 4H this year. The family has two horses – Poco is a Morgan, and Cooper is a miniature horse less than 34 inches tall at the base of his mane. Besides enjoying riding horses and fishing, Joseph has hiked 15 of the 14ers in our State. Welcome to the community Joseph!

Sheriff Bruce Hartman made a historic presentation of Colorado Territorial Counties to the Black Hawk City Council. Sheriff Hartman had met up with the Sheriff in Yuma, Colorado to discover a map of the Territory of Colorado showing each county’s information from 1856-1889. Copies were made so Sheriff Hartman has presented them to Gilpin County Commissioners, City of Central, and the City of Black Hawk. Everyone appreciated that the frame was made by Roy Blake, born and raised in Black Hawk who passed away September 2017.

There were no requests from the public to make any comments on agenda items. The council then approved the minutes of the March 14, 2018 meeting with no changes.

With appreciation noted for previous service to the City of Black Hawk City, the Council anticipated the continued service of three Aldermen whose terms had expired, but were renewed now another four years. Each prepared to run for election again, but there were no candidates running against them, so the April election was cancelled. This made possible a swearing in of incumbents. Alderwomen Linda Armbright has served 11 years, Alderman Jim Johnson served seven years, and Alderman Hal Midcap eight years, in two terms, the first beginning in 1995. Municipal Judge Ronald Carlson officiated the swearing in. With right hands raised, the incumbent Aldermen promised to uphold the Constitution of the United States of America, the State of Colorado, and the Charter and ordinances of the City of Black Hawk.

Finance Director Lance Hillis reviewed the 2017 budget revision with funds already approved by the City of Black Hawk City Council previously in 2016 for the 2017 budget. Revisions included an increase of approximately $31,000 in total transportation fund expenses, $6,818,000 in total capital projects fund expenses for the St. Charles and Gregory Street realignment projects, and from bond interest an adjustment of $1,723 in the debt service fund expenses. Resolution 22-2018 passed with no discussion, unanimously.

City Attorney Corey Hoffman explained the next item as being unique to require it to be both a public hearing and an action item. All the appropriate steps have been taken by project manager Sarah Beatty for this special events liquor permit. Thursday, May 3, 2018 at Crook’s Palace, 200 Gregory Street in Black Hawk will be the special event sponsored by American Culinary Federation (ACF) Colorado Chef’s Association for the Black Hawk Casino Chef’s Cook-Off and Fundraiser. There were no public comments made concerning the event so the permit was approved.

Resolution 23-2018 approving the licensing agreement between the City of Black Hawk and ACF Colorado Chefs Association to permit the use of Crooks Palace for the fundraising cook-off. With no further discussion this resolution passed.

Police Chief Stephen Cole spoke of the variety of items the city has from various departments taking up space. Alderman Jim Johnson asked if the intention was to simply dispose of the items. Chief Coles responded that there are items that could be donated or sold to other municipalities. Cole stated that many local government entities are using companies to dispose of unneeded surplus equipment and it is the City’s intention to utilize the auction process to dispose of surplus items. Auctions can ensure the City receives fair market value for the items. The City can also mandate the buyer disassemble, remove and/or transport large items relieving the City of that responsibility. The city also receives an itemized list of the items sold to ensure accountability

The surplus property to be disposed of by Resolution 23-2018 falls into the following five (5) general categories:

City Attorney Corey Hoffman explained that these tax rebate resolutions 25, 26, and 27-2018 were extensions of a two year tax rebate resolved in 2016 that expired April 2018. These new resolutions will extend the City Use Tax rebate two more years to April 2020.

Resolution 25-2018, a Resolution Temporarily Rebating City Use Tax on Construction and Building Materials for Residential Projects within the City’s National Historic Landmark District.

Resolution 27-2018, a Resolution to Encourage Diversification of the City’s Local Economy by Extending the Waiver of Use Tax on Renovation Projects.

All three resolutions passed separately. City Manager Jack Lewis and City Attorney Corey Hoffman had no reports so the meeting was adjourned at 3:15 pm.

END_OF_DOCUMENT_TOKEN_TO_BE_REPLACED

Benefitting the county, schools, and much more By Don Ireland   This year marks the 30th anniversary of casinos opening in the former little mining towns of Black Hawk, Central City and Cripple Creek, Colorado. In those early years, smoking was allowed inside ... END_OF_DOCUMENT_TOKEN_TO_BE_REPLACED

Benefitting the county, schools, and much more By Don Ireland   This year marks the 30th anniversary of casinos opening in the former little mining towns of Black Hawk, Central City and Cripple Creek, Colorado. In those early years, smoking was allowed inside ... END_OF_DOCUMENT_TOKEN_TO_BE_REPLACED